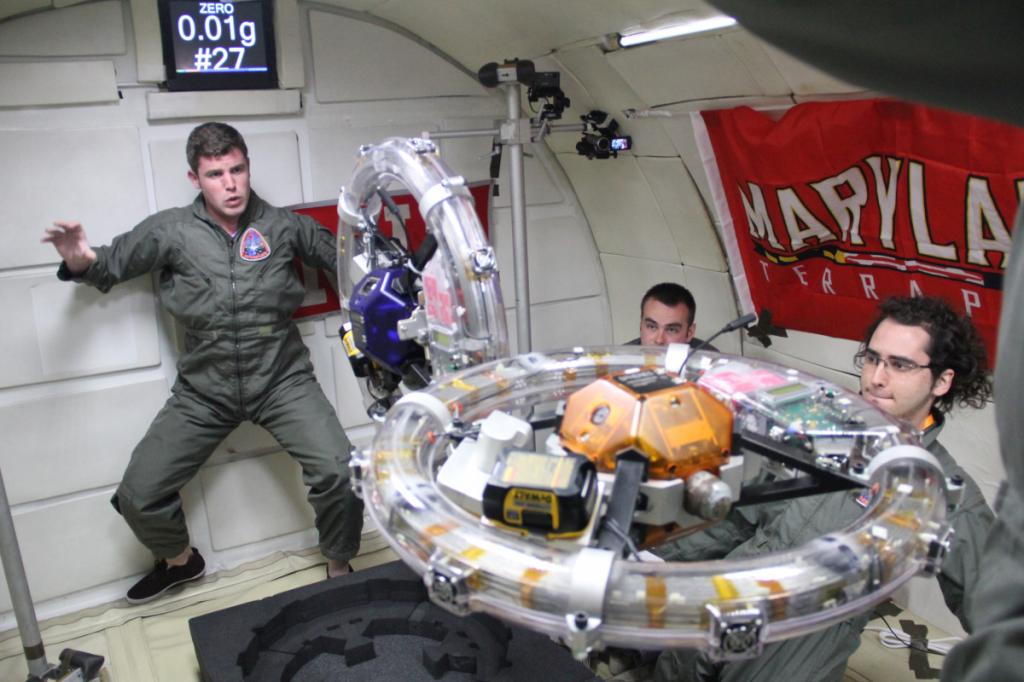 And here is a video: RINGS on a Reduced Gravity Flight. Looks like they tested the "rotate mechanism".

How exactly would these two devices propel themselves forward? Even if we assume they have an infinite energy supply from solar arrays.

Is it possible to use Earth's electromagnetic field to develop some similar propulsion technology?

The technology referred to here is called electromagnetic formation flight (PDF warning). It's a project out of MIT, and Raymond Sedwick is continuing development at the University of Maryland (the RINGS work above is from his team).

The important thing to remember here is that this system is meant for "control of relative separation, relative attitude, and inertial attitude ... by creating electromagnetic dipoles on each spacecraft" (from here, emphasis is mine). So basically you need at least two spacecraft with this technology flying in formation, which is useful for all sorts of types of missions.

There are details in the papers, but the system essentially uses the effect of the like poles of a pair of magnets repelling, while opposite poles attract. Electromagnets are used on-board to modify the magnetic fields of the two spacecraft relative to each other, while reaction wheels help with attitude control.

There is no inertial maneuvering capability here, only relative position control. This gets close to the topic of using tethers to collect electricity which would then be used to power some traditional electric propulsion system, but here, there are no consumables and no ability to change inertial orbits.

Normally, precision control of spacecraft formations requires a significant amount of maneuvering to overcome the effects of differential perturbations, such as nodal drift or drag. Even if you can do it very efficiently, eventually your propellant budget is going to limit your operational lifetime. That seems to be the motivation with this work: maintaining the relative formation without using consumable propellant. If you wish to raise your formation by 100km to overcome the effects of drag in LEO (for instance), that still must be done with a thruster or EP system of some kind.

Not the answer you're looking for? Browse other questions tagged propulsion attitude magnetic-field or ask your own question.