Most distant photo of the sun?

What is the most distant photo taken of our sun? I am guessing it may be from Voyager 1, but can't find an actual photo anywhere. 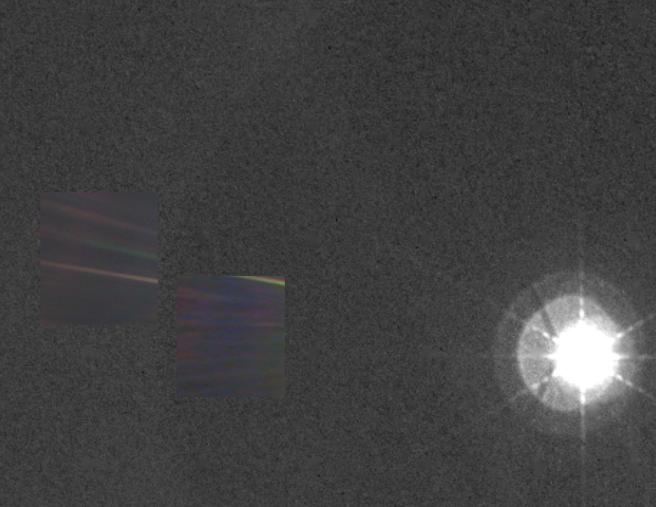 Voyager 1 took an image of the sun on February 14, 1990 at a distance of 6 billion kilometers. The famous Pale Blue Dot was captured at the same time and is superimposed here as well as a narrow angle view of Venus.

This color image of the sun, Earth and Venus was taken by the Voyager 1 spacecraft Feb. 14, 1990, when it was approximately 32 degrees above the plane of the ecliptic and at a slant-range distance of approximately 4 billion miles. It is the first -- and may be the only -- time that we will ever see our solar system from such a vantage point. The image is a portion of a wide-angle image containing the sun and the region of space where the Earth and Venus were at the time with two narrow-angle pictures centered on each planet. The wide-angle was taken with the camera's darkest filter (a methane absorption band), and the shortest possible exposure (5 thousandths of a second) to avoid saturating the camera's vidicon tube with scattered sunlight. The sun is not large in the sky as seen from Voyager's perspective at the edge of the solar system but is still eight million times brighter than the brightest star in Earth's sky, Sirius. The image of the sun you see is far larger than the actual dimension of the solar disk. The result of the brightness is a bright burned out image with multiple reflections from the optics in the camera. The "rays" around the sun are a diffraction pattern of the calibration lamp which is mounted in front of the wide angle lens. The two narrow-angle frames containing the images of the Earth and Venus have been digitally mosaiced into the wide-angle image at the appropriate scale.

From PIA00450: Solar System Portrait - View of the Sun, Earth and Venus - NASA

This was the famous Voyager 1 "Family Portrait" The distance was just over 40 AU. This is actually the furthest image that has ever been taken away from Earth; after this the camera was shut off. Voyager 2 never attempted such a photo. New Horizons isn't that far out yet, although it will take pictures from further away, and I suspect that after all is said and done it might try to do a similar family portrait... but not until all of the data is received from its extended mission.

Not the answer you're looking for? Browse other questions tagged voyager the-sun photography or ask your own question.

8
What is the brown band in which we find the pale blue dot that is Earth?

25
How long will communication with the Voyager probes continue?
30
Who took the Curiosity rover's self-portrait photo from the surface of Mars?
1
Is this the first photo of Jupiter's ring(s) from deep space?
6
How many spacecraft have taken a “Pale Blue Dot” type photo of the Earth from beyond cis-lunar space?
41
Would we be able to detect an extraterrestrial “Voyager” if it came near us?
19
Could New Horizons take a “Pale Blue Dot”-like image this year?
22
Why was Canberra able to listen to Voyager 2 but not talk to it?
5
When will Voyager 2 overtake Pioneer 10 as the 2nd most distant spacecraft from the Sun?