Why does DSCOVR's camera EPIC see at least 13 sunrises and sunsets per day?

In this NASA Goddard YouTube video titled "One Year on Earth – Seen From 1 Million Miles", I've gotten stuck on the line

In this view, EPIC sees the Sun rise in the west, and the Sun set in the east, at least 13 times a day.

edit: Listening carefully, it's "...see the sunrise... and the sunset..." and not "...see the Sun rise... and the Sun set...", so my transcription is not correct. I'll leave it, along with this note, because the distinction is important. I only caught it after reading the nice, concise answer by @Leorex through carefully.

DSCOVR is in a Lissajous orbit about the Sun-Earth L1 Lagrange point between the Earth and the Sun, and the EPIC camera points towards the earth which remains nearly 100% sunlit.

A given point on earth sees about one sunrise and one sunset per day, and the Lissajous orbit gently rocks back and forth slightly with roughly a six month period.

I don't understand what it is that is happening at least thirteen times a day. Can someone help me understand this? 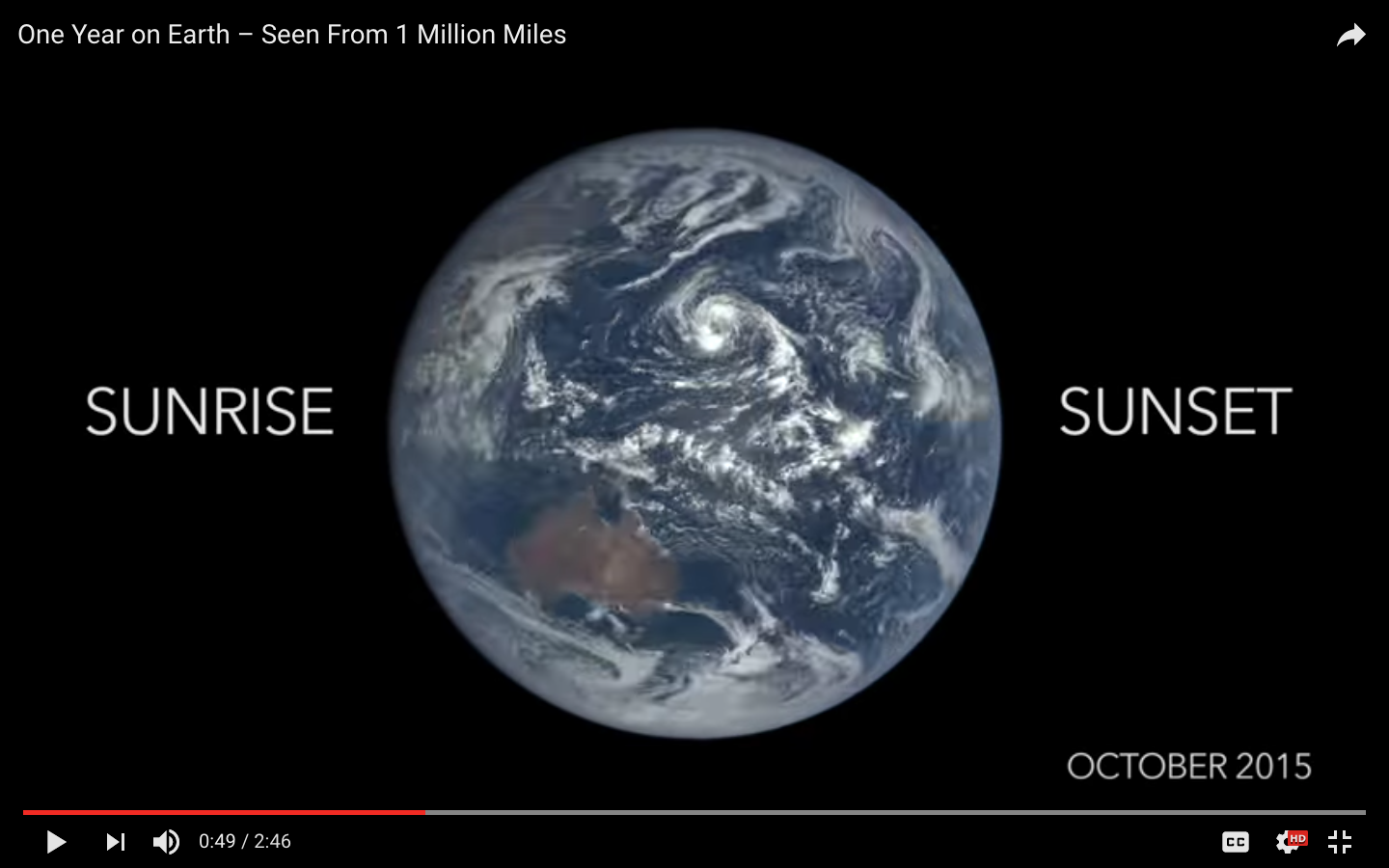 above: Screen shot during the quoted line. Start playing at 00:44 to hear it.

In this view, EPIC sees the Sun rise in the west, and the Sun set in the east, at least 13 times a day.

This is incorrect. This statement is based on the planned activity of sending home at least 12 images a day. Communication link restrictions and the higher priority of the scientific instruments on DSCOVR over EPIC means that this does not always happen. Saying that EPIC takes 12 images per day does not sound very exciting. Saying that EPIC "sees the Sun rise in the west, and the Sun set in the east, at least 13 times a day" somehow does seem exciting. It is however deceiving. Because DSCOVR is in a Lissajous orbit about the Sun-Earth L1 point, almost all of the portion of the Earth visible to DSCOVR (and hence to EPIC) is fully sunlit.

Editorial comment: It would have been much better to simply say that "In this view, EPIC sees almost half the globe, almost all of which is fully sunlit. Because of the Earth's rotation, and because EPIC takes at least 12 images per day, it sees almost every part of the sunlit Earth, every day."

A different satellite (which does not exist) could provide a lot more than 12 fully-sunit images per day, but that satellite does not exist. Twelve pictures a day might not be that much, but it is a lot better than none.

In your embedded YouTube video, at 1m 16s EPIC's Lead Scientist Jay Herman says, "Epic takes at least one set of images about every two hours."

I've accepted the great answer by @Leorex. I went back and found that the video has closed captions (the little [CC] thing) and indeed my original transcription was wrong.

EDIT: and then I looked at the whole thing again six months later, after this answer and decided that no, the problem is more than just confusing "sunset" for "sun set". @DavidHammon's logic is inescapable, as usual. 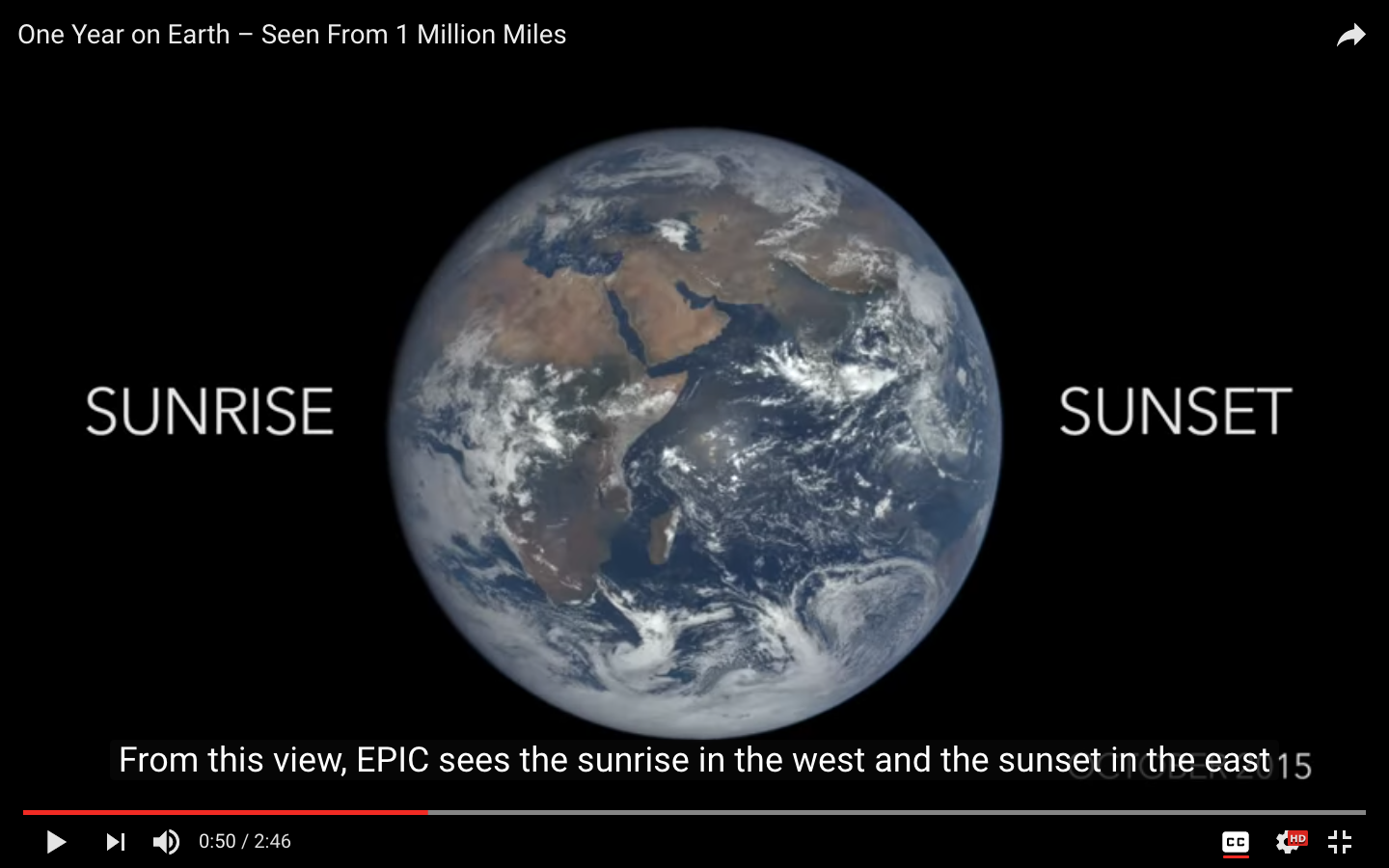 Not the answer you're looking for? Browse other questions tagged lagrangian-points dscovr or ask your own question.

4
What would be the delta-v of rendezvousing with temporarily captured asteroids in Sun-Earth L-points?
6
What is the timeliness of DSCOVR-EPIC image acquisition and public release?
12
Are some Halo Orbits actually Stable?
1
Why has the Earth-Sun libration point L1 been chosen over L2 for NEOCam to detect new NEOs?
1
How could the recently explained “glints” seen by DSCOVR appear so compact considering the finite size of the sun?
5
Why are images from DSCOVR EPIC unavailable for certain dates?
3
Why Are EPIC/DSCOVR Images delayed for a day?
2
Why hasn't DSCOVR's trajectory determination been updated in JPL's Horizons after 2015-Aug-4?