What are the most serious injuries that astronauts have suffered while in orbit?

Among astronauts in orbit, what is the worst real injury recorded? Has anyone hit himself on the thumb with a hammer or something? Squeezed a finger in a closing door? Gotten poisoned by some leaking experiment mystery box? I bet they haven't hurt their backs while lifting something heavy, or fell from high altitude or were run over in traffic.

So, what makes our astronauts bleed the most?

This question wants to ignore the lethal space flight events which were all related to launch or landing (or suborbital flight, including the Soyuz 18 launch abort in 1975 which gave one of the crew unspecified internal injuries). Instead it is about how humans have hurt themselves the worst while being in the orbital weightlessness of the ISS, Mir, Salyut, Shuttle and other crewed orbiting vehicles.

According to this Wikipedia list out of all the about 540 astronauts to orbit as of today since 55 years, I only find this single injury from 1995:

While exercising on the Mir EO-18/NASA 1/Soyuz TM-21 mission, astronaut Norman E. Thagard suffered an eye injury. He was using an exercise device, doing deep knee bends, with elastic straps. One of the straps slipped off of his foot, flew up, and hit him in the eye.

Fortunately, it was just a tiny discomfort:

Later, even a small amount of light caused pain in his eye. He said using the eye was, "like looking at the world through gauze."

And could quickly be cured:

An ophthalmologist at Mission Control-Moscow prescribed steroid drops and the eye healed.

Is it true that no astronaut ever was injured in space? With injury defined as for example worse than what the majority of us all experience within six months or so from everyday life on Earth (like a sprained ankle).

EDIT: I want to include illnesses here too. If any astronaut ever has gotten ill, instead of injured, by orbital spaceflight. Like having to spend two weeks nearly unconsciously in bed with high fever, like tens of millions of people do right now. Everyday Earthly stuff like that, has any astronaut ever suffered from something like that?

The crew of Apollo 7 were all ill. The commander, Wally Schirra, developed a cold and the other two crew members suffered prolonged motion sickness.

Due to the illnesses, the crew failed to perform their duties (such as perform the live television broadcast) and all were retired from spaceflight. Even today, it is not publicly known if they performed the landing with the helmets off as they had threatened to do, due to concerns of their ears popping.

Wikipedia has a concise description of the events, with the exaggerated title "Mutiny" in Space. Here is an excerpt of the comms:

SCHIRRA: You've added two burns to this flight schedule, and you've added a urine water dump; and we have a new vehicle up here, and I can tell you at this point TV will be delayed without any further discussion until after the rendezvous.

CAPCOM 1: All we've agreed to do on this is flip it.

CAPCOM 1: All we have agreed to on this particular pass is to flip the switch on. No other activity is associated with TV; I think we are still obligated to do that.

SCHIRRA: We do not have the equipment out; we have not had an opportunity to follow setting; we have not eaten at this point. At this point, I have a cold. I refuse to foul up our time lines this way.

The Mars Society has a good indication of what the most serious medical issues have been in space flight. These include:

Of course, the most serious incident in orbit was Soyuz 11, which occurred in the processing of reentering. When the service module disconnected, it left a vacuum exposed vent open, which lead to the death of all 3 cosmonauts.

While I'm not sure it would qualify as a physical, bleeding injury, there was a near-death from drowning in space. Luca Parmitano, was an Italian NASA astronaut who nearly drowned during an EVA in July, 2013.

It was so unexpected that NASA hadn't even planned emergency procedures for an incident like this. After all, what are the chances of drowning in space?

His helmet had a water leak and filled up with water. By the time he got back to the airlock, he was hardly able to breathe or even see through the water.

You can read more about it here: http://www.space.com/24835-spacesuit-water-leak-nasa-investigation.html

Some crewmembers have been incapacitated by Space Adaptation Syndrome (SAS) as they adapt to the free fall environment. The most publicized case of this was "Payload Specialist" Jake Garn who was so sick on his space junket that his name became the standard unit of spacesickness, where 1 garn = completely incapacitated.

Less severe cases have caused mission timeline impacts such as the rescheduling of an EVA on STS-122.

It is well known that finger injuries sustained during EVA plagued a lot of astronauts. The Lunar Surface Journal for Apollo 15 has some good references to this at 126:08:40, with links to post-mission photographs of Dave Scott clearly showing the damage to this fingernails and giving a good indication of the extent of the blood blisters that formed.

In fact, post-mission reports for 15 indicate that it wasn't just fingernails. Gene Cernan even complained of blisters between his thumb and forefingers and reported that his knuckles were rubbed raw and bloody against the inside of his suit.

The astronauts powered through and kept working, but in long-duration missions this type of injury would surely have to be dealt with. It was largely unforeseen in earlier mission but had the Apollo missions been of a longer duration this would surely have impacted the duration and amount of EVA's performed.

A relatively large number of US astronauts who performed EVAs have injured their shoulders badly enough to require surgery. At the time this study was performed (2012) there was no definite conclusion as to whether the injuries resulted from orbital EVAs or training. 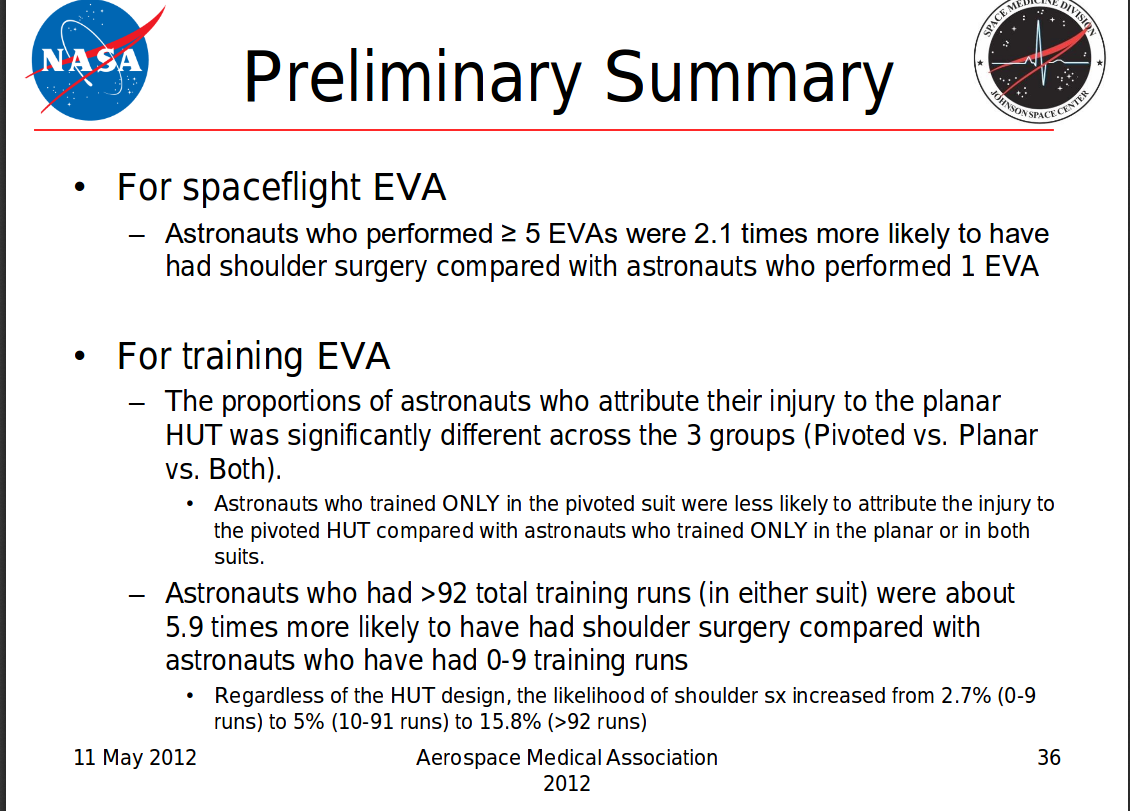 I think the worst injuries sustained have been the deaths of the crew of Soyuz 11. The crew capsule depressurized during preparations for reentry.

Not the answer you're looking for? Browse other questions tagged crewed-spaceflight history astronauts health risk-management or ask your own question.

37
Would a broken arm/ leg be more painful in zero gravity?
13
What is the most heated exoatmospheric conflict to-date?
7
How soon was the Garn scale of nausea established after the senator's spaceflight?

14
Do the majority of astronauts experience space sickness while adapting to micro-gravitational conditions?
19
How many astronauts have had spiritual experiences while in space?
29
What are the "unpleasant effects" of having a cold in microgravity?
5
What is the probability that a deep space crew is hit by a Solar proton storm?
11
What kind of time regiment/schedule do ISS astronauts have?
6
What are the most difficult challenges SpaceX will face getting astronauts to Mars by about 2025?
3
What immunizations (vaccines) are required for astronauts?
12
What is this device/object that the SpaceX astronauts are holding?
0
What are the main impacts on the body of an astronaut exposed to long term zero gravity?
5
How does NASA count the order that people have entered space?