Would it be possible to build a probe that could operate at about 480 °C (900F degrees) without insulation?

I read a question about cooling a Venus lander, and got to thinking that the problem was in building a probe that has no problem with Earthlike temperatures and pressures, then trying to insulate it so that it could last long enough to send back useful information before dying from the heat.

So why not build probes that aren't affected by the prevailing conditions? I recently read this article about microelectronics using vacuum tube technology.

There are other potential uses for probes that operate at high temperatures and pressures: Sun divers and probes into the gas giants.

@DavidVomLehn is right. I've just read news today of a the recent paper Prolonged silicon carbide integrated circuit operation in Venus surface atmospheric conditions. See also Ars Technica's We finally have a computer that can survive the surface of Venus. Small circuits were fabricated on semiconductor wafers made from silicon carbide rather than silicon, and there were tested for extended periods of time while they were subjected to a Venus-like temperature of 460C and Venus-like pressure of 9.4 Mbar (about 94 standard atmospheres).

The circuits were ring oscillators, a standard test structure used in IC testing. SiC JFETs were used to build rings of NOT gates (inverters) containing an odd number of gates; read more here. This configuration doesn't have naturally stable state, so it naturally oscillates. Changes in the oscillator's waveform shape, amplitude and frequency provide information on changes in the circuit, which caused by several different effects involving both the silicon carbide crystal itself, and the implanted/diffused dopants, metallizations and insulators.

SiC can crystallize into several different structures, and 4H-SiC was probably chosen for it's very high band gap. For comparison, silicon is only 1.1 eV. When we say "room temperature is 1/40th of an eV (or 0.025 eV) that's the product of the Boltzmann constant $k_B$ (about 8.62E-05 eV/K) and the temperature (20C or 293K). While the high temperature and pressure and naughty chemistry presents several mechanical and chemical insults on the chip, the temperature has a profound effect on the electronic properties of the semiconductor.

While the math for doped semiconductor devices is more complex, the simple exponential term from the carrier concentration of an intrinsic semiconductor is enough to show the importance of high band gap;

For silicon with a band gap of about 1.1 eV, that value starts at about $10^{-19}$ at 293K but rises to the order of $10^{-8}$ at 733K! It would be so highly ionized (so many of the silicon atoms would have produced carrier electrons) that it would be far too conductive to function as a semiconductor or near-insulator when needed.

On the other hand, in the case of 4H-SiC with a bandgap of 3.2 eV, those numbers go from an amazingly low $10^{-55}$ at 293K (you'd think of it as a ceramic or crystaline insulator, not a semiconductor) and rises only to the order of $10^{-22}$ at 733K! SiC at Venus temperatures would be a suitable starting semiconductor material in the same way that silicon would be at room temperature. Of course the carrier concentration of intrinsic SiC could be raised by doping, but there's no way to recover from a too-high value for silicon on Venus. 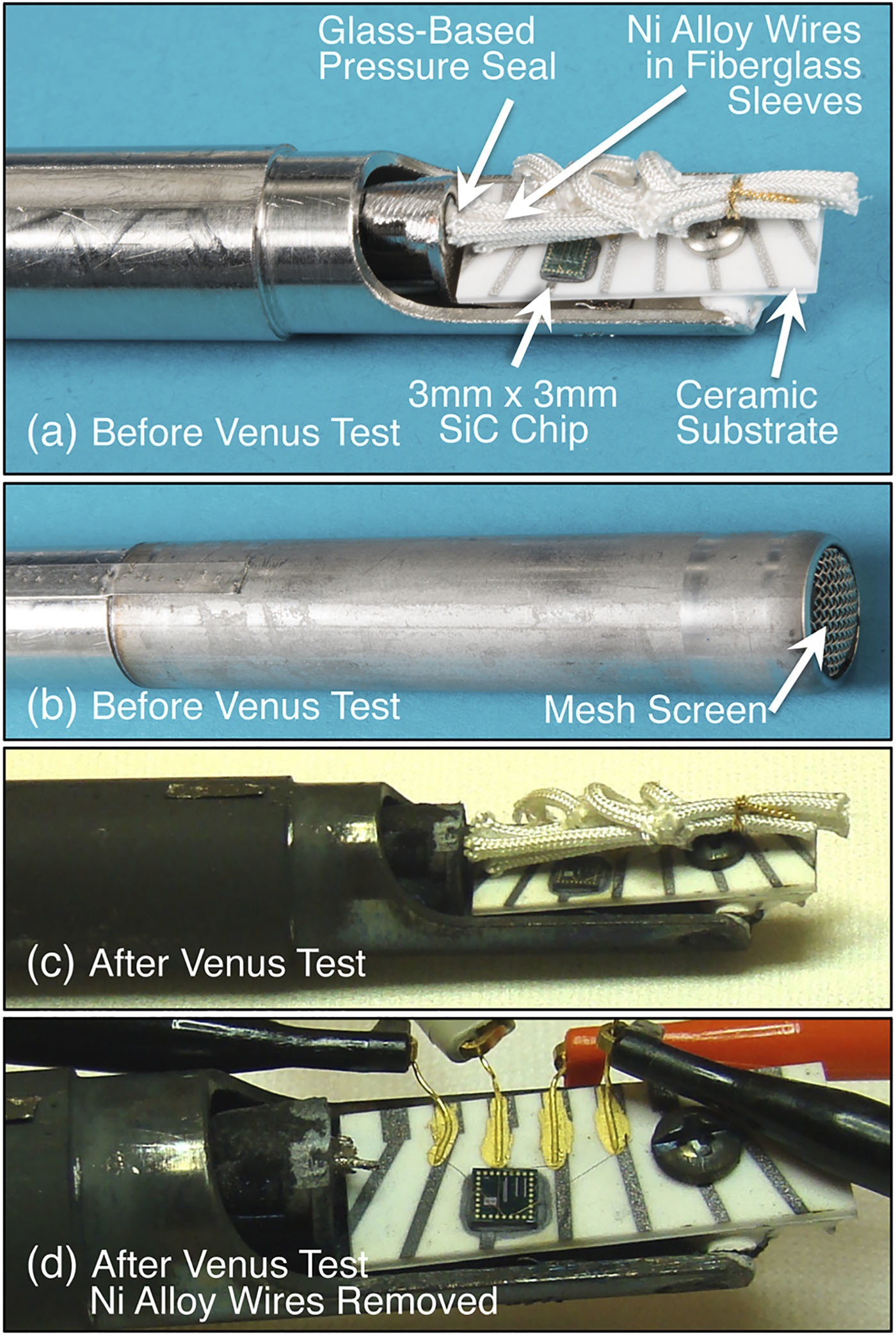 above: Figure 1 from the paper. Before and after being tested under Venusian atmosphere parameters. 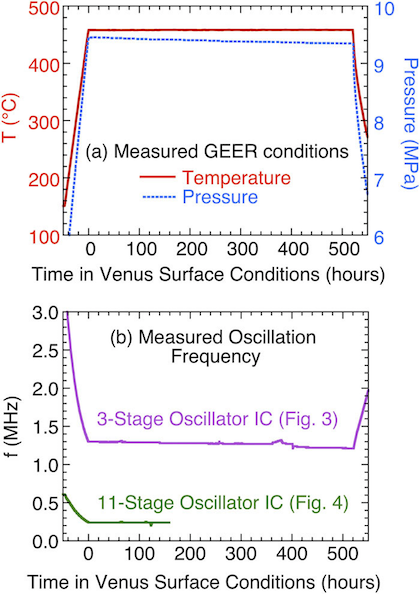 above: Figure 2 from the paper. The drop in ring oscillator frequency shows the JFETs switch faster at elevated temperature, which is an effect that can be tolerated with proper circuit design. The loss of signal from the 11 stage oscillator was found to be a connection problem - the device continued to work once better connections could be made after the conclusion of testing. 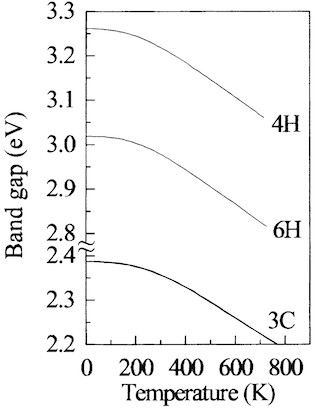 above: Band gap energy of various crystal forms of silicon carbide, vs temperature. From here.

In addition to vacuum tube technology, NASA is looking into high temperature semiconductors for use with Venus probes.

7
Could a fan be used to prevent overheating on a Venus bound space probe?
27
Is there any demonstrated or even proposed technology that can sterilize a spacecraft with 100% certainty and yet leave it electronically functional?
19
Potential high temperature power sources for a Venus lander
11
Why did the Herschel Space Telescope need helium coolant?
8
How does the Parker Solar Probe's heat shield protect it from dust near the sun?
7
What are the technical challenges in building a Titan rover that didn't need heating?
2
Is there anything like a standard for maximum temperature for mission-critical electronics in spacecraft?
11
How can the Parker Solar Probe survive passing within 4 million miles of the sun's surface?
3
When was the last normal electron tube (valve) for electrical circuitry launched into space?
4
Temperature of photovoltaic cells vs efficiency - is it ever actively controlled?
See more linked questions