When there is more power than needed, are satellite photovoltaics shunted or open circuit?

I saw the word "shunts" in this answer about DSCOVR's upgraded photovoltaic arrays when it was unmothballed and readied for space. Reading it, I get the idea that shunts are used to dissipate the difference in power between what the satellite needs and what the array is producing.

In this answer which is actually about silicon PVs on the ISS, it is mentioned that when entire arrays are offline, they get hotter, and I'm assuming this is because they are left open-circuit and so all the electron-hole carriers remain in the junction and recombine, returning their energy as heat.

And I'm also wondering that if you need less than the full amount of energy, if you had a modern switching power supply to condition the voltage, wouldn't you just draw less current, instead of full current and shunting some into a big hot resistor?

So to narrow the question down I should ask about modern designs and recently built and launched satellites. I'm thinking communications satellites, but since DSCOVR received a modernized system, that's OK too. Of course if there is something more compelling, that's fine, but the ISS can be a separate question because there are issues of legacy and compatibility.

I wasn't sure if your last sentence meant that you didn't want to hear about the ISS, but in case you do, in the case of the ISS, they are shunted. The device that handles this is the Sequential Shunt Unit (SSU). The SSU is the primary power regulation device that controls Solar Array Wing (SAW) output. There is one SSU per power channel/SAW. The function of the SSU is to manage the output of the solar cells to produce 160 V dc. The SSU maintains this voltage by balancing the system demand with the number of connected array strings in the SAW. Each array string can be individually connected or disconnected from the primary power bus, thus the output from the SSU is the sum of all connected strings at any given time. Array strings that are disconnected from the power system are shunted (shorted back to the array itself).

A high level graphic from here. 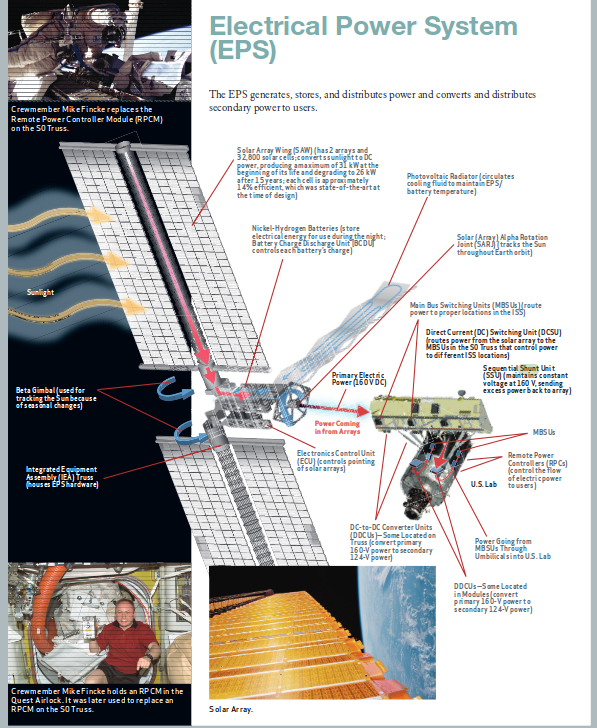 For what it's worth, the SSU on power channel 3A shorted out in May 2014 leading to the loss of its associated power channel (1 of 8). It was replaced during an EVA in October 2014.

This is just a short answer addressing the headline question. I apologise for the short answer, I don't have time at the moment to dig out references or a full explanation as the answer comes from experience.

Whilst I haven't heard of a real design example, the "rotate to catch less sunlight" would improve cooling but would presumably have to be used in conjunction with one of the regulators in order to allow the voltage to remain stable to changing loads.

One might go a step further and look into whether we care much about reducing the array temperature. A cooler array is usually more efficient, however this question came up in attempting to understand the oversupply situation and so efficiency is irrelevant. A significantly higher prolonged temperature could in principle lead to increased defects and failures though I haven't seen this cited as a degradation factor for typical array temperatures.

The video of the shuttle leaving the ISS that is linked to from one of the links in the question is curious. Its really interesting to see that the arrays appear to have a striped pattern. This might indicate sections working at different temperatures on account of regulator action. This could occur in a series regulator but this is inconsistent with the assertion of a shunt regulator from Organic Marble's answer. Of course we don't know where the shunt loads are. Its possible that if the shunt is a direct short then the cells themselves are the shunt load and unused sections could still run hotter than connected sections. On some satellites, perhaps where the dimensions are lesser, shunt loads can provide useful thermal maintenance for other parts of the satellite.

Not the answer you're looking for? Browse other questions tagged artificial-satellite solar-power communication-satellite or ask your own question.

8
What are these very large, square panels on Inmarsat 5?
10
Why does DSCOVR appear to be missing solar cells?
4
Why do the ISS' Thermal Rotary Radiators need to tilt?
1
Why did Voyager have to shunt unused electrical power and radiate as heat?
3
Solar cell heating vs power draw
3
Has anyone reported looking for bandgap photoemission from III-V solar panels on spacecraft? Has any success ever been reported?

9
Have there been individual satellites that have been deployed and recovered more than twice?
4
Are there any related groups of satellites that are in a line of 6 or more in a row?
9
What do large, modern communications satellites look like inside (roughly at least)?