Visiting friends in the Northern Tablelands of NSW. I went outside and observed a clear diffuse blob to the north of Scorpio. At first I thought, comet, however binoculars revealed a characteristic rocket plume shape. The diffuse blob dispersed over the following hour.

I pulled out the camera and tripod, took two sets of shots, one wide area, one more zoomed in on the plume. About 10 images of 15 seconds each, F4.5. I then stacked each set, and average/fused the individual images (using Hugin, on OSX) to produce two images with more subtle detail. This was necessary to capture the plume location with respect to background stars, with just a mid range semi DSLR Camera. There had already been some drift from first sighting of more than a degree.

I have then combined the two photos, the close up within the wide view, so as to provide a location image of the plume as seen from this location. The plume moved and dispersed with respect to the background stars over the time it took to take the two series of photographs as indicated in the final composite photo. (Note purple oval and arrow in photo.)

Total sequential image taking took about half an hour. Processing about 3 hours. Another half hour to put this post together.

The observation location is in the Australian Eastern Standard Time (AEST) +10 hours to UTC time zone, and I began taking photos close to midnight (within an hour) on 28 July, moving into the early hours of Fri 29 July. The observational ground location was 151˚ 39' East, and 30˚ 01 Min South.

Anyone able to identify what rocket launch or other event this might be? 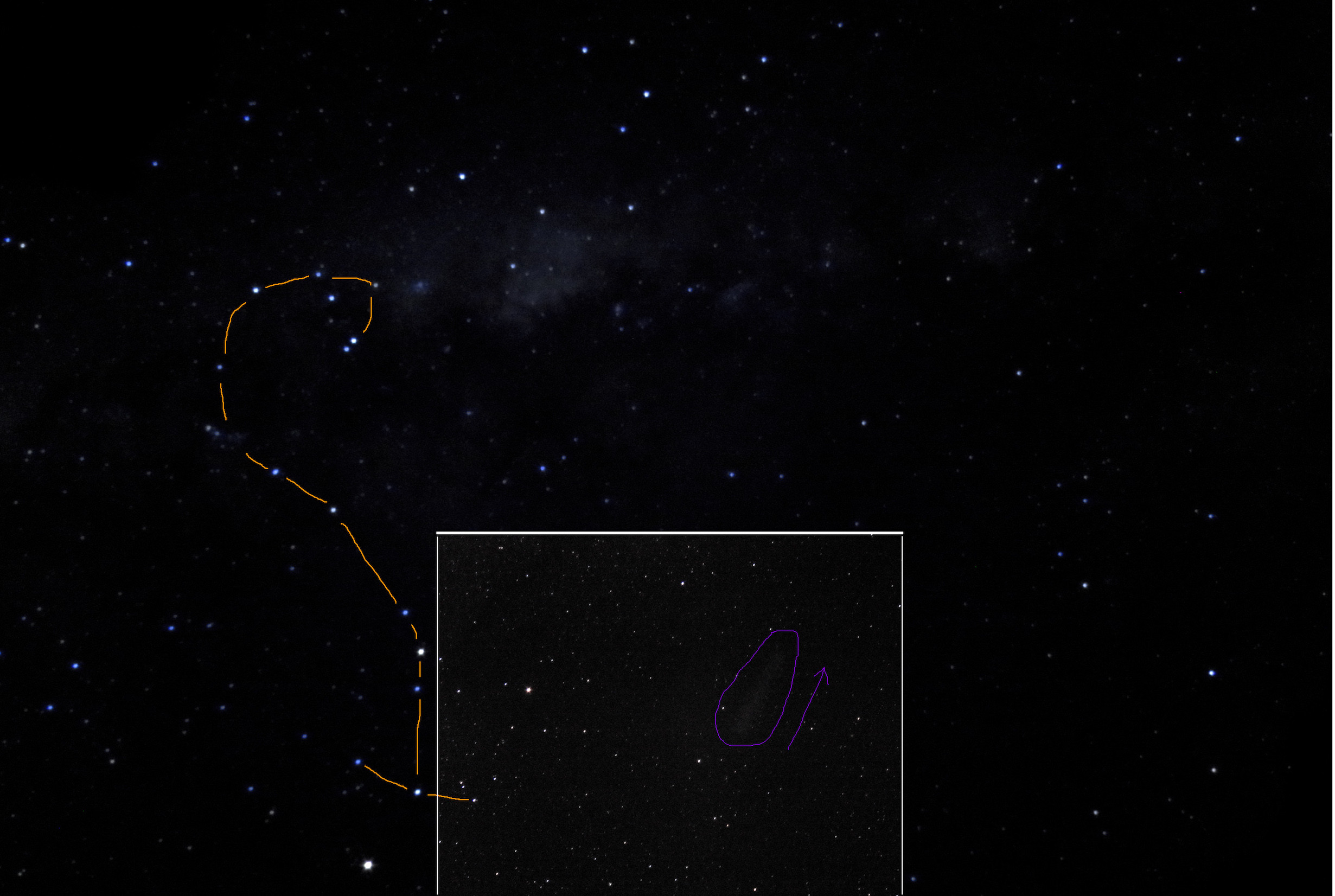 The most probable answer to date offered for the observed sky feature is the NROL-61 rocket launch. Specifically, a fuel dump from the Centaur stage of the multistage launch, as part of the Centaur's decent procedure back to Earth.

As this Satellite is intended for high geostationary orbit, multiple rocket stages are required.

This view comes from the fact this appears the only significant launch in the time period, within an hour or so, to the phenomena observed.

Other possible astronomical explanations such as comet, nebula, etc are eliminated by the shape, dynamic change, and drift relative to background stars over relatively short time periods of the phenomena observed.

Rocket launches from other nation states unpublished and unknown remain an alternate possibility.

The below quoted note on the NROL-61 launch from the satobs.org site refers to one part of this multi stage launch process to deliver the satellite to its destination orbit that seems of particular relevance as explanation. (My bold highlighting.)

Centaur de-orbit MECO 3 is the de-orbit burn of the Centaur. The orbit has been estimated based on an instantaneous change of elements. The MET of 01:05:00 is approximate. Blowdown of remaining propellants will occur shortly after MECO 3, which likely will take less than 15 minutes to complete.

More on the Centaur on Wikipedia: Centaur_(rocket_stage)

What a pleasure to observe casually a new and interesting night sky phenomena, and with the help of several be able to come to a plausible identification and explanation.

Not sure but it was probably the NROL-61 launch. A spy satellite for the US National Reconnaissance Office was launched at 1237 GMT July 28 from Cape Canaveral. I don't know its exact orbit so I can't say for certain whether or not it was what you saw but the spy satellite would have been performing a periphrasis raise maneuver in the vacinity of Australia sometime 45+ minutes after its launch at 2237 AEST which is consistent with your observations.

Not the answer you're looking for? Browse other questions tagged rockets observation plume or ask your own question.