How does a simple construction keep a firing rocket on the ground?

Today I have seen this report of a SpaceX Falcon 9 rocket test firing. The force of a burning rocket is tremendous, and in the video we see an apparently simple construction keeping the rocket (or rocket stage in this case) tied to the ground.

How does this construction manage to keep the rocket on the ground? What are its materials and design? Has this same (or similar) design always been used for such tests? 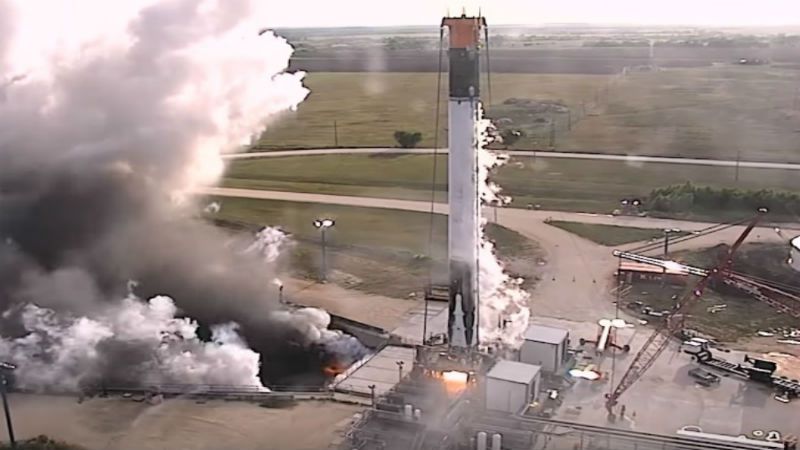 I can answer this part "Has this same (or similar) design always been used for such tests?"

In the early days of the program Shuttle would occasionally do a pad test where the main engines were fired briefly.

During this test (and at all other times) the Shuttle/External Tank/Solid Rocket Booster stack was held down to the Mobile Launcher by eight bolts. Four of these bolts connected the aft skirt of each Solid Rocket Booster to the Mobile Launcher. The bolts were 28 inches long and 3.5 inches in diameter. You can see the hold-down post which was the interface between the bolts and the Launcher in the picture below. 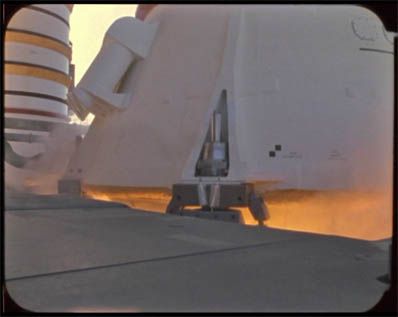 A schematic of the holddown post and bolt is shown here. 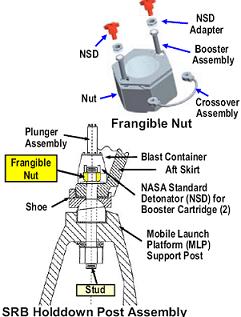 For a real launch, the nuts were blown in half by pyrotechnic devices (2 per nut, for redundancy). Here is a picture of the nuts after launch. 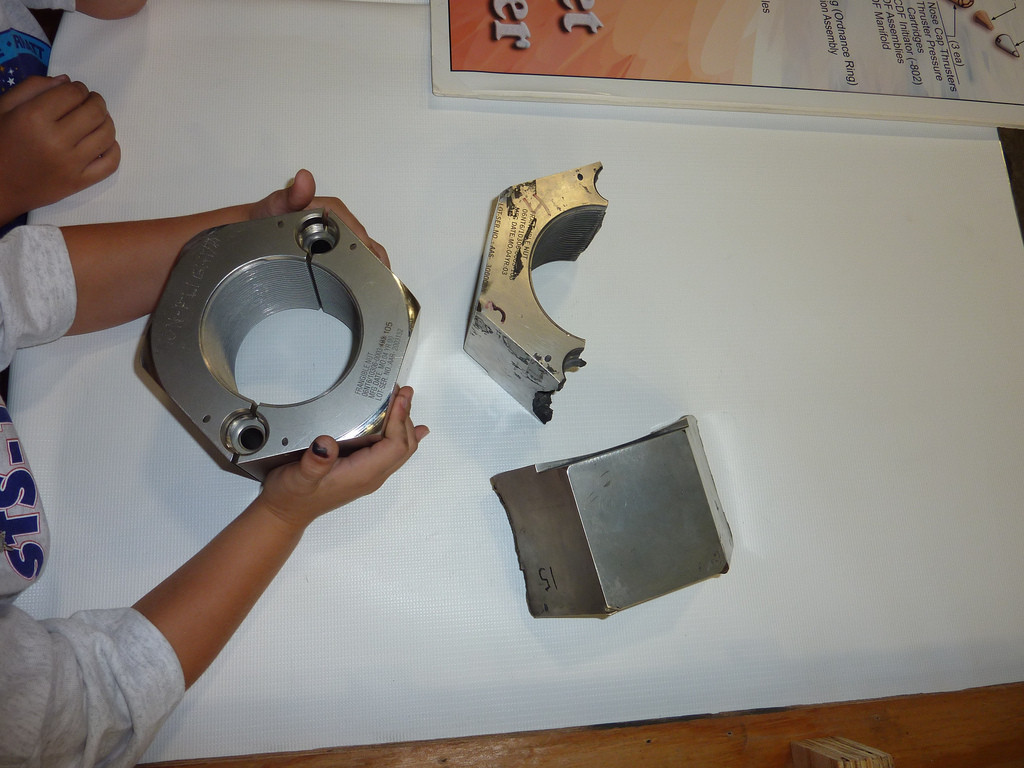 I am not sure you can accurately characterize this as "simple" but it was generally reliable. I am aware of a couple of problems that occurred throughout the years, the amusingly named "stud hang ups" and an incident on STS-112 where one set of redundant pyros didn't fire.

Then 4 steel wires of approximately 60mm diameter should be enough.

The special thing about a rocket is not its maximum force at zero speed but the fact that the force is generated in a way which is independent from the velocity difference to a medium in which the vehicle flies, and stays constant.

Source for the strength of the steel wire:

The orange top and strong cables seem to be a bit atypical. There is a video of F9-019 (Jason-3) on the same stand. 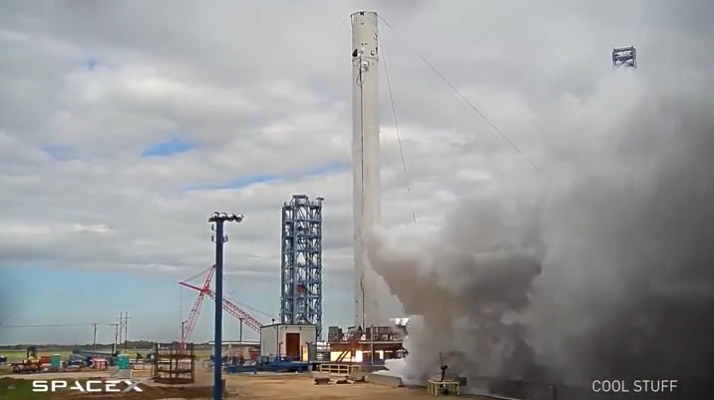 which shows thinner cables and no special cap. But it is a v1.1 of F9 so some differences may be because of that too.

The most important part of the hold-down mechanism are the clamps which keep the rocket fixed to the transporter/erector or a test stand. 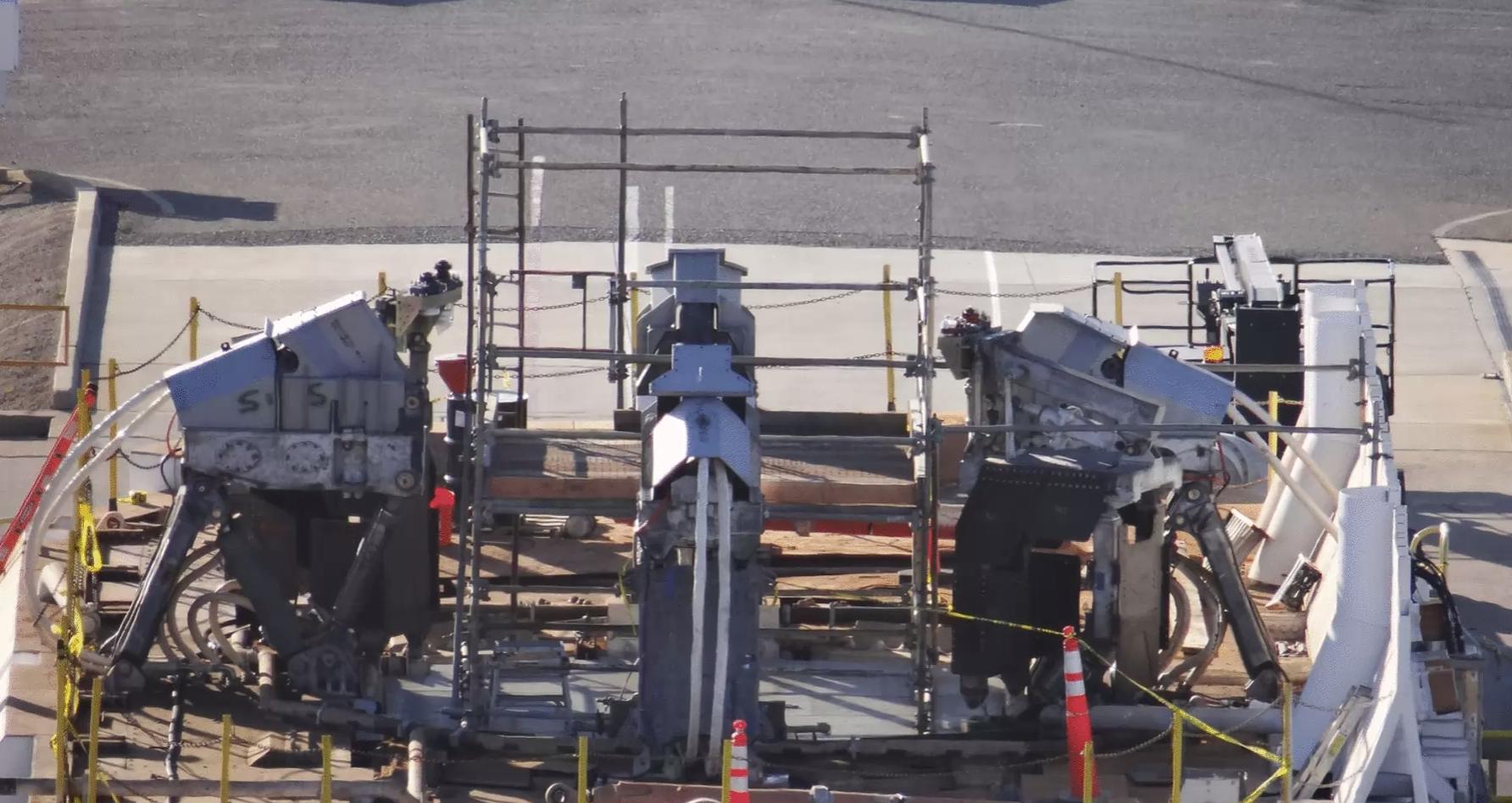 These attach directly to the octoweb structure just above the engine bells. There is a shot of the release in SpaceX webcast intro (you can see it for example at 7s into Thaicom 8 webcast from which I took this image) 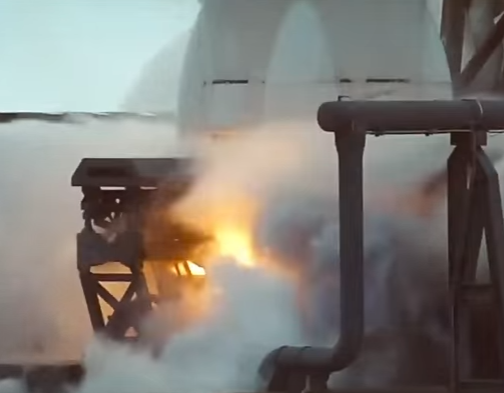 This seems to be the old F9 v1.0 if I am not mistaken. Later in the intro there is another detail of the release at 14s. Then in the same webcast there is a closeup on the current version at 21:20 but unfortunatelly without the actual release. 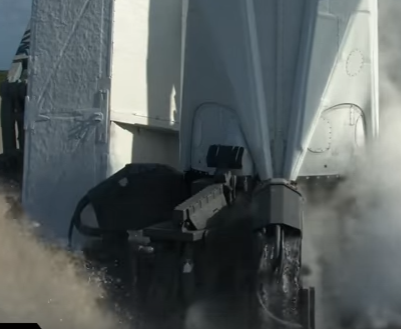 About the orange cap and thick wires - the speculations are that it is used to simulate the weight and some stressed (from vibrations etc.) of the second stage to check the structural integrity of the returned stage.

The launch mount used for actual SpaceX launches is capable of holding the full power of the stack for at least 1 second before every launch, and for the hot fire tests that are often several seconds long.

The SpaceX ones are in some ways simpler (no explosives) but in some ways more complex (they release on demand) than the Space Shuttle ones.

The stack in the image above is the new test pad at McGregor. They built it, we think to test a Falcon Heavy at full thrust, which is almost 5 million lbs of thrust.

They used a LOT of concrete, dug down deep into the ground, with lots and lots of dirt/weight on top of it, so that the rocket does not launch with the launch mount attached.

22
What is a launch vehicle resting on prior to launch?
10
What holds the Space Shuttle orbiter itself stable on the launch pad?
10
Rocket engine test bed structure
7
Which explode in spaceflight more often, nuts or bolts?
8
What are the benefits of using pyrotechnics on spacecraft?
6
Premature detonation of explosive bolts when landing on hot Venus?
5
Static Fire Tests: How is the rocket prevented from flying?

7
Why doesn't this SpaceX rocket test fire use water sprays?
19
Why is the F9-029 Amos 6 case more complex than the F9-020 CRS-7 explosion?
6
Why were three engines used for the F9 1st stage landing burn (BulgariaSat-1)?
13
Will the January 2018 government shutdown affect the Falcon Heavy launch?
20
Where does the thrust act in a rocket engine and how is it transferred to rocket structure?
29
Why no parachutes in the Orion AA2 abort test?
26
Why was the SpaceX abort test not initiated by real booster failure?
5
Longest static fire?