How will OSIRIS-REx scan and characterise the near-earth asteroid Bennu?

The 34 day launch window for the OSIRIS-REx probe will open in about five weeks (early September 2016), and it's approach to the near earth asteroid 101955 Bennu (provisional designation 1999 RQ36) is planned to start about two years later around August 2018. Currently the plan is to stay with the asteroid until the next return to earth opportunity. The plan is to start back in March 2021, and return to earth in September 2023.

In the year 2135 Bennu may pass through a "gravitational keyhole" - a small point in position (and velocity) in this case between the Earth and the Moon. At that point, the future trajectory is very sensitive to the exact orbit through the gravitational fields of the Earth and Moon.

One distinguishing feature of this mission is the planned collection of 60 to 2000 grams of material and return it to earth for study. One reason for this might be that Bennu currently has some possibility of eventually striking earth in another roughly 150 years, and a wide range of information about the object will be valuable.

Photographs and various other measurements will collect information about the surface. According to Wikipedia, detailed study of the surface will be required to understand its interaction with sunlight. Details of the shape, reflectivity and rotational dynamics are necessary to predict the impact of solar photon pressure and the Yarkovsky effect, both of which need to be calculated using a realistic model of the asteroid rather than using that of a sphere with uniform surface properties.

Here is a nice presentation and paper on Bennu's orbit and study.

What are the types of measurements will be done? With which technologies will OSIRIS-REx scan the surface of Bennu? What exactly is hoped to be learned about the shape and properties of the surface?

above: subset of frames from the very nice 4MB GIF in this NASA webpage.

side note: While the Pioneer anomaly (discussed also in this question and its answer) was proposed to be related to anisotropy in the radiation of thermal energy due to (mostly) internal heat sources, the excellent analysis here illustrates the important of detailed models of heating, thermal transport, and radiation from a complex body in order to more precisely predict radiative (and also reflective) photon recoil.

OSIRIS-REx is packed all full of good stuff. I'll throw together a quick list of the scanning ones you're interested in.

Also of note is that the entire spacecraft will be making that scanning motion shown in the gif, so as the asteroid rotates, all of these instruments will be able to have full coverage of it.

OVIRS is a point spectrometer, and will be used to create an organic and mineral map of the entire asteroid. It has a resolution of 20m from 5km away, which will allow for larger scale mapping, and also can shift down to 0.08-2m resolution to create a detailed up-close map of the eventual chosen sample return site.

OTES is a thermal spectrometer. It will have a similar function to OVIRS, and will also play a role in measuring the total thermal energy released by Bennu.

How REXIS works is well above my pay grade, but I think I'll chalk it up to "nuclear magic". Seriously though, on a broad level, solar wind and radiation interacts with the surface on the asteroid, and releases radiation that can be detected by REXIS. This released radiation contains signatures based on the material in the asteroid that released them. The signatures can be measured, and after processing on the ground, you have an elemental abundance map that can help supplement the spectrometers described above.

An 8in telescope that will be the first onboard object to see the asteroid. Once it is closer, it will be used to create high resolution images of the surface.

A middle/close range camera with 1m resolution, designed to search for asteroid plumes and satelites in the "Preliminary Survey" phase of the mission. It will also be used for high resolution imagery of the chosen sample site.

LIDAR scanning system to create a detailed topographic map of the surface. Funded by the Canadian Space Agency in exchange for a fraction of the returned sample, it is an improved version of a Canadian LIDAR system that has been used on the Phoenix Mars Lander and an Air Force Satellite. It will be used to create an overall topographic map early on in the mission, and then more detailed maps once potential sites are chosen. This system will give us the best topographic map of an asteroid we have ever had.

And just to give a better idea of where all of these instruments fit into the mission as a whole:

There are 4 major phases of surveying Bennu:

Edit: Today NASA released a profile of the OLA

For an unrelated purpose, I retrieved the Mission Requirements Document (OSIRIS-REx-RQMT-0001) for OSIRIS-REx. It details the minimum performance requirements for the mission. 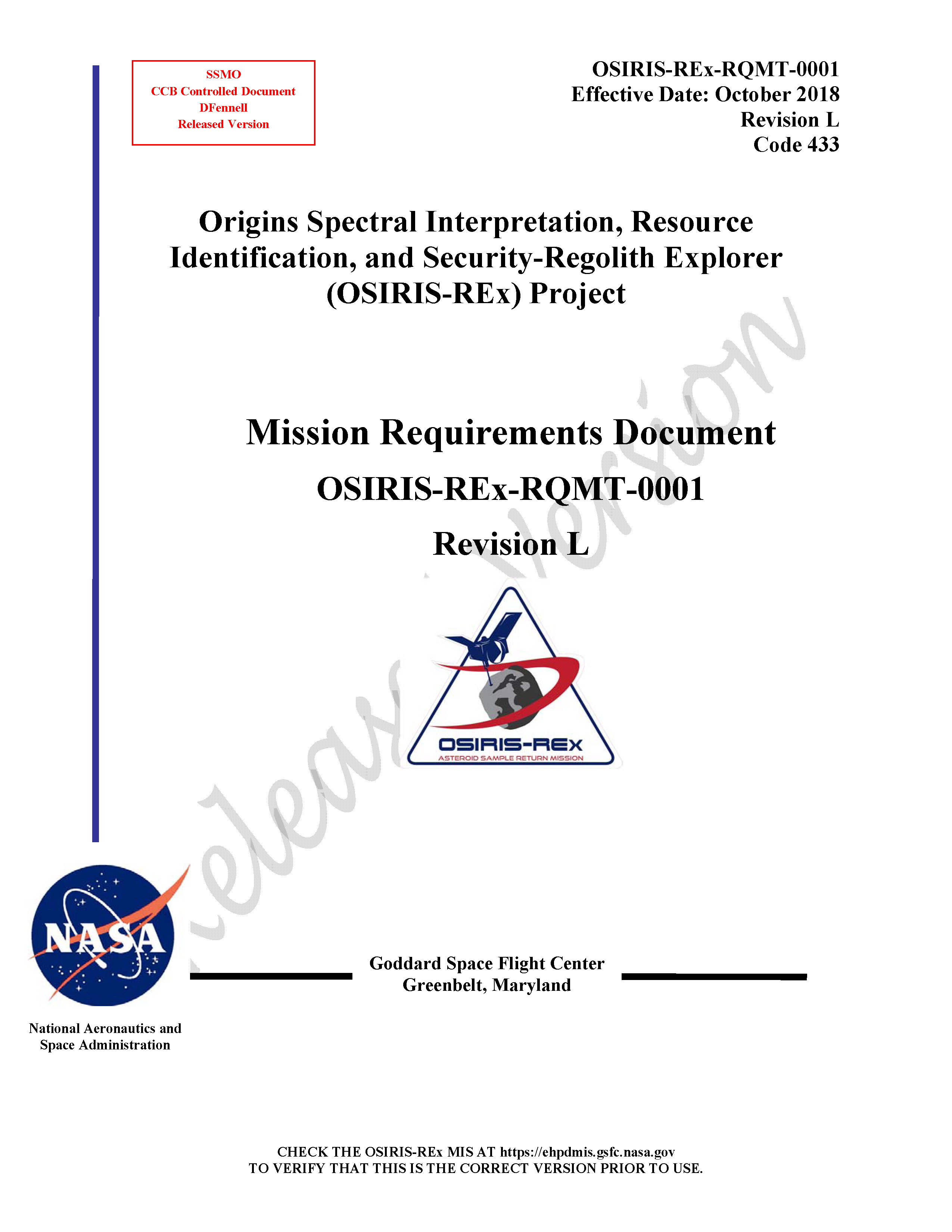 Not the answer you're looking for? Browse other questions tagged measurement scientific-data near-earth-object near-earth-asteroid osiris-rex or ask your own question.

12
Did New Horizons also demonstrate the “Pioneer Anomaly”?
4
How accurate can near earth asteroids be tracked?
2
Is there a method for finding the chemical composition of asteroids?
6
Did Rosetta improve on models of non-gravitational effects on comet 67P's orbit?
2
Are the estimated chances of Bennu hitting Earth in the next 200 years still about “1 in 1410” now that OSIRIS REx has scanned it?

9
How will Bennu's volatile compounds stay cool and unmodified by the heat of re-entry (OSIRIS-REx)?
8
Why was OSIRIS-REx almost destroyed because of a loss of pressure following the SpaceX “fast fire”?
2
Does Bennu pose a risk to Earth? And how can OSIRIS-REx's mission save us?
0
Is 2012 TC4 part of the Near-Earth Object Human Space Flight Accessible Targets Study?
2
How low does OSIRIS REx's record-setting orbiting around Bennu go?
0
How exactly will OSIRIS-REx's Navcam be used to navigate?
2
Could ejecta from asteroid Bennu enter into temporary orbit around it? If so, how?
2
Are the estimated chances of Bennu hitting Earth in the next 200 years still about “1 in 1410” now that OSIRIS REx has scanned it?
6
Could the uncertain mass of the OSIRIS-REx sample affect the trajectory of the return capsule?