Changing the rotational rate of a natural body

Let's say that for the purpose of terraforming, we need to speed up the rotation of a planet (like Venus), a moon or an asteroid to near Earthian day. How would we go about doing this? Can this be accomplished from within the body itself?

The key thing to doing this is to accelerate some of the mass of Venus outside of the planet, or alternatively bringing in some mass. Thus, there are 2 main things that could be done to alter the rotation speed. These ideas are explained in Wikipedia.

In addition, the wind speed of Venus is higher than the land speed, so putting up some large wind blockers would help to convert some of that energy into rotational energy of the planet. However, this would be a fairly minimal effect, as this is already being done in some scale, although not as quickly as is desired.

So, how else might this be accomplished? Xkcd has a nice comic showing one way, spinning around in circles can cause the motion of the planet to change. 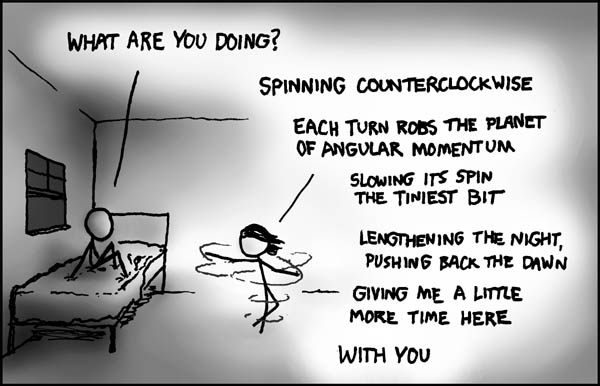 Not the answer you're looking for? Browse other questions tagged venus planet terraforming rotation or ask your own question.

6
Can a “free launch” from a space elevator really be free?

20
Would terraforming Venus destroy its ionosphere?
33
Could the Moon keep an atmosphere?
24
How does Venus' thick atmosphere survive against the solar wind?
2
Could a Uranus-style planet tidally lock?
7
Will thinning the atmosphere of Venus make its surface habitable?
6
How to calculate the speed of rotation of a given point on the Earth's WGS84 ellipsoid, about its axis?
1
Could asteroid 2012 XE$_1$$_3$$_3$ become a moon of Venus with the aid of rocket engines?
2
Is the retrograde (clockwise) rotation rate of Venus speeding up or slowing down?