Could an articulated permanent magnet work as a low-power cubesat magnetotorquer? Problems?

Conventional magnetotorquers for cubesats are electromagnets that produce torque in the Earth's magnetic field, and nearly all of the power they use just heats the copper through $\text{I}^2 \text{R}$ losses. A permanent magnet that was articulated with some kind of gimbal-like mechanism that could point it in a wide variety of orientations within the cube could in principle do this as well, using only a tiny fraction of the power.

There are a lot of design issues related to a magnetic design that would maximize the effect while keeping weight down. There might need to be a fail-safe parked position so that the satellite would not be "magnetically active" externally until it was fully deployed and operational - a little bit like those magnetic bases used in machine shops. A realistic design might require some finite torque in the articulation simply due to forces between the magnet and its "safe position" keeper or other ferro-magnetic materials that could be substantially larger than the torque related to the Earth's magnetic field.

below: an example of a Magnetic Base (rotated) from here. The permanent magnet (PM) magnetotorquer would not look like this nor be this heavy. It's just an example of the concept of a PM object with an "off"-like position. 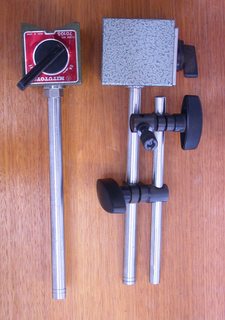 RAX and RAX-2 and possibly other cubesats launched by the University of Michigan (I can't remember at the moment) used fixed neodymium based magnets on their Z+ axis. Hysteresis was added to dump any residual momentum after P-Pod ejection. On the RAX missions, the magnets then were used to orient the satellite vertically over the poles where the science missions were conducted.

I haven't kept close tabs on the smallsat industry lately, but I would estimate that it is totally within the realm of doable, but with its risks. Cubesats are often built out of aluminum. While there may be other ferromagnetic materials used, and current loops in the electronics, I think a well chosen servomotor could over come most issues. The biggest risk in my mind would be dealing with vibration on launch. Moving parts tend to have higher risk.

Yes, there are rules about magnets (and just about everything else) on secondary payloads. The primary payload usually has many times more risk invested so they control almost everything about secondary payloads. The launch provider will have a say as well. It's almost always a case by case basis. The largest risk takers are probably any other secondary payloads on board. For example, M-Cubed (another Michigan launched sat) was believed to have stuck to another cubesat using passive magnetic control, rendering both missions a loss.

Disclaimer: I worked on the missions mentioned here, as well as a few others.

Not the answer you're looking for? Browse other questions tagged attitude cubesat magnetic-field magnetorquer or ask your own question.

23
Why doesn't the ISS orient itself to the Earth's magnetic field like a compass needle?
4
Docking cubesat in orbit - is it possible?
5
Can the electric field of the Earth's be used for satellite maneuvering?
3
Could you use magnets to orient in space?
3
Has one satellite's outgassing ever affected another satellite in the same fairing? Documented examples?
1
Are there any modern cubesats or smallsats that have relied only on magnetotorquers for attitude control?
1
How exactly did Cassini provide rock-solid attitude control to enable high resolution low light imaging? (1.2 arcsec/pixel for narrow angle camera)
1
What are the forces affecting superconducting MRI-magnet on low-earth orbit and could you accelerate a satellite with these forces?

9
Is the Paramagnetism of Liquid Oxygen Ever Considered in Engine or Tank Design?
2
Ways to measure dipole moment of magnetorquer
8
How well could the tether tension method of attitude control actually ultimately work for a cubesat system?
4
Effect of permanent magnet and solid core magnetorquer on magnetometer reading
0
Could a spacecraft be propelled by the deflection of a very high number of charged particles?
2
How will JAXA's space elevator-testing cubesat experiment work?
6
What are the most common practical design specifications for antenna in space?
4
Could artificial magnets orbiting the sun be used to accelerate spacecraft, like a magnetic "gravity" assist?
4
What are the Basics of CubeSat Power Supplies and Systems?