Liquids Plumbing on board

When a cargo mission is flown toward the ISS, there are at least four different kinds of liquids that may need to be moved into/out of the station:

How is this managed? Are the docking ports specially equipped for each sort of liquid? How is the liquid moved in the station (i.e. is there plumbing for wastewater)? What drives the liquids? Are there pumps on the station, the vehicle or both?

Finally: How is this system maintained in microgravity? While you can pump liquids, how do you drain the pipes in case you need to work on them?

With the exception of the propellant for Zvezda's thrusters, which is fairly simple and fairly short plumbing, you are asking about the Space Station's Environmental Control and Life Support Systems (ECLSS). The plumbing for propulsion is quite simple. This plumbing has existed since the dawn of spaceflight. The plumbing needed for life support is anything but simple. A simplified diagram follows: 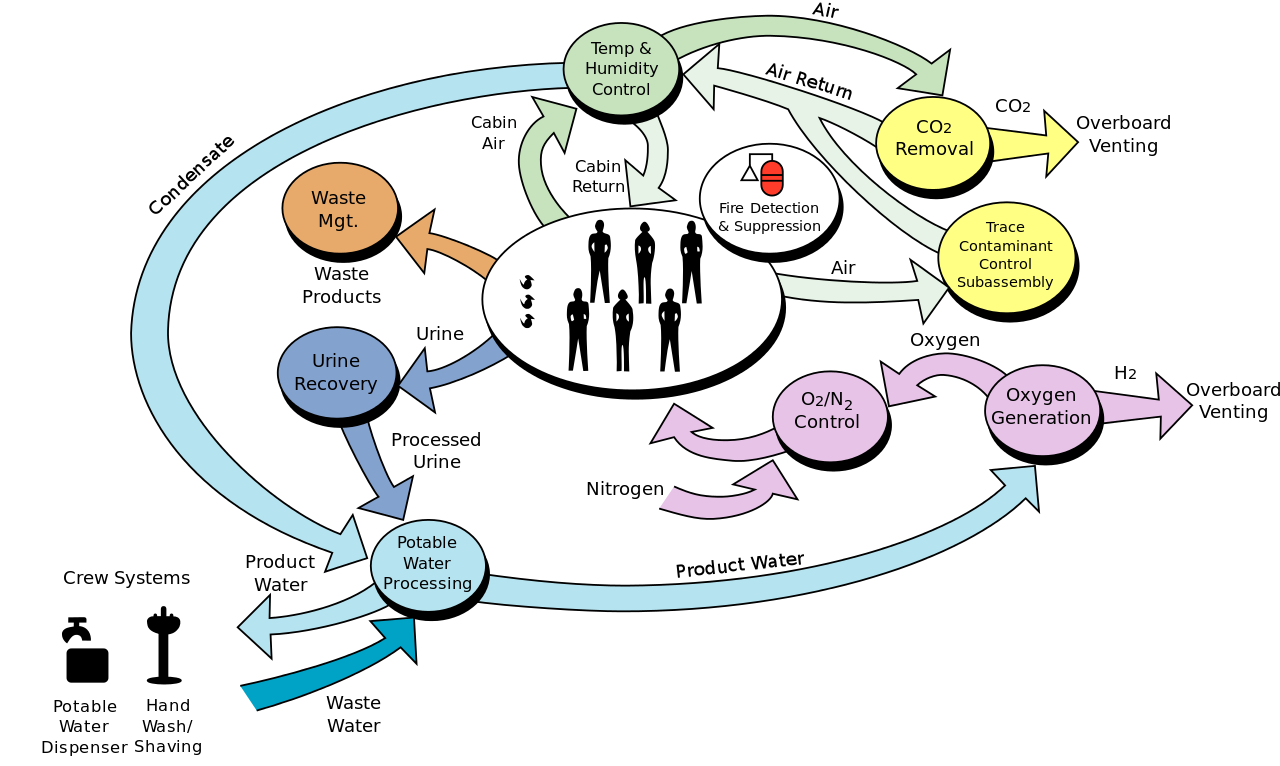 Source: NASA (so no copyright), via wikipedia.

Water from human waste in the Space Station toilets (both #1 and #2) is carefully scrubbed using specialized equipment. This waste water is then electrolyzed to form hydrogen and oxygen. The hydrogen is vented overboard as waste while the oxygen goes back into the breathing atmosphere. The desiccated products of human #1 and #2 waste are either sent overboard or placed in modules that will burn on reentry into the Earth's atmosphere.

This process of course leaks. Some of the good stuff (nitrogen and oxygen) is vented along with the carbon dioxide. Moreover, the vented carbon dioxide is mostly oxygen. Experiments have been tried that used equipment applicable to Mars that converts that carbon dioxide into methane (which was vented), but those experiments were just that, experiments. (Aside: That these experiments have not become operational and have instead been cancelled says something about the prospects sending humans to Mars.)

The Space Station is a leaky vessel. In addition to those expected leaks from hydrogen and carbon dioxide venting, the station leaks fluids with every docking and undocking, and it also leaks at every joint. This latter problem is is becoming more severe as the station ages. Because of this, the Space Station is regularly resupplied with water, nitrogen, and oxygen.

Not the answer you're looking for? Browse other questions tagged iss water liquid-fuel movement or ask your own question.

45
Why does the International Space Station produce so much methane?
46
Why vent $CO_2$ and $H_2$ waste products to space on ISS?
6
Supply of liquid oxygen (LOX) maintained on the ISS? Kept cold using “space”, or refrigerator?

10
Plumbing work of ISS?
13
Is water on-board space-craft (such as ISS) rationed?
3
What is the power required to move the space station?
15
Can Dragon, or Dragon V2 be used to boost the ISS orbit?
3
How would one go about plumbing in a large space outpost?
3
What liquids last the longest in space?
6
How will Robotic Refueling Mission-3's liquid methane tank remain full for six months without any boil off?
45
Can/should you swim in zero G?
8
Why does the Alpha Magnetic Spectrometer (AMS) on the ISS use carbon dioxide for coolant?