In this answer, it's mentioned that waste $CO_2$ and $H_2$ from the Environmental Control and Life Support Systems (ECLSS) are vented into space from ISS.

Are there no other uses for this material now or possibly in the future?

More generally, wouldn't it be in the best interest to keep any and all mass local to ISS (or another spacecraft) "just in case" it could be useful? Getting stuff there is expensive, and $H_2$ could be used for fuel I would think.

Added complexity is never welcome in a situation where lives are on the line and help isn't a phone call away. There have been a number of ammonia-related events and those are in systems that should theoretically be a lot more reliable and well characterized than a new CO2 or H2 storage system. If you polled ISS astronauts past and present - basically anyone who's had to think long and hard about the immediacy of technologies effect on life, I'd say the would be mostly thumbs down for keeping an "extra" poisonous gas and explosive gas around "just in case it might come in handy some day."

To keep a usefully large amount of hydrogen, you'd have to liquefy it. A hydrogen refrigerator may end up being somewhat complex and have moving parts and make vibrations. A cryogenic refrigerator is not unheard of in a spacecraft (infrared detectors often need to be cooled). LH2 has to be really really cold to store it without a high pressure (= dangerous and heavy) tank, around 20 K.

You do have 35-45 minutes of relatively good exposure to the cold of space on every orbit. All you'd have to do is invent a new kind of passive refrigerator technology that could take advantage of it using some kind of door that opens and closes, then insulate it from the rest of the station and for the almost 1.5 kilowatts of sunlight per square meter the other 45 minutes of each orbit, then fix it every time it breaks.

Keeping hydrogen around for a long time has issues with making various metals brittle and can lead to failures.

According to Hydrogen Safety, hydrogen can be explosive and concentrations of as little as 4% to as much as 75% in air are flammable. A tiny, low energy spark from a static discharge can ignite it - it's about ten times less energy required than for an explosive mixture of gasoline and air. Hydrogen flames are nearly invisible to humans (there is UV so there are hydrogen flame detectors based on that).

There are arguments against the storage of hydrogen for use as a propellant in answers to this question.

Hydrogen can diffuse through many materials and attack some of them as well. Elon Musk says it is "pernicious" (10:20 to 12:40 for the entire discussion on hydrogen powered cars).

Using LH2 for regular burns to maintain ISS altitude would require somehow adding a new set of engines to the ISS , or transferring the hydrogen (and LOX from somewhere) to a docked spacecraft which could be refueled.

Speaking of LOX - there isn't any on the ISS. In this answer it is explained that oxygen is brought to the ISS in very high pressure gaseous form, and stored as a high pressure gas. To develop significant thrust, it is usually necessary to deliver oxygen and hydrogen in liquid form to get enough mass per second into a small enough reaction volume. So a system to produce and store LOX would also be necessary.

CO2 is toxic, and even if it doesn't kill you right away, the coughing reflex it triggers can make it more difficult to handle a CO2 leak emergency (until you get a breathing apparatus). It can be stored at relatively low pressure and not so cold temperature if reduced to a solid (dry ice), as can be seen in the phase diagram below.

It's hard to imagine how it would come in handy, unless you are growing so many plants that they are depleting all of the CO2 produced by humans. However, if everyone leaves and there are robots taking care of the plants, a little extra CO2 might be helpful - depending on what the robots are doing with the plants after harvesting them.

It is an interesting - if academic - question; could waste CO2 be cooled by exposure to space to form dry ice, then be stored as potential propellant for a VASIMR or other ion engine for maintaining altitude. While it is a heavy molecule as a gas, it may be a nightmare in an ion engine. I think carbon would be the last thing you want inside a maintenance-free system with lots of high voltages, and it may be hard to ionize, and maintain ionization since you'd probably end up with both positive and negative ions desperately struggling to recombine with each other, and half of them would end up moving in wrong directions and cause further trouble.

These gases may not have any practical use, especially without new kinds of technologies and more mass. However, they pose several immediate and continuous risks to the safety of the crew. 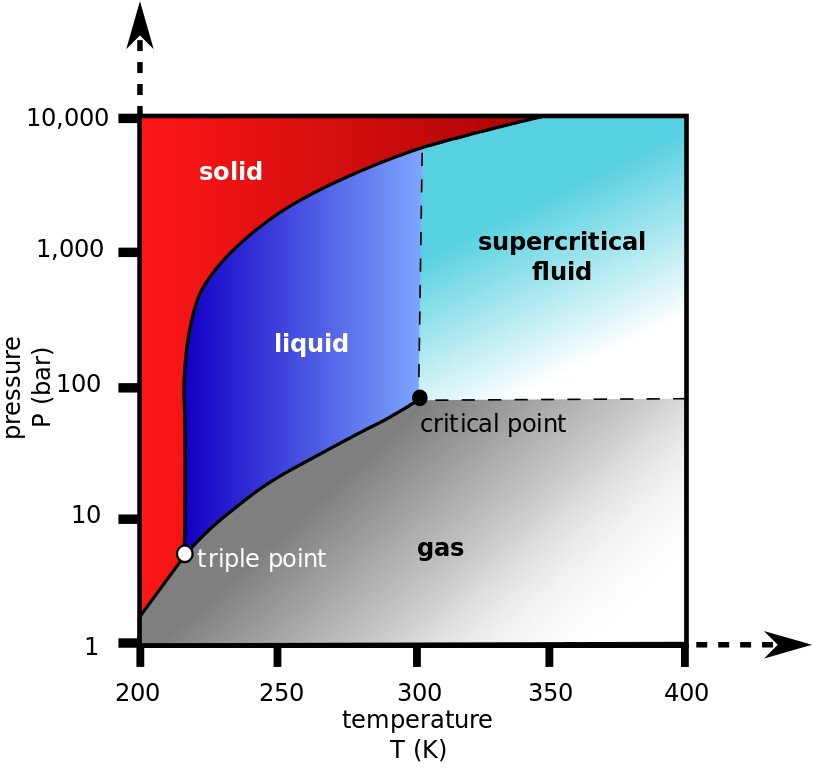 Above: Phase diagram of CO2 from here.

Not the answer you're looking for? Browse other questions tagged iss life-support mass waste or ask your own question.

13
Making propellants on Mars: Why not just LH2/LOX instead of methane?
4
Isn't electrolysis of water less efficient for a space craft than pressurized oxygen tanks?
11
Liquids Plumbing on board
6
Supply of liquid oxygen (LOX) maintained on the ISS? Kept cold using "space", or refrigerator?
4
H2 and CO2 ventilated outboard of the ISS, could become ice flakes in the extreme temperatures outside the ISS?
5
Where, physically speaking, are CO2, Hydrogen and Methane ventilated on the ISS
0
Water Compressed on Space Station
0
Have reliable, restartable LH2/LOX engines ever existed? - ever used?

12
What is the most sustainable method of recycling (human) solid waste on a manned space vessel?
10
What happens to waste on the ISS?
9
Could waste methane be recycled as propellant on the ISS?
5
How does methane waste produced by the ISS interact with our Atmosphere?
18
How close is the ISS to a closed system, in terms of carbon, hydrogen, and oxygen?
6
What is in ISS's waste product "brine", and how is it disposed?
8
Does ISS get a surplus of oxygen or water?
8
Why doesn't the ISS have more oxygen generators?
4
H2 and CO2 ventilated outboard of the ISS, could become ice flakes in the extreme temperatures outside the ISS?