What rocket launch protocols (if any) are in place to prevent premature or late intentional self-destruct?

In the control room, I imagine tension might be kind of high. I also imagine that folks are hoping for the best. So it seems like, in a high tension situation, if there were no guidelines, there is a possibility that the person with the self-destruct button might either press it too quickly in a knee-jerk reaction (e.g. in response to a minor but correctable problem), or the possibility that a person may wait too long (perhaps being unsure of their decision, or hoping that it is correctable, or perhaps it is a manned flight).

My question is: What's the typical criteria for initiating a self-destruct on a rocket launch? What guidelines are usually in place that a trained operator can fall back on in a high pressure environment?

For example, if the rocket starts to veer off course; is there a rule that says "wait X seconds after noticing a problem"? Things like that.

tl;dr The Range Safety Officer watches the vehicle trajectory to ensure that it stays within pre-determined trajectory limit lines. If the vehicle strays outside of those lines, the Officer sends the destruct signal (or signals the crew to tell them to shut off the engines, in the case of the Shuttle second stage). The inner lines are chosen so that if the vehicle is destroyed when they are crossed, the debris won't fall outside of the impact limit lines. Obviously these lines are different for every vehicle and mission.

In the case of the shuttle, they could be directed to destroy the vehicle by code word transmission from Mission Control (see Wayne Hale's blog post below).

a . Range Safety shall verify that all launch vehicles launched from or onto the Ranges have a positive, range-approved method of controlling errant vehicle flight to meet the objective of minimizing risks to the general public and foreign countries. NOTE: Normally, control systems on launch vehicles using the Ranges shall consist of an airborne Range Safety System that shall meet all the requirements of Chapters 2, 4, and 7 of this document. A thrust termination system may be considered as an alternative to a Range Safety System; however, quantification of risks must be determined, and the requirements in Chapter 2 shall be met. The alternative thrust termination concept and design shall be approved by the Range Commander.

c . Range Safety shall establish and control Hazardous Launch Areas and procedures to protect the public on land, on the sea, and in the air for each launch and launch vehicle using the Ranges and to ensure the following criteria are met:

2 . Flight paths and trajectories shall be designed so that normal impact dispersion areas do not encompass land.

The Impact Limit Lines are defined as

A little more on the lines from here 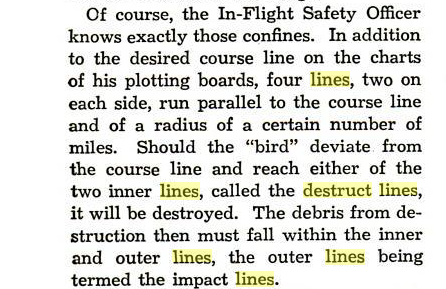 By long standing jointly signed Flight Rules, if the shuttle were to veer off course, spin out of control, or break up, my responsibility as Shuttle Ascent Flight Director was to transmit those Code Words on my loop. On hearing those words, the FCO would depress the two buttons in front of him to – as we say – ‘terminate the flight’. That means exactly what you think it means. I don’t have to spell it out.

This blog post also explains the role of the shuttle pilot and commander in a 2nd stage range safety scenario, as I mentioned above.

You see, the shuttle Commander and Pilot are designated Agents or Deputies of the Range. The destruct package is built into the Solid Rocket Boosters and those are jettisoned two minutes into an eight and a half minute powered flight. After that, should the shuttle go off course toward a populated area, the FCO can do nothing about it. The responsibility which the President of the United States has given to the FCO cannot be accomplished – except to call the crew and tell them to do what is necessary.

So we practice these scenarios – far fetched as they may be – to ensure that the crew knows what to do. Steer out to sea; shut down the main engines, protect the population along the eastern seaboard. One small problem – that procedure puts the shuttle crew into what is delicately labeled a “black zone”. If the shuttle is high enough – as it is for much of the boost phase – but with forward velocity significantly below orbital speed – then an unpowered entry will result in the g-loads and heating which builds up too fast, faster than the wings can generate lift. And the result? Well.

So the Commander and the Pilot are designated Deputies of the Range. If the really bad thing happens, they are sworn to protect the population of the east coast, even at the expense of their crews’ lives.

It takes courage to fly in space.

Not the answer you're looking for? Browse other questions tagged launch rockets failure range-safety or ask your own question.

20
How can a rocket's self-destruct make for a safer situation than being out-of-control?
18
Do the solid rocket boosters of the Shuttle and SLS have a self-destruct system and was it activated during the Challenger disaster?
15
How are self-destructs implemented in rocketry?
25
Do all launches include self-destruct mechanisms?

9
Are there any significant differences in launch failure rates between different agencies/countries?
6
Swarm: Is ESA launching another set of aerodynamically streamlined satellites into LEO without any self-destruct system onboard?
20
How can a rocket's self-destruct make for a safer situation than being out-of-control?
9
What are the consequences for a person who violates a launch exclusion zone?
0
Has “Auto-Destruct” shown any impact on launch tempo yet?
7
What are the falling parts in this ISRO rocket launch?
34
What holds SpaceX’s rocket in place in this launch?
10
What is the farthest distance a failed rocket has landed from its launch site?