Could cosmic rays be produced by alien propulsion systems?

Could the cosmic radiation of heavy ions which hit us be the exhaust of advanced electric propulsion used by alien space travelers? While supernovae seem to cause part of them, much of it is far from explained AFAIK. Our SEP probes spew out noble gas ions. Fission-fragment propulsion would spew out heavier ions at even higher speed. Almost any ion could be used for propulsion. Is there any physical argument against alien civilization origin of some of the cosmic radiation (ions from outside of the Solar System)?

More generally, what kind of SETI could be done today by studying cosmic rays, heavy ions rather than photons?

Plots like the one below really make cosmic rays look like a natural astrophysical phenomena. But there are error bars on the very exponential graphs like the one below. And the neat distribution function maybe just reflects what cosmic magnetic fields do to ions after a billion years regardless of origin. Does the spectrum of high energy ions represent cosmic alien market shares for different propulsion brands? 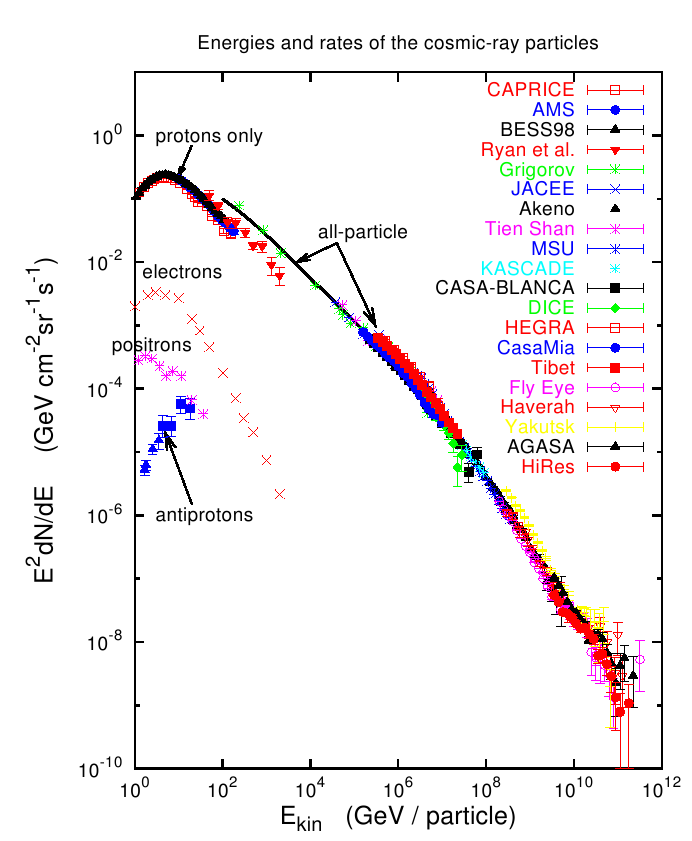 I can't give a precise answer to your primary question besides "Extremely unlikely", but here are some facts on cosmic rays that might help coming to a conclusive answer:

Current models are able to describe the distribution of energies and ion masses rather well. What we do not know precisely is the source of this radiation. There are plenty possible sources, but none of them is able to describe the full spectrum of cosmic rays. I would like to point you to a summary of our knowledge about cosmic rays at http://pdg.lbl.gov/2015/reviews/rpp2015-rev-cosmic-rays.pdf .

First of all, the total energy of cosmic rays in our neighborhood is huge. Don't forget that Earth is just a tiny "pale blue dot" in space and the fraction of cosmic rays actually hitting us (and our detectors) is vanishingly small. Secondly, the spatial distribution of cosmic rays is very homogeneous, with fluctuations on the level of 0.001 only. These two facts make it rather unlikely that cosmic rays are produced by technology of aliens. Required power sources must be extremely huge and we would expect more localized sources.

In fact, we do observe localized sources for extremely high energy rays only (because they need to come from sources near-by and can not travel too far). However, these high energies are rather unlikely to be used in an engine because they are hard to generate. For comparison: Todays ion thrusters can accelerate Xenon up to 1 keV, 6 orders of magnitude to the left of the diagram above. Using the best known particle acceleration technologies known today (about 100 MeV/m) these extremely high energy rays needed an accelerator with a length comparable to the radius of the solar system (70 AU). Lower energy emissions are much more likely to come from an extraterrestrial space ship, but are also much harder to detect because of the huge background.

You also commented about the large error bars near the right end of the plot. This is purely due to statistics, not due to some not understood factors. In this region we expect about 1 particle of this energy per square kilometer and year which makes them very hard to measure. For us it is rather fortunate that these events are rather seldom - they deliver the energy needed to lift an apple by ten meters concentrated in a single atomic nucleus!

The factor of E^2 is used in this plot is to give us convenient units. In many cases this plot is made with a factor of E^2.6, which makes the first part of the plot flat and more easy to see the various kinks and bends in the spectrum. Compare your plot to figure 28.8 in the PDF linked above.

These various changes in slope of the curve seem to be caused by solar and galactic magnetic fields which can trap particles to some extend within our galaxy while very high energy particles are reaching us directly from extragalactic sources. The steep drop-off at the end of the spectrum is not unexpected as well: Faster particles start to interact with the cosmic microwave background and are slowed down.

The PDF also shows relative numbers for various types of nuclei (figure and table 28.1). E.g. iron is about 1/4000 of the number of protons (hydrogen nuclei). As you can see, the shape of the curve is rather similar for all measured ions. The plot shows this distribution only for relatively low energies because it is hard to distinguish masses at very high energies - the mass of the heaviest nuclei is just 250 GeV, compared to a million GeV kinetic energy. There are also no numbers for really heavy ions beyond iron, because count rates are getting lower and lower and error bars are getting bigger.

Asdfex did an absolutely superlative job explaining why it's probably just background stellar emissions we're seeing, but let me ask you this: Who said a sun can't be an engine?

If you're willing to posit the existence of Megastructures (that we can't directly detect) then I offer you the Shkadov Thruster: 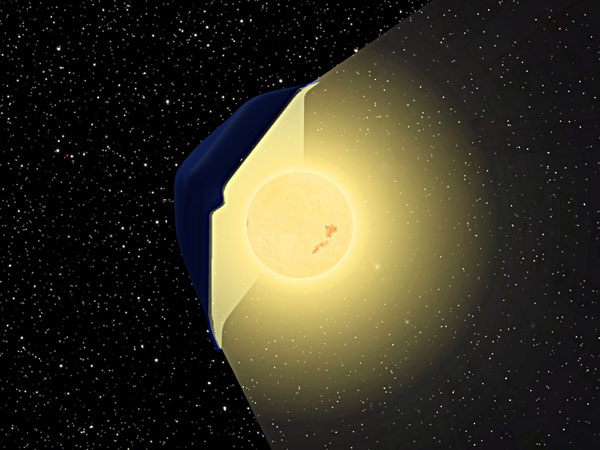 It's basically an immense photon-sail pushed by nearly half the output of a star. Its size allows it to gravity-tractor its powering star (and solar system) along with it, turning it into a literal starship.

Note: I don't think this is even remotely possible, I'm just giving you an edge-case where ion emissions can be the result of alien propulsion.

Not the answer you're looking for? Browse other questions tagged advanced-propulsion ion-thruster cosmic-radiation seti or ask your own question.

9
How do the effects of different cosmic rays compare?
9
How are nuclear thermal reactors designed for cosmic rays in space?
2
Could chemical energy quicken ion propulsion?
15
Is radiation dose from cosmic rays higher behind 50 cm of shielding, or lower?
4
Cost Estimation of Satellite propulsion systems
2
What is the most energy efficient & inexpensive propulsion system other than chemical fuel oxidizer that could be used in rockets?
5
Is it safe to consume food that's been exposed to cosmic rays?
2
What are the most effective deep-space propulsion systems?
5
When the magnetic poles of the Sun flip (once in 11 years), is the Earth hit by more galactic cosmic rays?