What is this 'engine plume interaction'?

SpaceX just released this high-speed footage, writing in the comments:

Matching the video fragments with that description, the fragment from 0:37-0:50 seems to be the engine plume interaction (the next fragment 0:50-0:55 would then be the re-entry burn): 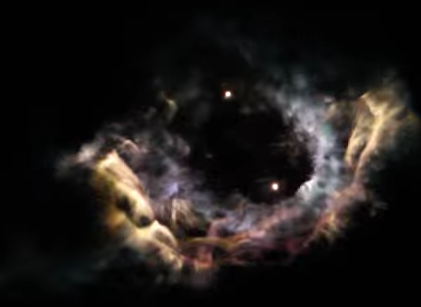 What is that, actually? What interacts? The two separating dots are obviously the upper and first stages, but what are the filaments/fumes?

The two dots are the upper stage boosting to orbit, and the first stage doing its first burn to slow down. (Boostback burn).

It is much clearer to see in this Instagram video.

The interaction is the first stage boosting through the plume of the second stage.

6
Do each of the fairing halves now use thrusters post-deployment? How does that work?
6
What is the burn time for the F9 boostback / reentry / landing burns?

20
Does the proximity of engines in engine clusters cause interference?
19
What are the differences between a standard Merlin engine and the Merlin Vacuum engine?
23
What makes the Merlin vacuum engine so deeply throttleable?
5
What is this additional plume on the Falcon 9, and is it being ignited/corrected for?
4
How is engine thrust monitored during flight?
12
Merlin engine stoichiometry
4
Which engine failed during CRS-1?
33
What holds SpaceX’s rocket in place in this launch?
3
The changes of a throttled Merlin-1d engine
2
What is the plume effect?