The speed of Apollo 11 at first stage separation was apparently only about 40% of what NASA claims? What does this indicate?

I measured the half angle of the shock-wave generated by the second stage of Apollo 11 after separation (see the picture). This angle is greater than 20 deg.

Using the relation that gives the velocity of an object as a function of the speed of sound and the half angle of the shock-wave, I got:

According to NASA, at burnout, the first stage had 6000 mph. 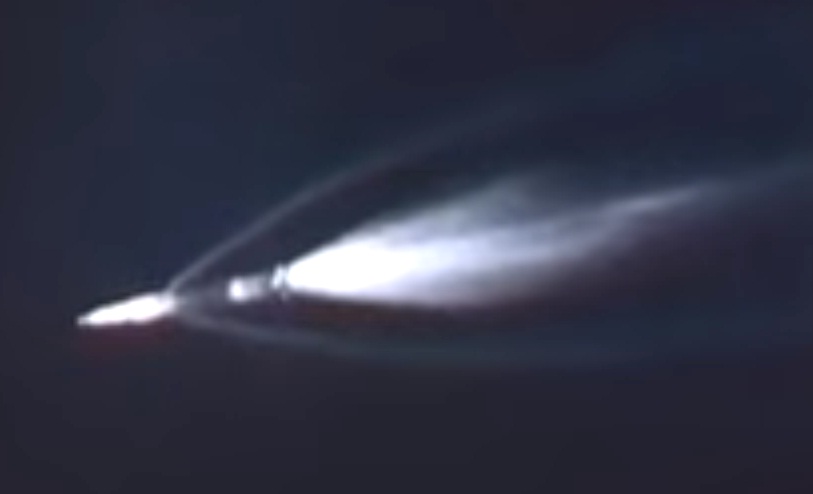 A more clear picture of the same event. 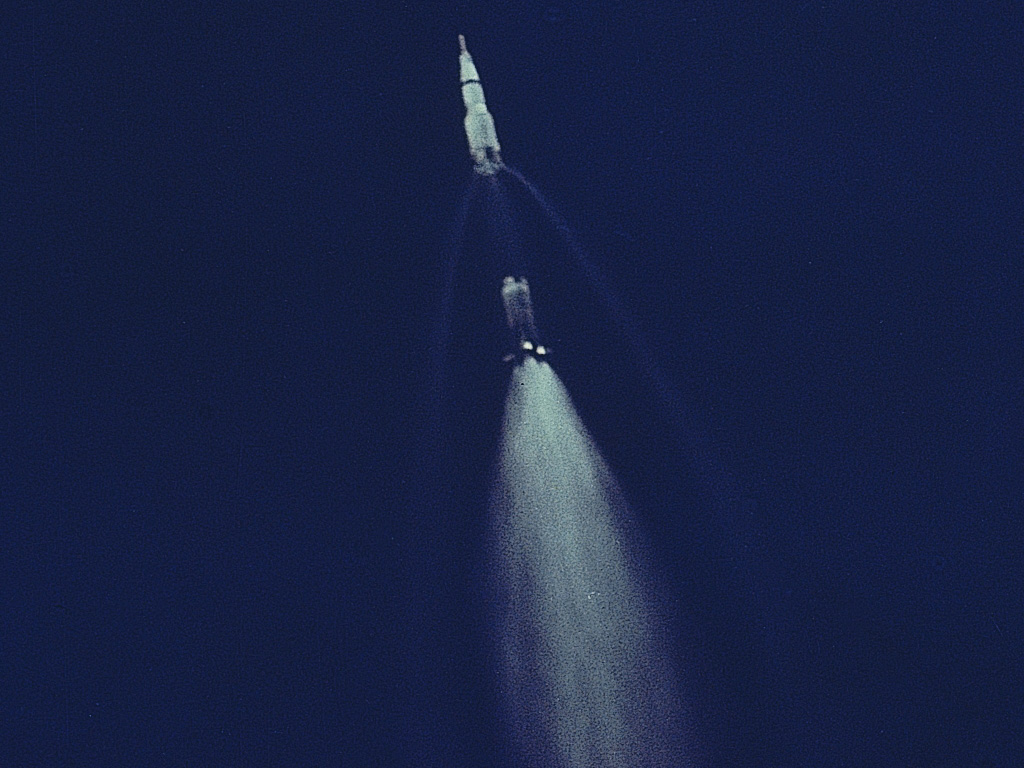 Another picture, from the same video, shows the shock-wave created by the leading edge of Saturn V. It is visible due to the cloud of gas formed around the entire rocket when the first stage retrorockets fired during separation. The same half angle, greater than 20 degree, appears. 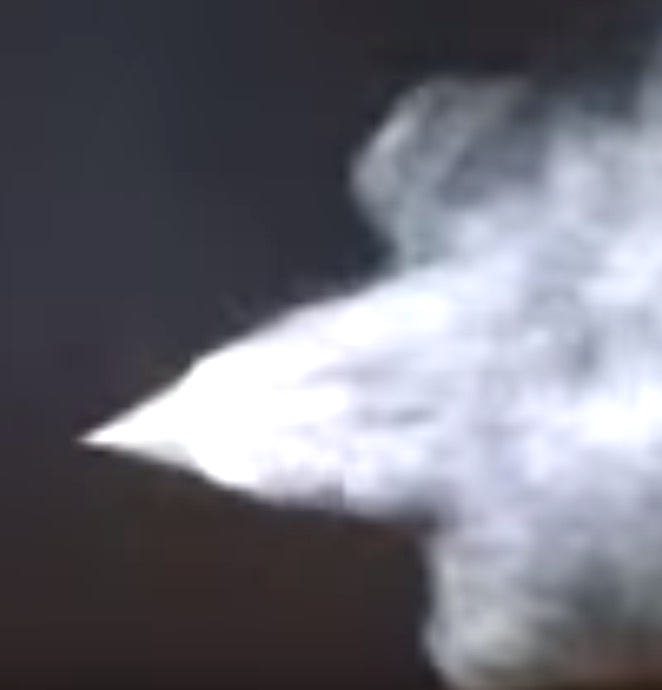 That is not a shockwave. It looks like the edge of the second stage engine exhaust plume.

If it were a shockwave, more shockwaves should be visible: one at each point where the diameter of the rocket changes, so escape tower, CM, both interstages.

Shockwaves are rarely visible. In the lower atmosphere you can sometimes see condensation in the low-pressure area aft of the shockwave (a vapor cone). You normally need a Schlieren camera to see the shockwave itself.

I've reviewed a number of launch videos. No shockwaves visible anywhere. The vapor cone is visible around Mach 1, not at higher speeds.

Stage separation occurred at 67 km, atmospheric pressure at that altitude is very low. I don't think there's enough air (or water in the air) to create a visible shockwave.

Update: Here are some images of actual shockwaves. This is a shadowgraph of a bullet. A shadowgraph is a way to photograph objects that makes shockwaves more visible. 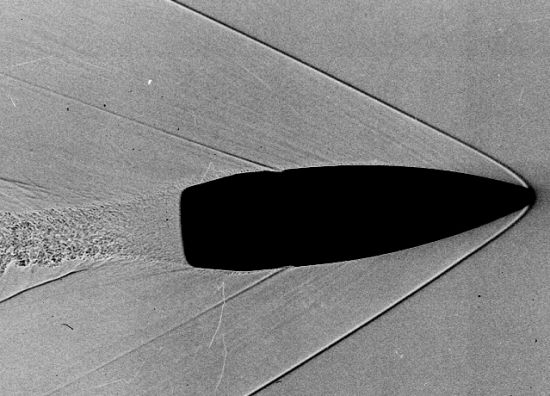 So we see a prominent shockwave at the tip of the bullet, plus smaller ones aft which are at a different angle. This means you can't reliably measure speed from the angle of the shockwave alone. You can also see the turbulent wake region aft of the bullet. This region has the lowest pressure, and will be the first to be filled with exhaust products. 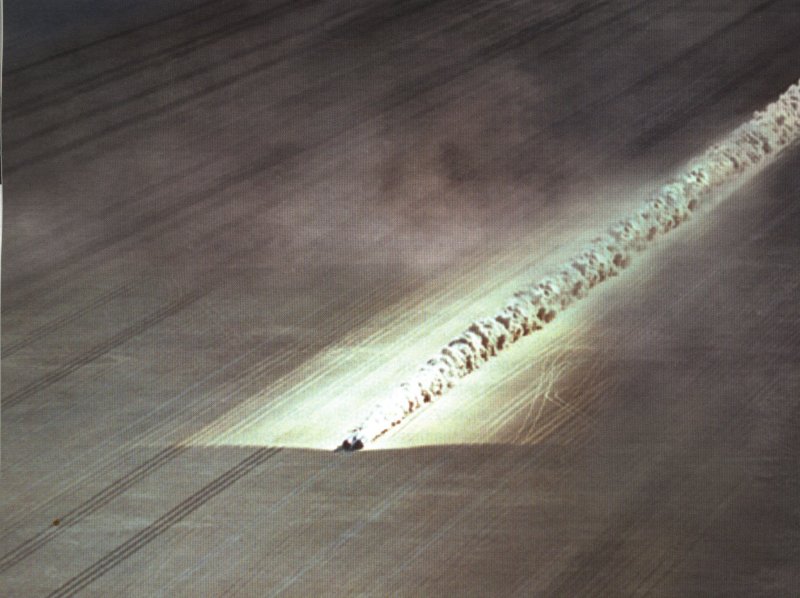 You can see the shockwave going almost perpendicular to the vehicle, and the exhaust products (mixed with dust) that stay in a much narrower cone. More precisely you don't see the shockwave itself, but the dust that gets picked up off the desert floor by the shockwave.

As a final sanity check: if the Saturn V were moving at 1/3 its design speed at first stage separation, the mission would have failed because the CSM wouldn't have reached orbit. We know that didn't happen.

The main issue is that the image of the rocket is not taken from the side, but at an angle. We can determine the angle by looking at the apparent length to width ratio of the two stages - note that this screenshot has been taken directly after separation. The first stage seems to be twice as long as wide, the second stage is about three times longer than wide. Comparison with the actual size show a diameter of 10 m and a length of 40 m and 60 m respectively.

That means, all lengths seem to be shortened by a factor of 2. In particular, this makes the angle of the Mach cone seem to be twice as big as it actually is. After restoring the correct aspect ratio, I measure 18 degrees, corresponding to a Mach speed of 6.5, or 2200 m/s.

Given the poor quality of the image the number is reasonably similar to the expected 2700 m/s. As Hobbes pointed out, we can not be sure that it actually is a Mach cone, but is rather close to the expected one. I'm also in favor for the explanation as the outer edge of the second stage engine plume.

At stage separation, the second-stage engine has begun its burn and an optimally-designed diverging cone of the nozzle will underexpand the jet of gas in the early part of the burn, causing wall separation within the nozzle where the shock wave forms. Consequently, the shock wave will be within the jet plume, and is usually visible as shock diamonds in the exhaust, the number of diamonds corresponding to the Mach number of the jet exhaust speed.

Not the answer you're looking for? Browse other questions tagged apollo-11 shockwave or ask your own question.