I was watching SpaceX's launch of the Japanese satellite JCSAT-16 yesterday, and the second stage at a point seemed to decrease in altitude (from 171km to 165km) at about T+00:07:00 in this video. Is that normal or was that a glitch?

This is actually pretty common in rocket launch profile design. For the Ariane rocket, we covered it in What is the reason for the Ariane 5 launcher with Intelsat 29e losing altitude?, but the same principal applies in general. When you have a low thrust high ISP upper stage, it is common for it to thrust more horizontally at a certain point than vertically, which might cause the altitude to go down somewhat. The speed eventually will be such that the altitude begins to rise, as the curvature of the Earth drops off more.

There doesn't seem to be any glitch as far as I can tell.

I watched the video. The altitude is expressed in integer kilometers. We don't know for sure if it's rounded or truncated, but a good guess would be truncated, so that 171000 and 171999.99 would both show up as 171 km, 'odometer style'.

Every time I see the altitude change, I hit the spacebar (1/5 second reflexes after coffee, on a good day) and type the T+ time, the altitude, and the speed.

Why speed? for two reasons1

Here's the result. I don't see a glitch. There is gap in the altitude plot because the 171 never "rolls over" to 172, so we have no information about the altitude except that it's somewhere between 171 and 172. Remember, the data points represent when the odometer rolls over - the only time when we can even guess at the fractional part. 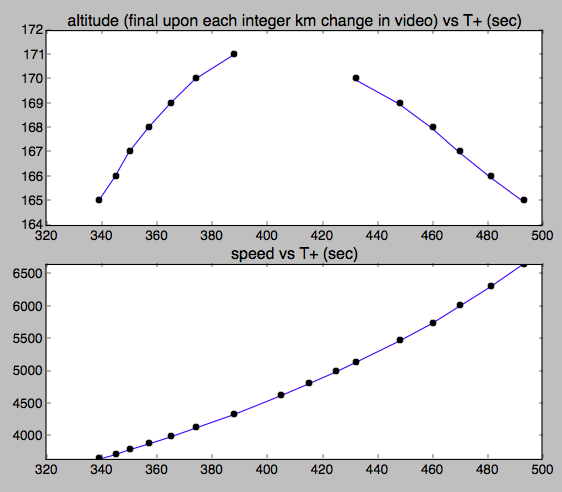 above: Plot of the data I took from the video, using the Python script below.

Discussion: For a circular low earth orbit (LEO), or any orbit actually, you can get the orbit velocity $v_{orbit}$ at a distance $r$, as long as you know the semi-major axis $a$, the gravitational constant $G$ times the mass of the body you are orbiting, in this case $M_e$ for the Earth by using the vis-viva equation:

At 28 degrees latitude, the earth is spinning at about 410 m/s, so assuming we're in a 28 degree inclination plane and still nearby the launch site, the ground speed will be about 7192 m/s.

You can see in the plot that throughout this part of the video, the 2nd stage is well below orbital speed, and thus is sub-orbital. However it's picking up substantial speed and getting much closer. Still you see a rising and falling arc that you might expect of something suborbital, and the decrease in the rate of fall is consistent with that - thus the asymmetric shape. 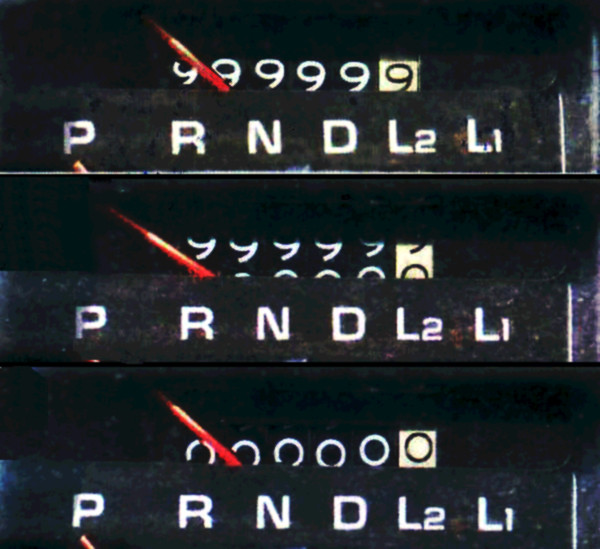 above: Odometer rollover from here.

Not the answer you're looking for? Browse other questions tagged launch spacex falcon-9 upper-stage telemetry or ask your own question.

12
What is the reason for the Ariane 5 launcher with Intelsat 29e losing altitude?

18
Where is the other half (stage two) of the SpaceX Falcon 9 rocket?
9
Why rotate the Falcon 9 2nd stage after deployment?
3
When this F9 2nd stage engine suddenly moves upon shutdown, is it moving along the rocket's axis?
3
SpaceX stage 1 reentry control?
16
What is this jet of material spraying out from Stage 2 during the SpaceX PAZ mission?
51
Why would NOAA restrict the ability of SpaceX to live stream the second stage?
10
Deploying multiple satellites from one second stage
8
Why did this fairing separation happen at such a high altitude? (SpaceX Iridium-6/GRACE-FO)
9
SpaceX Falcon-9 fairing heating during launch?
6
What are the challenges in recovering Falcon 9's second stage this way?