What were the circumstances of this impact event on Jupiter in 2012?

I recently came across this video of an impact on Jupiter in 2012:

Curious about its origin, I did some research and found that the video was taken at 11:35 UTC on September 10th, 2012, by amateur astronomer George Hall. Now that the video had a bit more credence, I became curious as to the circumstances of the event. The linked article claims the following:

Currently, the theory is that a 10-metre asteroid hit Jupiter early Monday morning, just below a region known as the Northern Equatorial Belt.

This article was written in September, 2012. Has anyone else looked into this since that time? Were any other instruments able to record or document this event? I would like some additional details on what exactly happened, if there are any to be had.

To start off, here's an excerpt from Wikipedia on this September 2012 Jupiter impact event:

On 10 September 2012 at 11:35 UT amateur astronomer Dan Petersen visually detected a fireball on Jupiter that lasted 1 or 2 seconds using a Meade 12″ LX200. George Hall had been recording Jupiter with a webcam on his 12" Meade; upon hearing the news Hall checked the video to see if the impact was captured. Hall had indeed captured a 4-second clip of the impact and released the video to the public. The impact's estimated position in the system was longitude = 345 and latitude = +2. Dr Michael H. Wong estimated that the fireball was created by a meteoroid less than 10 meters in diameter. Several collisions of this size may happen on Jupiter on a yearly basis. The 2012 impact was the 6th impact observed on Jupiter, and the fourth impact seen on Jupiter between 2009 and 2012. It was quite similar to the flash observed on 20 August 2010.

In a report posted on the Cloudy Nights forum, Peterson said it wasn't clear if the impact would leave a scar on Jupiter much like those seen in 1994, when the comet Shoemaker-Levy 9 broke into pieces and peppered the planet with debris, creating visible impact marks in Jovian cloud tops. It is also not yet known if the object to strike Jupiter was a small asteroid or comet. Peterson wrote:

"My best guess is that it was a small undetected comet that is now history, hopefully it will sign its name on Jupiter's cloud tops."

But, according to Franck Marchis' Cosmic Diary blog post on the 2012 Jupiter impact event, several images were taken before and after the flash by amateurs astronomers around the world, but none were able to detect any debris field visible at the impact site: 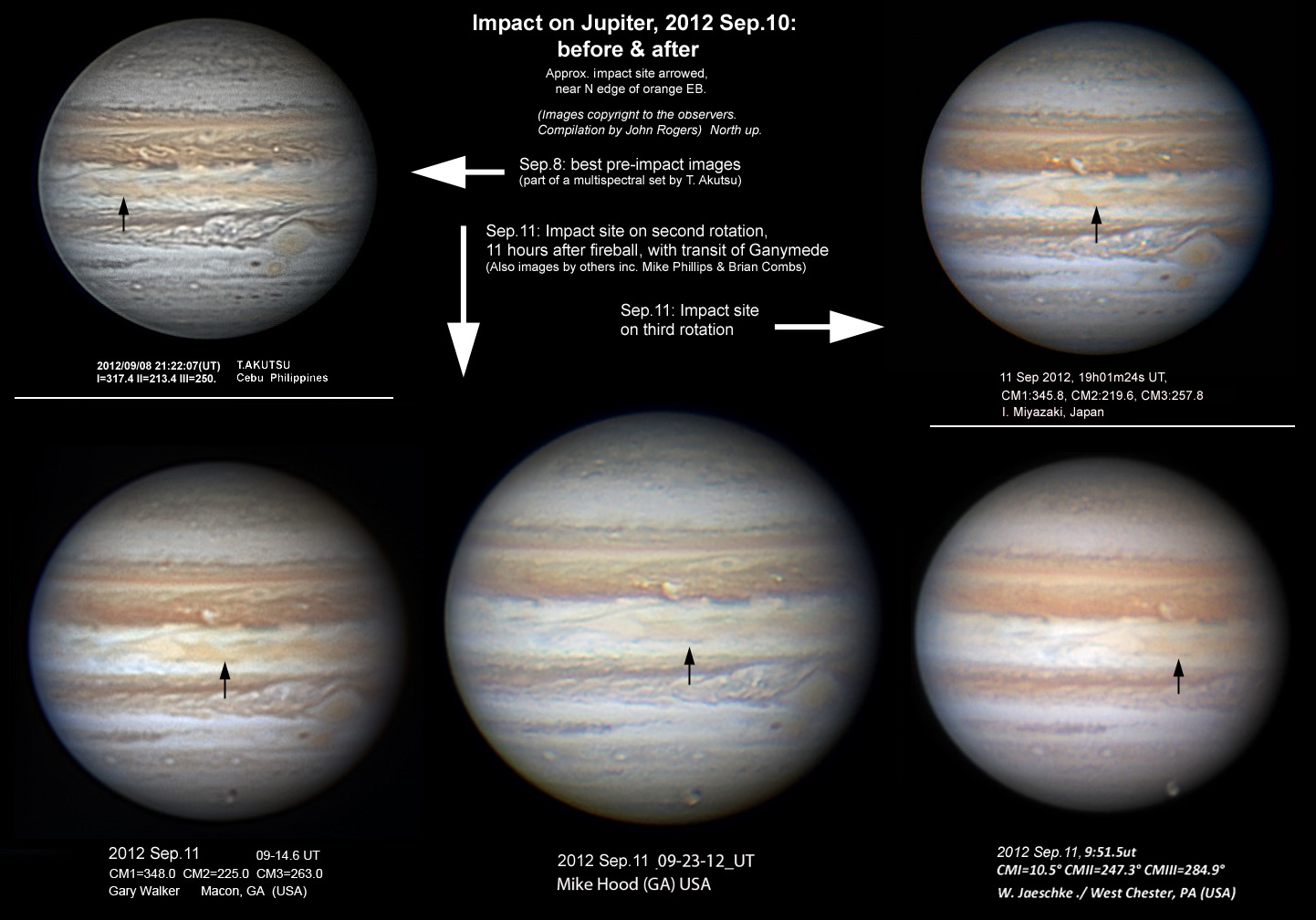 Observations of Jupiter collected before and after the event by amateur astronomers. The arrow indicates the position of the flash.
No debris field can be seen. Click the image for a higher resolution. (credit: J.H. Rogers, British Astronomical Association)

Despite the large uncertainty on the generated light curve he [Mike Wong] predicted “that this event is too small to create a visible impact scar“. The total amount of energy that was derived for this impact is very close to the June 2010 event one which was analyzed and discussed by R. Hueso and his colleagues in arXiv:1009.1824.

At the present, since no debris field has been detected and the total energy seems to be low, we can conclude that the flash was most likely a meteor due to a small (diameter <10m assuming a density of 2 g/cc) meteoroid. Even if the event may be 500 times less energetic than recent estimates of the Tunguska event, it is remarkable that an amateur astronomer equipped with a 12″ telescope and a webcam could record it at 730 million of km.

I've included in the quote a link to the Wikipedia page on 2010 Jupiter impact event that also lists a few other detected Jupiter impacts, but as you might be aware, there were so far 6 impacts observed on Jupiter, among which probably the most famous impact of the comet Shoemaker–Levy 9, in July 1994.

I wasn't able to find any reference that any of the observatories around Jupiter, like maybe the Cassini-Huygens detected this impact from 2012.

Not the answer you're looking for? Browse other questions tagged jupiter impact or ask your own question.

22
What is the probability of impact?
6
What is the intensity of radio noise around Jupiter and Saturn?
12
What would happen if an Earth-sized body encountered Jupiter?
6
What would happen if an object larger than Jupiter hit Jupiter?
8
What impact would a pea size meteor have when it hits the ground?
1
How to understand this NASA animation of Juno's passes near Jupiter?
16
Would the one million people on Mars be killed by an impact equivalent to an Extinction Level Event on Earth
33
Why does this image of Jupiter look so strange?
12
What are these features on this moon of Jupiter?