China launched the Quantum Experiments at Space Scale (QUESS) on the satellite called MOZI or Micius today, which will be used for quantum communications between China and Europe. Popular Science describes the science package as such:

It is not clear to me what this means. Maybe I don't understand the lingo, or maybe they are dumbing it down for the public. How is the entangled signal relayed by this satellite from China to Europe? Are the "quantum key communicator", "entanglement emitter", and "laser communicator" really separate devices?

I should really get back to finishing the other answer. In the mean time here is some recent (today's) news. I've skimmed the Science journal article now and added a summary here. Will improve it further tomorrow.

today's news: The current news is about a demonstration of producing entangled pairs in space and successfully receiving each member of the pair at a separate ground station. This is an important step, but this is not the same as, or close to relaying information from one ground station to another. So far they have confirmed that the photon pairs received at two ground stations are entangled.

below: "Fig. 4. Measurement of the received entangled photons after transmission by the two-downlink channel. (A) Normalized two-photon coincidence counts in the measurement setting of the jHi=jVi basis. (B) Normalized counts in the diagonal jTi basis. Numbers in parentheses represent the raw coincidence counts of different measurement settings" From Figure 4 in Yin et al. 2017, Science.

In other words, there were polarizers at each receiving station changing polarization states independently using different sequences at each site. When they happened to be in combinations where the entangled photons would both pass, the count rate was much higher than when they had combinations that would not pass photons entangled in this particular way. In this case the polarizers at the ground stations were (likely synchronized) Pockels cells running different pseudo-random polarization sequences at 4 MHz. 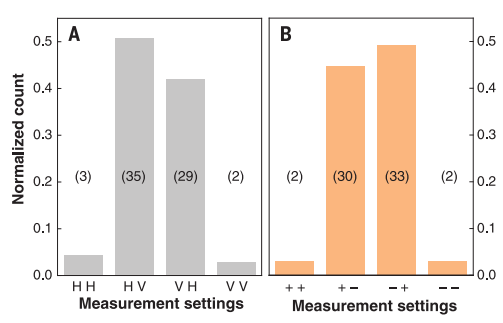 In the future, they will try to use this to send an encryption key from one ground station to the other ground station. They would then use the key to transmit data in a conventional way over any high speed link. They could use the internet, dedicated fiber, or even use QUESS in a simpler photorepeater mode for a very small message. You'd use a different satellite with bigger telescopes for high bandwidth, this would be purely a demo. Of course you' really just use fiber on the ground or "the normal internet" once you have successfully sent your key with entangled photons.

How? Use the think that Einstein didn't like; "Spooky Action at a Distance". One ground station (the sender) manipulates it's received photons from space in one of various ways, causing the entangled photon received at the other ground station to suddenly attain the complementary state. In many Quantum Key Distribution (QKD) demonstration, the entangled pair generator and one receiving station are located physically much closer together and the only long link is between the pair generator and the other receiving station. Other demonstrations however will use similarly long paths for both photons in the pair.

I found the Q&A format in the LA Times particularly transparent and helpful. The video by Science is really worth watching. 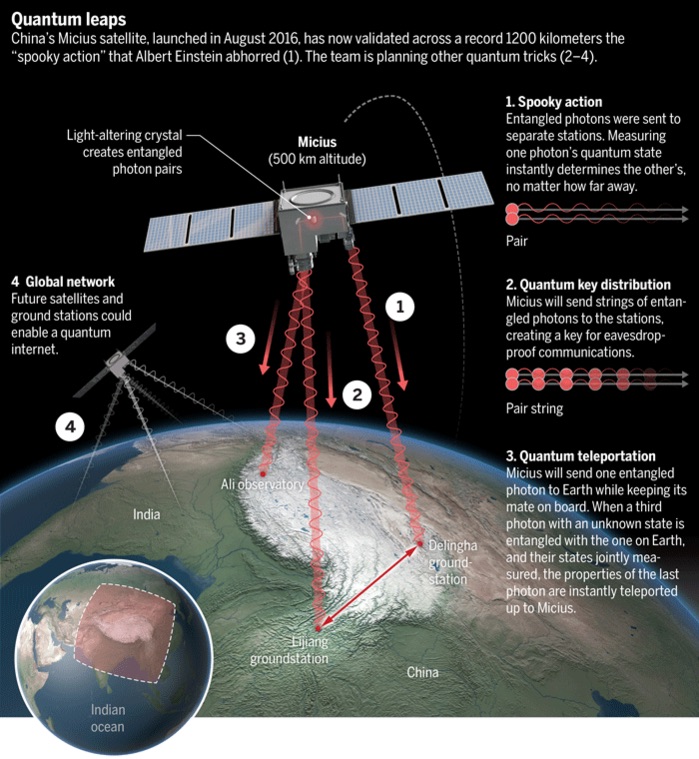 QUESS converts single photons of UV (visible) light from a 405nm photodiode laser (PL in the figure) into pairs of 810nm photons using a parametrically poled KPT crystal (PPKPT in the figure). Similar KPT crystal material is also used in older style green laser pointers to convert pairs of 1064nm photons into single 532nm green photons. QUESS then uses its two telescope systems. They are not identical but one is schematically represented here. One of the two beams of entangled 810nm photons enters from the bottom. It is combined with "helper beams" of 850nm and 532nm (described below) There is also a camera sampling return signals from the Earth station at 671 nm through the same telescope (top left) and directly (bottom). During operation one of these systems is pointed to each of two independent ground stations, and each one tracks the motion of the ground station through several levels of feedback.

below: "Fig. 1. Schematic of the spaceborne entangled-photon source and its in-orbit performance. (A) The thickness of the KTiOPO4 (PPKTP) crystal is 15 mm. A pair of off-axis concave mirrors focus the pump laser (PL) in the center of the PPKTP crystal. At the output of the Sagnac interferometer, two dichromatic mirrors (DMs) and long-pass filters are used to separate the signal photons from the pump laser. Two additional electrically driven piezo steering mirrors (PIs), remotely controllable on the ground, are used for fine adjustment of the beam-pointing for an optimal collection efficiency into the single-mode fibers. QWP, quarter-wave plate; HWP, half-wave plate; PBS, polarizing beam splitter." From Figure 1A in Yin et al. 2017, Science. 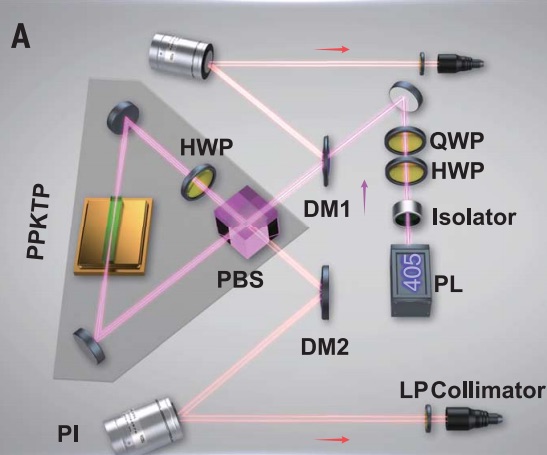 below: "Fig. 2. The transmitters, receivers, and APT performance. (A) The entangled-photon beam (810 nm) is combined and co-aligned with a pulsed infrared laser (850 nm) for synchronization and a green laser (532 nm) for tracking by three DMs and sent out from an 8× telescope. For polarization compensation, two motorized QWPs and a HWP are remotely controlled. A fast steering mirror (FSM) and a two-axis turntable are used for closed-loop fine and coarse tracking, based on the 671-nm beacon laser images captured by cameras 1 and 2. BE, beam expander." From Figure 2A in Yin et al. 2017, Science. 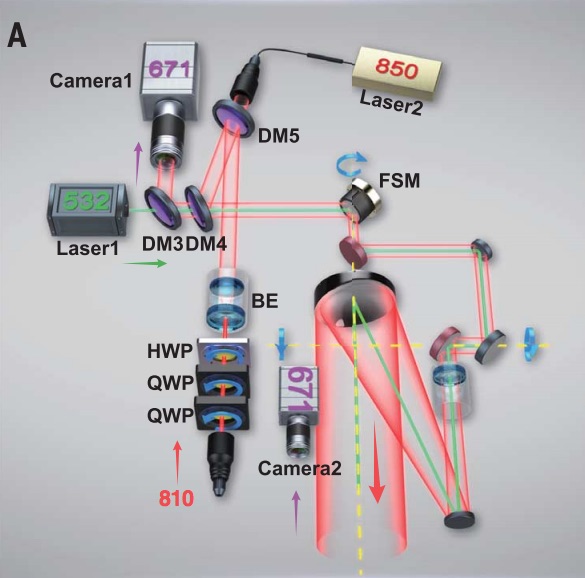 3
Quantum technology for starship communications and landing on Mars
14
How to best think of the State Transition Matrix, and how to use it to find periodic Halo orbits?
2
How would you calculate the maximum bandwidth possible in space?
2
What is the current status of space laser communication (lasercom) in Russia and China?

9
Do satellite uplink/downlink signals spread or leak into space?
14
How does the US's 2008 debris cloud compare to India's 2019 and China's 2007 contributions?
8
Do the latest Starlink satellites use inter-satellite laser communications?
2
Could you theoretically launch your own satellite and transmit satellite phone signals to it?
0
How much did the cheapest communications satellite cost?
3
Quantum technology for starship communications and landing on Mars
10
What CPU does China's Zhurong rover use?
1
How does Quantum change it's antenna's shape? (Flagship UK telecommunications satellite just launched)