Can you take a bath on Mars?

A common picture of someone floating on the Dead Sea or Great Salt Lake, shows how high you float. 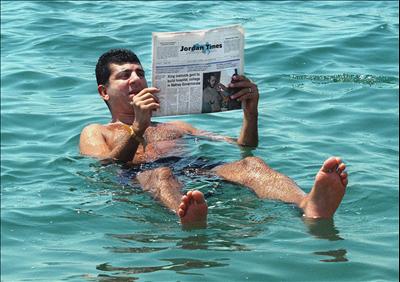 If you had that water in a bath tub, I don't think you would sink to the bottom, you would just awkwardly float in the tub. Bathing in small tub where your body does not rest on the bottom would be impractical/impossible. Imagine bobbing around in the tub trying to wash without tipping over and banging your head against the side of the tub.

With the gravity on Mars being much less than Earth, would you float in the bath water?

Short answer, No different from Earth in floating.

Buoyancy in water or any fluid is based on the weight of water displaced. Floating is based on the weight of the item displacing water. This is ultimately ends up in comparing densities. If the density of the displacing object is greater than the density of the fluid it will weigh more and sink, if it's density is less it will weigh less than the water displaced and float. On Earth people float higher on very salty water because the water is denser than fresh water, so less fluid must be displaced to support the weight of the person.

In a lower gravity field like on mars, your body and the water would both weigh less by the same amount (local gravity), but your densities would compare the same way, so floating or sinking would be unchanged.

Not the answer you're looking for? Browse other questions tagged mars gravity water hygiene or ask your own question.

17
How would swimming on Mars feel, given the lower gravity?
12
Boiling ponds and pools on Mars?
11
Is there a better way for astronauts to bathe?

8
Can Indian PSLV take ISRO to Mars?
4
Can you store exposed ice in the Earth's orbit?
12
Boiling ponds and pools on Mars?
7
How does Orion take its bath (Hydro Impact Basin)?
3
Liquid water on Mars
4
What are the technologies that can identify, validate, and quantify water-rich locations on Mars?
47
Can/should you swim in zero G?
6
How do you mine water on Mars?
4
Horseshoe lakes on Mars?