Propulsion technology for cubesats and nanosatellites is in active development, but there are at least a few based on sound principles that are likely to be tested in the next few years. There are also a few time-tested thruster technologies used on hundreds of satellites now that could in principle be engineered to put in a cubesat.

Question: What would be the best way to design a (say) 3U cubesat, deployed from the ISS or similar altitude LEO vehicle, so that at least a 1U section of it could attain a heliocentric orbit with the highest possible aphelion (no longer bound to the Earth/Moon system) using current or near-future cubesat-comaptable propulsion technology?

If it's helpful for example, it could be assembled already in the microgravity environment of the ISS, and gently deployed from there, in order to save on structural mass that would have been needed to survive launch from earth. Parts could be 3D printed there as well. Budget for COTS-type items is large, and "the shelf" is a few years in the future to allow for things that are not quite ready yet but probably will be.

A clever use of the moon's gravity is of course both allowed and encouraged. I just ran across this answer, which links to this NASA page: http://stereo.gsfc.nasa.gov/orbit.shtml. The first video is a nice illustration of how handy the moon can be.

Here is a GIF made from the frames of that .mov file:

The 'at least 1U' part should have some minimal power system so it can measure something to verify its aphelion distance, a starcam snapshot of a few planet positions, or just a measurement of the 1/r^2 drop in solar intensity, or something different.

If spin-stabilization helps, assume that the method of deployment can set the attitude (aim it) and spin it if needed.

If you assemble it on the ISS, it should be considered safe to assemble on the ISS. Otherwise you'll have to launch from Earth the old fashioned way.

If we take the "near future" route, there are a couple of light-sail projects that, in principle, have almost unlimited potential asymptotic aphelion: 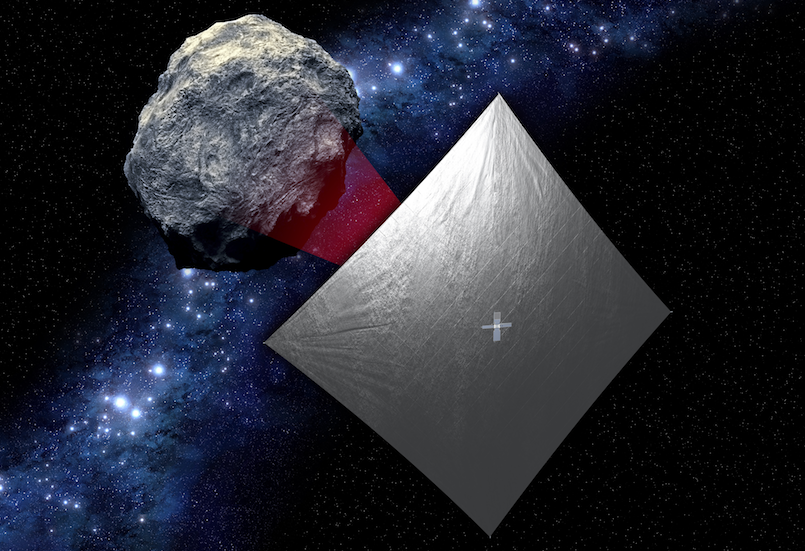 None of those have flown yet, and none of those missions meet the exact "deployed from the ISS or similar altitude LEO vehicle, so that at least a 1U section of it could attain a heliocentric orbit with the highest possible aphelion" standard. But, pending success, they do indicate that there may be a technology that could (slowly) put a 3U vehicle on it's way.

Not the answer you're looking for? Browse other questions tagged propulsion engines cubesat ion-thruster or ask your own question.

10
Could Earth-lunar flybys be repeated consecutively without the use of propellant?
0
Neural networks applied to micro satellites missions

20
Is there any ongoing research in nuclear pulse propulsion?
22
Has any CubeSat flown with an active propulsion system?
11
Are cubesats deployed with fully discharged batteries? Even those on Sherpa?
3
Are 1U cubesats sufficiently detectable to get at least minimally usefully predictive public TLEs, updated regularly?
0
What are the absolute maximum dimensions of a proper 6U cubesat? Does ASTERIA comply?
5
Will the Neumann drive start testing aboard the ISS some time in 2018?
2
Are the cubesats deployed from the ISS always directed “nadir and retrograde”?
3
What are the prospects for comms with cubesats using “normal” internet connections?
2
Which Cubesat Cameras Actually Worked in Orbit before 2019?