Which are the space station projects for a Mars mission using the current propulsion technology capabilities?

Which are space station projects for a Mars mission using the current propulsion technology capabilities? Many space station concepts are designed by artists before for missions beyond Earth. But these concepts have capabilities and use propulsion systems which aren't designed or tested yet. In the next decades new technology will be developed, but until these days which are the projects or designs using the current propulsion systems?

JPL wrote up "A Minimal Architecture for Human Journeys to Mars" last year, which plots out a likely path given the current technology and budget situation.

The architecture is a Phobos-first roadmap that has a 2.5 year round-trip to Phobos launching in 2033, with a 300-day stay at Phobos. After the Phobos trip, there would be a short-surface-stay mission to Mars, described as similar to Apollo 17, in 2039. This still doesn't sound quite like what you're asking about, since you're asking about a station.

For that, you have to look at the final mission in the architecture, the long-surface-stay Mars mission. The mission would be for a crew of four, and would start around 2040. Like the Phobos mission, there would be about 300 days on the surface starting in 2043. The mission would require 10 SLS launches. Here is an image depicting the stages: 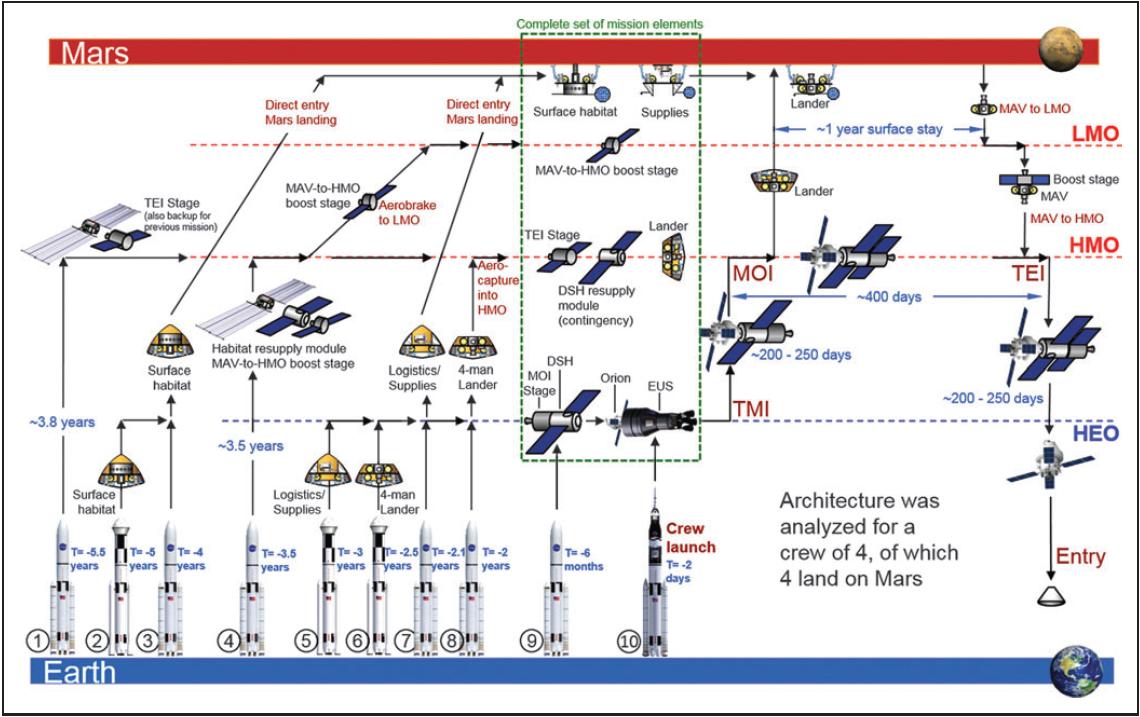 Each lander would be delivered in a manner almost identical to the crewed lander, with the exception that they could use direct entry and avoid aerocapture as an intermediate step. The crewed segments of the mission would be identical to the previous short-surface-stay mission, except that the full crew would go to the surface. This launch campaign would be implemented with a steady cadence of one SLS launch every 6 months. The exception is that once every 2 years, two SLS launches would need to occur within one month of each other. Additional ground infrastructure at the Kennedy Space Center would be required to support those biennial extra launches, and that capability would be needed by about 2040.

Aside from the SLS and the Orion, which are still in development, the mission would also need at least four additional vehicle types that are either planned or still under study: the planned Solar Electric Propulsion (SEP) tug; and the Deep Space Habitat (DSH), In-Space Chemical Propulsion stage, and Mars Lander/Mars Ascent Vehicle (MAV) which are still under study. These are listed for the short duration mission, but are also present on the long duration mission. They do not go into the specifics of the needs for the long duration mission.

The paper also details plans to progress toward a permanent outpost. It says "using this example architecture, a new crew of four could be sent to Mars every 4 years along with two cargo landers." These missions would continue to extend the base on Mars.

In addition to consumables, the cargo landers could bring exploration equipment such as pressurized rovers, advanced surface power systems, science equipment, drilling equipment, in situ resource utilization (ISRU) packages, and additional habitation volume. As the Mars base expands, some crew would stay for the minimum cycle time of about 350 days, but others could possibly stay for a much longer time and wait for the next Earth return opportunity. In this way, the base could eventually be permanently occupied and evolve toward increasing self-sufficiency.

Taking into account the readiness level of the described technologies, they estimate that this concept should be affordable given the sunset of the ISS in 2028.

Annual budget constraints need to be considered as a design requirement for human journey to Mars architectures since it is likely that the NASA budget will not see a dramatic increase beyond adjustments for inflation. This in turn requires a phased approach toward establishing a permanent outpost on Mars to allow the technical risk and the required funding to be spread out and still deliver significant and publicly engaging milestones along the way. One such approach is presented here as an example. It is a minimal architecture that relies on assets already under development or planned by NASA. A series of missions in cislunar space would lead to a Phobos lander in 2033 to be followed in short order by a dress rehearsal landing on the Moon, and then by a crew to the surface of the red planet by 2039. We hope that the ideas and principles introduced here in whole or in part can be a useful input to the process of structuring an implementable human journey to Mars in our lifetime.

It is important to emphasize that at this stage, this is just one example architecture, though the paper notes that other studies have used portions of this as a basis.

Not the answer you're looking for? Browse other questions tagged mars propulsion space-station or ask your own question.

7
Have the micronewton thrusters developed for the LISA mission been flight tested yet?
3
Do we have the technology to make large rotating airlocks?
18
Are there any promising next-generation space station cooling technologies?
8
Are there any Mars missions currently in the design phase which could take advantage of NASA's Low Density Supersonic Decelerator?
7
With current or near-future Cubesat propulsion technology, largest aphelion achievable?
12
Is the concept of the Epstein Drive based on actual theorized scientific research which is considered plausable?
34
What led NASA et al. to decide the ISS should be a zero-g station when the massive negative health and quality of life impacts of zero-g were known?
18
Astronauts make a lot of CH₄ and some H₂ as well; do space capsules and space stations have systems to remove these?
16
What can the ISS do that a SpaceX Starship could not?