Which part(s) of the Goddard Rocket is(are) the rocket, and why (actually) no fins?

I was reading this comment about the Pendulum rocket fallacy under this answer and looked at the picture (below) as I've seen it (or similar) in science books all my life, and I realized that I don't understand how that thing works. I do understand that the engine is near the top, and at least one of the propellant tanks is at the bottom, but does that large "cage" that Goddard is holding on to stay on the ground? The equivalent of the "rocket body" is only the two vertical rods - held at their midpoints? When launched, did it just slide freely through those those U-shaped holders?

And what is the stuff at the bottom - ground level? Is it just holding the rocket from tipping?

And finally, did Goddard really not have the "Use of basic Newtonian mechanics"? Or is it really that the point of this configuration was to first demonstrate and study successful launch and engine function under acceleration in flight, and once that was off the ground, the study of in-flight stability* could be done with next generation designs? 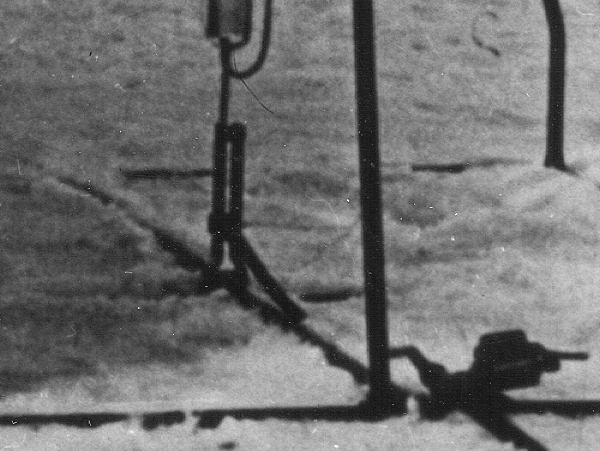 above: Cropped details of a photo of Goddard and Rocket originally from NASA and described as "Dr. Robert H. Goddard and a liquid oxygen-gasoline rocket at Auburn, Massachusetts. 8 March 1926 (according to National Air and Space Museum)"

The A-frame is the "launch pad" and stays on the ground. The bit at the top is the engine; the two vertical rods (pipes) deliver gasoline and LOX from the fuel tanks at the bottom. The tank assembly has a conical shield on the top to deflect exhaust.

The Wikipedia article on Goddard describes the rocket rather well. It also strongly implies that the tractor layout was expected to produce stability:

It is generally more difficult to build a fuel-at-the-bottom tractor rocket (because fuel needs to move up) and less efficient (because exhaust needs to be diverted sideways, reducing thrust as the cosine of the deflection angle), so you wouldn't do it if you didn't expect an advantage.

The trajectory taken by this first rocket probably owed more to a burn-through of the engine nozzle than to the pendulum fallacy, however.

This image shows what's at the bottom: 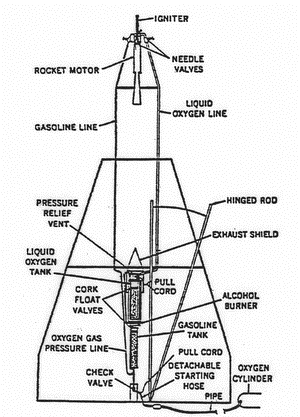 That's the line for filling the LOX tank.

Not the answer you're looking for? Browse other questions tagged rockets history first-flight or ask your own question.

33
Why are Rocket engines at the base of the rocket?
16
What are some practices of space exploration that are no longer acceptable?
15
Why are satellites and other payloads always placed at the top of rockets?
3
Pendulum rocket fallacy - so why *do* skyrockets have sticks?

9
Oberth effect for Earth vehicles
3
Simulation of a rocket with no fins
13
Are there commercial rockets with fins?
8
What is the most expensive part of a rocket?
1
Why use thrust control systems rather than fins?
8
Did von Braun have "a thing" for fins? Why did Saturn I block 2 get fins because it's a "von Braun" rocket?
13
Why multiple GPS satellites are never launched on the same rocket?
7
What was the first rocket with de Laval (convergent-divergent) nozzle to fly?
3
Pendulum rocket fallacy - so why *do* skyrockets have sticks?