I read SpaceX’s biggest rival is developing “space trucks” to ferry cargo in an orbital economy in Quartz which linked to this April 2016 outline of ULA's view of Transportation Enabling a Robust Cislunar Space Economy.

This is quite an exciting outline of what the logistics of a a cis-lunar space economy might look like, and there is a lot of ideas and new ways of thinking to take in. One of them seems here to be to not have to cary your 2nd stage full of fuel into space between your first stage and your payload - am I understanding this correctly?

How does bringing propellants up from the surface of the Earth (the other sources are pretty far out there) allow one to avoid Earth's deep gravitational well? Are they going to collect water from clouds instead? I'm missing something here! 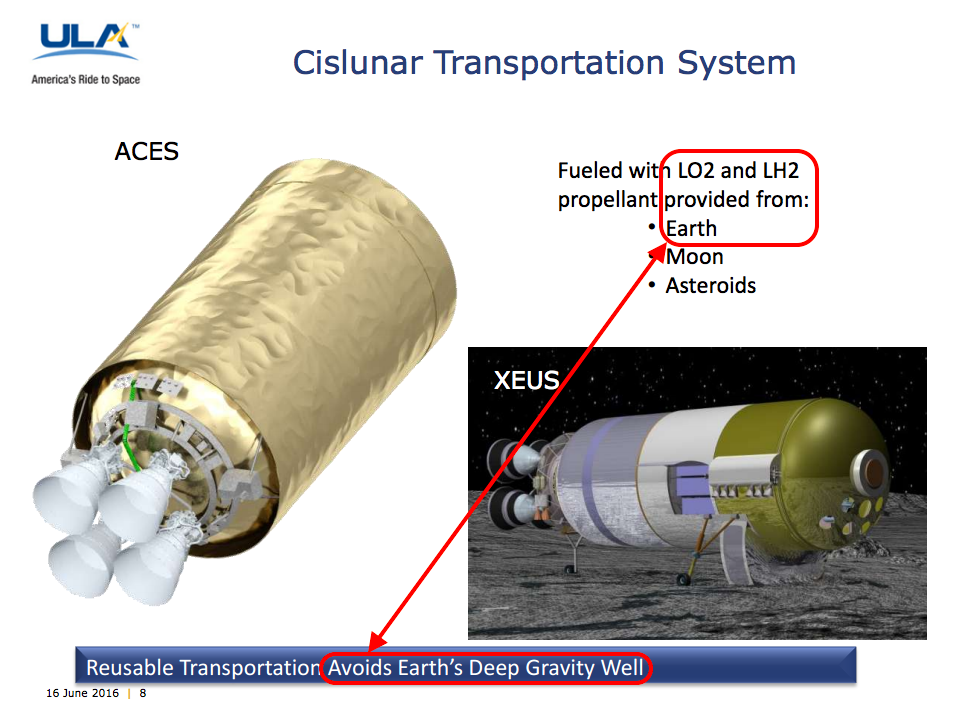 For missions that require more fuel than the standard ACES stage contains, they propose to launch 2 rockets, one with the ACES stage and payload, one with extra LOX en LH.

They also propose using the ACES stage and XEUS lander as space tugs, keeping them in space for a long time instead of having to launch a new one for every mission. That's what the 'avoid Earth's gravitational well' is about.

I believe the point is that the spacecraft itself only has to get out of Earth's gravity well once.

Until ISRU propellant sources on the moon are up and running, propellant still needs to be brought up from Earth's surface, but regular bulk propellant-only launches to a fuel depot in LEO have different engineering requirements that may allow for cost reduction. This is sometimes referred to as the "big dumb booster" concept. The payload is cheap and easily replaceable, so the launcher doesn't need to be as reliable; the payload doesn't care about g-force, so higher-g trajectories (which lose less energy to gravity because of their shorter ascent time) can be considered, making everything more efficient.

Because propellant is generally a large majority of a spacecraft's fueled mass, keeping the spacecraft out of the gravity well while still having to truck propellant isn't a huge win, but it can be a win.

Not the answer you're looking for? Browse other questions tagged rockets fuel upper-stage ula refueling or ask your own question.

9
Has on-orbit refueling ever been demonstrated with cryogenic fuels?
7
How would a bulk payload like fuel (instead of delicate technology) change boost to LEO optimization?

4
What fraction of a liquid rocket launching from Mars to return to Earth would be fuel?
2
How much energy is required to send a payload of 40 t from Earth's surface to LEO?
10
What is the object protruding from the left side of the payload fairing during ULA Atlas V 501 AFSPC-5 launch?
1
Possibility of moving Earth's orbit from continual rocket ejections
1
Why aren't deep-space probes launched from space?
6
How deep into space will the live feed from Starman remain active?
0
Scoutleader looking for understanding of fuel burn for getting away from earth gravity Vs. fuel expended when traveling from A-B in space
6
Why is NASA buying expensive rockets from ULA when SpaceX is offering the same thing for almost half the price?
2
At a height of 100 km, what speed do you need to be going to escape Earth's gravity?