What are the advantages and disadvantages of sending a telescope into deep space? [closed]

When I first heard of the Voyager missions I thought this: why not do the same, only make it a telescope? I thought it would surely see a lot of things we can't see from Earth or the inner Solar System. I just thought that when you're in a place that's sufficiently different, you start to see different things or the same things differently.

Now I'm not sure the outer reaches of the Solar System are far enough to produce enough change in what's visible.

deep-space space-telescope
Share
Improve this question
edited May 28 '20 at 1:54

The advantages of getting a single telescope into space might be.

Very little of that changes though, between LEO and 'deep space'.

Once a single telescope has gone far enough, it does enable us to see different perspectives on local objects. E.G. This picture of Saturn taken by NASA’s Voyager 1 spacecraft in 1980. 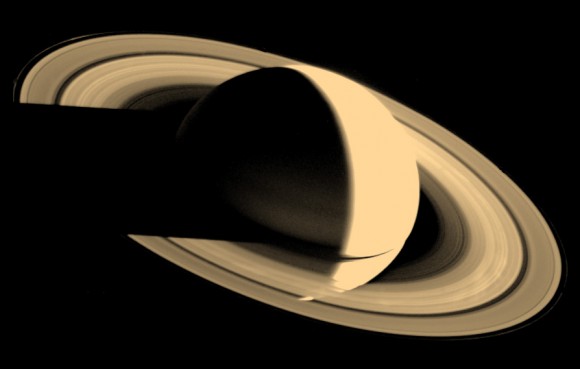 It does also raise the possibility to pass directly behind the planet and view the upper reaches of the atmosphere as they filter the light from the Sun. I believe this can aid in determining the composition of the atmosphere.

Saturn eclipsing the sun, seen from behind from the Cassini orbiter.

Having said that, I suspect the atmospheres of most objects in the Solar System is pretty well quantified, and getting such images would add little to our existing knowledge.

When it comes to groups of telescopes the situation changes for at least one, possibly two, more abilities.

Parallax measurements. Sending a pair of telescopes into deep space, or a single scope with an Earth(/Earth orbit) based counterpart, would allow us to view the 3-D nature of the galaxy to a greater distance/depth.

Pair with one in Earth orbit, the other in orbit about another planet

Baselines for parallax measurements for pairs of telescopes, assuming the images are taken at the same moment as opposed to '6 months apart' as is done to get the maximum parallax possible from a single point on Earth.

Maximum baseline advantage between Earth orbit and the orbits of other planets, when in opposition. Approximate, given the distances are the average of the elliptical orbits.

Minimum baseline when both planets are on the same side of the sun. 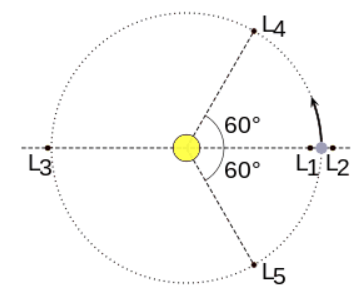 The L2/L3 Lagrange points would be most optimal. Since these are on the opposite side of the sun by definition, the baseline will change much less over time. The baselines are (very) approximately as much larger than those of Earth's L2/L3 distance, directly in proportion to the orbital radii of the other planet.

I wrote "(very) approximate" above because the L2 point is very much affected by the mass of the planet (bigger mass leads to further away from the planet) and distance from the Sun (larger orbital radius leads to larger planet/L2 distance).

An astronomical interferometer is an array of telescopes or mirror segments acting together to probe structures with higher resolution by means of interferometry. The benefit of the interferometer is that the angular resolution of the instrument is nearly that of a telescope with the same aperture as a single large instrument encompassing all of the individual photon-collecting sub-components. The drawback is that it does not collect as many photons as a large instrument of that size. Thus it is mainly useful for fine resolution of the more luminous astronomical objects, such as close binary stars.

Would it be possible to power such a device?

Quite possible with nuclear power generation. The main power drains would be:

Would such a device be so expensive as to become inviable?

I have little idea of the cost, and even less of what is considered viable.

Yes, there is at least one advantage to a deep-space telescope. That would be getting away from our Sun's dust cloud to avoid the reflected Zodiacal light. In fact, such missions have been proposed in order to study the Extra-Galactic Background Light which is blocked by Zodiacal light. They would ideally like to get out to 5 AU and well above or below the ecliptic.

Such telescopes do not have to be very large, nor transmit very much data in order to improve on our current ability to see the EBL by a few orders of magnitude. That sort of increase gets astronomers very excited.

Technologically, we could certainly do it. We could power such a telescope using nuclear cells.

However, as you mention! you would have to send these things a long ways just to produce the most minute change in our perspective. Since we are talking about hundreds of thousands of light years, the distance to the outside of the solar system wouldn't be close to enough.

By the time you got a telescope far enough to produce a real change in what we can observe, it would be next to impossible to communicate with it, and latencies would be upwards of months.

The main advantage of such a telescope would be the ability to look through space without an atmosphere in the way - and the Hubble telescope already has almost all of that advantage.

An IR telescope launched into deep space would be free of any meaningful source of heat and would be able to operate at optimal temperatures pretty much indefinitely. Indefinitely, in this case, being defined by the lifespan of the telescopes critical hardware components. 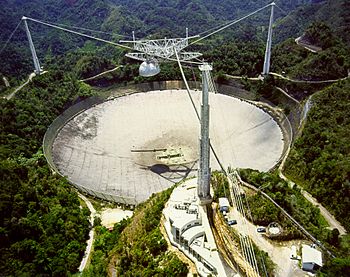 There is no actual technology to receive data from such telescope.

Look at the picture. This is SETI@home's radio telescope. It is situated in Puerto Rico. There is no technology on the Earth, to move all amount of data by radio or wires to Berkeley, California, but physically, with whole of storage, magnetic tapes in that case.

The SETI@home project uses a sneakernet to overcome bandwidth limitations: data recorded by the radio telescope in Arecibo, Puerto Rico is stored on magnetic tapes which are then shipped to Berkeley, California for processing. In 2005, Jim Gray reported sending hard drives and even "metal boxes with processors" to transport large amounts of data by postal mail.

However, radio telescope in Arecibo, is a largest one.

Probably, it is hard to win anything with deep space's telescope, because data received from it, will not be so preciseness.

Not the answer you're looking for? Browse other questions tagged deep-space space-telescope or ask your own question.

35
Why is it hard to take a high quality image of far away objects (like Pluto) using a high-tech space telescope?
1
Is there any plan to send a space telescope to orbit around gas giants?
42
Why are so many space telescopes placed in LEO instead of at Lagrange Points? And why do we hear about Hubble more than any Langrange-orbit telescope?
10
What might the first deep space telescope using the Sun or Jupiter as a gravitational lens be like?
2
Roughly what fractions of the time did Skylab spend in Earth-oriented and Sun-oriented attitudes?
1
If a comet-sniffing spacecraft were launched today, could it catch up to newly-discovered ε>3 C/2019 Q4 (Borisov)?
3
Use of carbon nanotube based black colourings like Vantablack in space
5
How much does launch costs have to come down to make chemical fuel deep space probes feasible?
1
Will future deep space optical communications "ground stations" actually be in space, or on the ground?