How did the USA cooperate with western allies during the Apollo program?

France launched its Diamant rocket to orbit between 1965 and 1975, and the UK its Black Arrow 1969-1972. Did they take advantage of NASA's rocket development experiences?

Were any Apollo system components developed in Europe, like the service module for Orion today? I know that the still camera used on the Moon was a Hasselblad made in Sweden.

The UK did take some advantage of American components, the engine programme for Blue Streak started with licensed American designs that were progressively replaced with indigenous designs. Black Arrow was a purely British development. British companies had some rocket experience because in the 1950s there were several plans (Saunders-Roe SR.53 and SR.177, Avro 720) to use rocket engines to boost military aircraft. This development was superseded by usable afterburners, but not before several rocket engines were developed.

The giant radio telescope at Jodrell Bank played a role in the early days of the space race, tracking Sputnik and others via radar, and assisting with (IIRC) some of the early US Moon probes. By the time Apollo started, NASA had enough large antennas of its own and Jodrell was no longer used officially (they still pointed the antenna at the Moon for the Apollo 11 landing and listened in on its communications, IIRC).

France did not use American technology, Diamant was a purely French development.

Both nations' rocket programmes started as military programmes, with the desire to have a nuclear deterrent independent of the Americans. That meant occasional reinventions of the wheel were inevitable.

There was at least one European contribution to Apollo in the shape of scientific experiments. I don't believe any Apollo spacecraft hardware was built in Europe. NASA did buy some loose items of equipment in Europe though: NASA used Hasselblad cameras (standard cameras with some modifications) and Zeiss lenses (some standard, some specially designed for NASA) in the Apollo program.

A consortium of European scientists created the Biostack, which flew in the command module of Apollo 16 and 17. The principal investigator was from Germany. 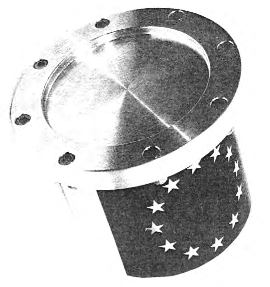 The objectives of the biostack experiment were achieved by using a hermetically sealed aluminum container [see picture] that contained a series of monolayers of biologic material sandwiched between several different types of detectors of galactic cosmic radiation particles. The biologic effects of high-energy particles under consideration included the following.

a. Physicochemical inactivation of molecular and cellular function

b. Radiation-induced mutations leading to genetic changes of biologic significance

c. Modification of the growth and development of tissues

d. Radiation-induced damage to nuclei and other subcellular functions

Organisms carried in the Biostack included:

A French (and a Soviet!) station also cooperated in laser ranging of the reflectors left on the moon: