Using weather balloons pressurized to not to pop in a chain from the ground what is the highest altitude possible in a chain?

You could up scale to use blimps but it is a balloon that can achieve the highest altitude of 53km without a tether. Wind is not a factor in the model. 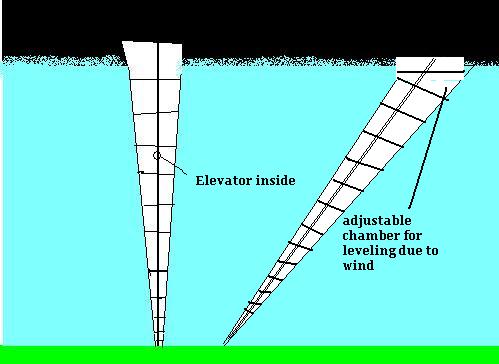 I would use this to run a power line vertically or just make a ladder to sky dive from. 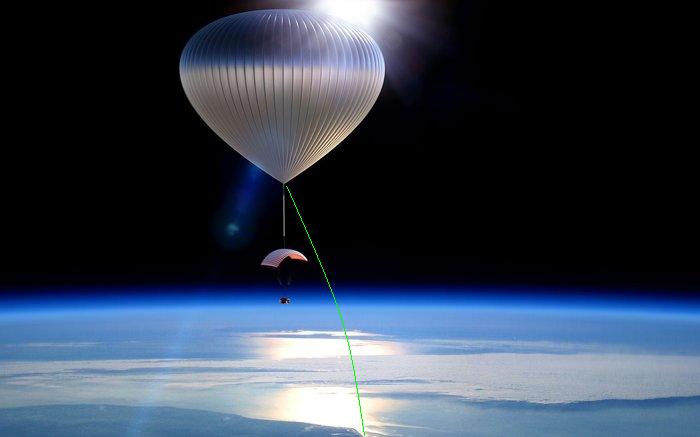 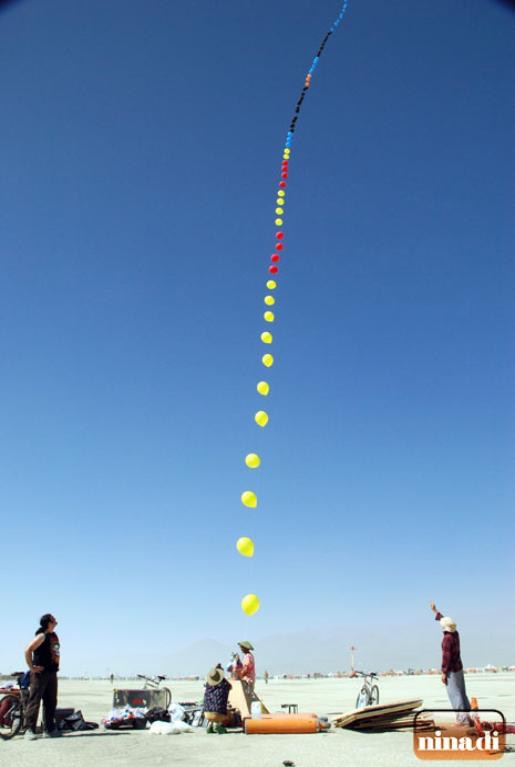 Summary: No, this won't work in any way, shape or form. And if you did get it to work, it'd be more expensive than using rockets.

Aircraft can get to an altitude of ~30 km. Above that, the atmosphere is so thin you need unfeasibly large wings to provide enough lift. An aircraft that flies next to a rail is no different in this regard.

Then there's the method for transferring power from the rail to the aircraft. This has been studied extensively: trains use the same method to transfer power from their overhead catenary wires. At a speed of 500 km/h this is already problematic, as the SNCF found when preparing for the world speed record with their TGV. The pantograph presses against the power wire/rail. This moves the power wire/rail. At low speed, this movement is small enough that the pantograph remains in constant contact with the wire.

At high speed, the pantograph can't follow the wire reliably anymore so you get intermittent contact. Applying more (mechanical) tension to the wire reduces how much the wire moves around, but this is limited by the mechanical strength of the wire. The highest speed ever achieved with such a power transfer method is ~580 km/h or about 200 m/s.

Then there's the distance between the aircraft and the rail. This has to be small enough to allow a structure like a pantograph to bridge the gap. But it has to be large enough to prevent the aircraft from hitting the rail when it encounters turbulence (which can easily displace the aircraft tens of meters).

Even if you can overcome the turbulence problem, you've carried your rocket to 20 km altitude and 200 m/s. You need 200 km and 8 km/s, so all that effort has given a very small reduction of the rocket size.

Airplane-launched rockets exist (Pegasus, Virgin LauncherOne) but they aren't common. Most rocket companies don't think it's worth bothering with an aircraft as the first stage. An electric-powered aircraft would add several more hurdles to an already difficult problem.

It seems you're trying to make the launch cheaper by saving fuel. But the fuel cost is a negligible part of the cost of a rocket. A SpaceX Falcon 9 costs \$60M to launch. Only \$200k of that is the fuel cost.

Even if you could accelerate to 1000 m/s on your launch system, that leaves 7000 m/s that must be provided by the booster. 7/8 of a Falcon 9 is still a \$60M rocket, it'll just be a bit shorter than the current F9 because it needs less fuel. The only cost advantage is in a barrel section for the fuel tanks you can omit, and those are cheap parts.

So in order to save a few hundred thousand per launch, you're proposing a rail system and dozens of blimps. Launch rates would have to be huge to make that economically feasible. Until then, using an aircraft as the first stage is a better option, and even that has its limitations, as no aircraft exist that are large enough to launch e.g. a 4-ton communications satellite into GEO.

Catenary wire as used by railroads weighs on the order of 600 kg/km.

The largest high-altitude balloon is 0.5 million m3 and has a lifetime of 30 days.

So your balloons would need to be 10 times larger than the largest high-altitude balloon ever made, and you'd need to replace them every 30 days.

The string needs to be at a shallow angle to prevent the aircraft from stalling. Say a 1/10 grade. To reach 50 km altitude, you need a string 500 km long.

The X-15 rocket plane topped out at ~2020 m/s (~4520 mph). Both of these fell well short of what is required to reach orbit (which is what I interpret most people to mean when they say "space").

And, of course, you run out of usable atmosphere to generate lift well short of LEO.

So, yes, you definitely need rockets to actually reach orbit, meaning you need to carry the mass of the rocket engine and propellant with you as you climb the cable.

Then we have to consider the following logistical issues:

Then there are some engineering questions I'm in no way qualified to answer, like how thick the conductor needs to be to transfer sufficient power without melting, how to generate that power, how much is lost to resistance by the time you get to the top of the conductor, etc.

In short, this is not a practical approach.

Anything that saves you gravity losses is a good idea, which is why some people have developed airborne launch systems - the rocket isn't fighting gravity for as long as it would when launched from the ground, which does save quite a bit of propellant mass. However, airborne launch simply isn't practical for anything but small payloads. It's a lot easier (at least from an engineering perspective) to build bigger rockets than to build bigger airplanes.

Not the answer you're looking for? Browse other questions tagged reuse space-elevator or ask your own question.

-6
Inflatable Power Line?
3
How to transport gigawatt-level power across a 100km distance?