Why do the shapes of these two exhaust plumes from an Atlas V 411 look different?

The Atlas V 411 configuration is interesting because there is a single SRB on one side of the first stage, requiring the main engines to vector substantially to keep the thrust mostly axial.

The series of beautiful images in Space Flight Insider PHOTO GALLERY: LAUNCH OF NASA’S OSIRIS-REX show the night launch, and details of the single sided booster of the Atlas V 411 configuration.

In one image I noticed that the exhaust plumes are expanding differently - the SRB exhaust is expanding nicely, but the exhaust from the main engines appears to contract after it exits. Does this mean that the pressure in the exhaust is actually sub-atmospheric (if I put a rugged pressure meter in there, moving at the same speed as the exhaust would it read below 15 psi?) , or is it moving so fast with respect to the atmosphere that the "Bernoulli effect" causes a pressure drop across the interface, causing it to contract?

I'm looking for more than the simple answer about compromises in expansion ratio - I'd like to know if the pressure in the first stage exhaust is really sub-atmospheric in a frame moving with the exhaust itself. 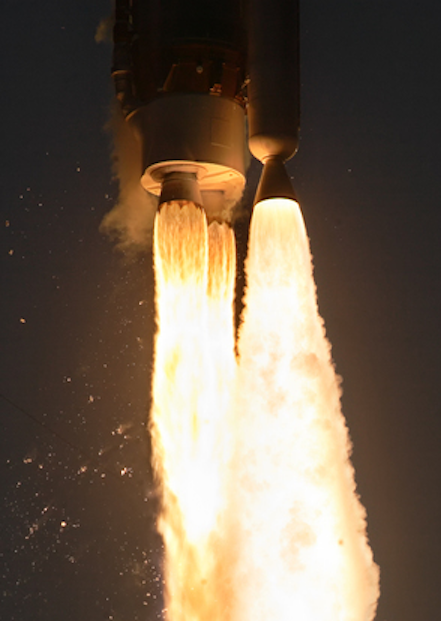 above: cropped detail of a photo of Atlas V 411 launch of OSIRIS-REx from Space Flight Insider (photo credit details here) 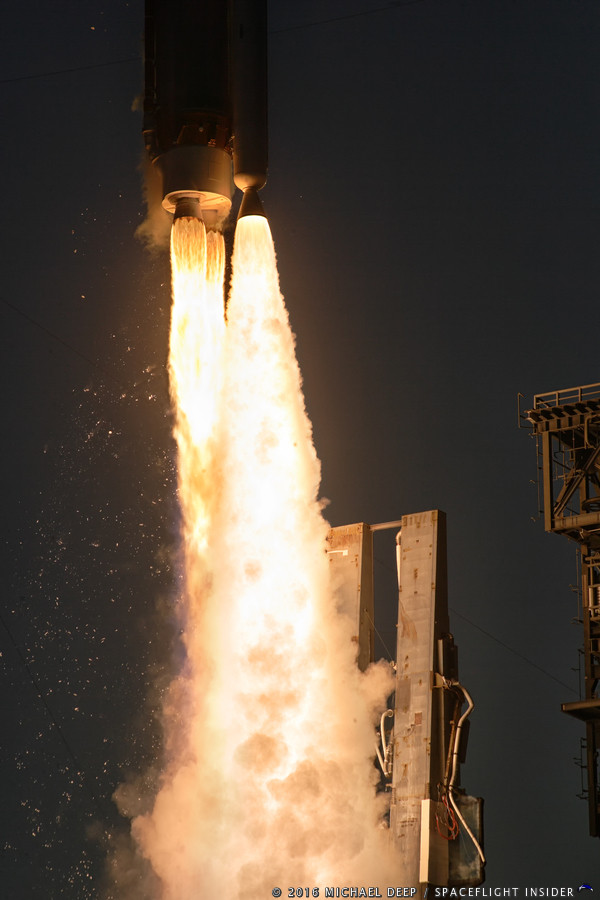 Yes, the pressure of the first stage exhaust is always at least slightly subatmospheric, because that gives the maximum average ISP over the whole burn time. Rockets with boosters attached (parallel staging) often operate at the lowest possible exhaust pressure that prevents the flow from detaching from the nozzle walls. Historically, the Summerfield criterium was used, where the minimum pressure in a nozzle must be greater than 0.35...0.4*atmospheric pressure, but more recent designs use even lower pressures. For example, if I remember correctly, the Vulcain 2 was designed using the Schmucker criterium, which factors in the Mach number as well.

Not the answer you're looking for? Browse other questions tagged ula srb atlas-v exhaust osiris-rex or ask your own question.

3
What is the 'Summerfield criterion' regarding rocket exhaust expansion
5
Are side boosters sometimes angled even if they are symmetrically arranged?
8
Why would a significant non-zero angle of attack be an advantage during 1st stage burn?

5
Why are the exhaust plumes exiting the nozzles of SpaceShip Two segmented along their length?
5
What does the exhaust plume of a rocket look like in vacuum?
10
What is the object protruding from the left side of the payload fairing during ULA Atlas V 501 AFSPC-5 launch?
9
Why does Atlas V have so many different types of payload fairings?
2
Is the unusual pattern/shape of SpaceX exhaust due to atmospheric pressure?
8
On large diameter Atlas V fairings, why is the Centaur inside the fairing?
3
Why does the exhaust plume apprear to be throbbing?
5
What factors determine the altitude at which rocket exhaust plumes start blooming hugely?