How would vertical landing scale with size - does bigger = "easier" (actually)?

This Ars Technica article has two titles that seem to be a bit gratuitous:

Why Bezos’ rocket is unprecedented — and worth taking seriously

Why Blue Origin’s crazy big rocket might fly, and what it means for spaceflight

and the link itself contains:

The article then links to a previous article, with the Bezos quote:

"The reason I like vertical landing is because it scales so well," he explained. "New Shepard is about 80 feet tall. It’s the shortest vehicle we will ever make. It gets easier to land the vehicles the bigger they get. It’s the inverted pendulum problem. It's easier to balance bigger things. I like those architectures. Parachutes have the opposite problem; as things get bigger, it's very difficult. You can’t build a parachute 1,000 feet in diameter. Even wings, they scale pretty well to a certain size, but they end up being a lot of dead weight to carry."

An example of the inverted pendulum would be balancing a broom stick on your index finger.

Is there a simple way to understand why a substantially larger rocket would be easier to land vertically? All I can think of is that the dry weight would increase faster than size cubed $(L^{>3})$ to maintain structural integrity (the same reason there can't be Godzilla sized exoskeleton creatures) but the drag force would scale only as $(L^{2})$ (keeping aspect ratio constant), but I'm just grasping at straws here. The New Glen first stage will not have the same aspect ratio as the Falcon 9 first stage, as mentioned in Wired:

But even though, at 270 feet, the New Glenn is much taller than a Falcon 9, the Blue Origin rocket is also much fatter. In terms of aspect ratio, this means it will be easier to control as it comes down.

…but I don't think Bezos' argument is based solely on aspect ratio, and I don't understand why a smaller aspect ratio would make vertical landing easier - is it the larger moment of inertia?

Is this explained or worked out somewhere? If not, is there any physics/engineering rationale that could be expressed here? 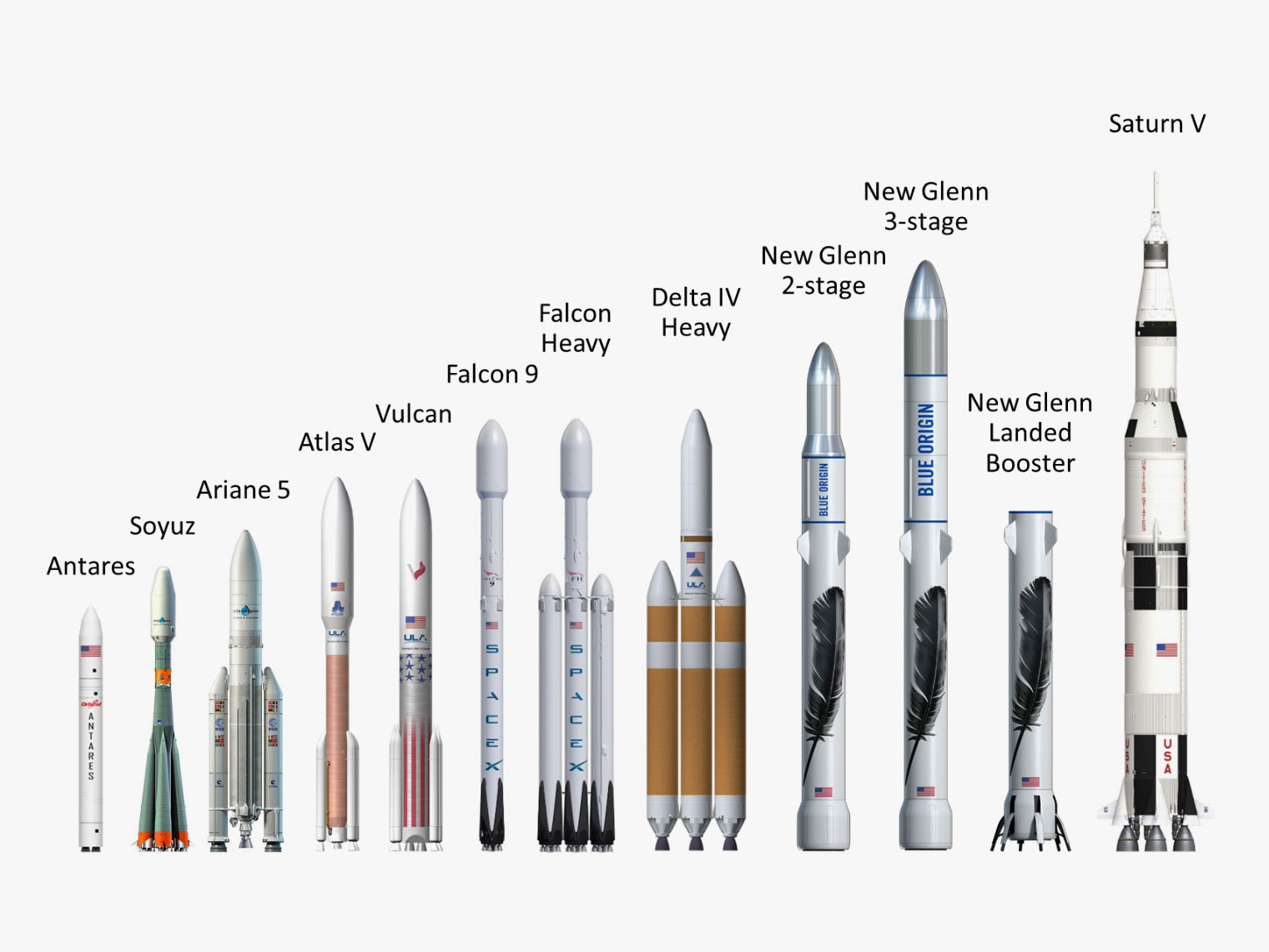 above: size comparison of various rockets from Wired with credit to Blue Origin. Right click to view full size image.

above: illustration of an inverted-pendulum-type problem from here.

The mass of a pendulum doesn't affect its period, but the length does; the longer your rocket, the slower it will tip (in degrees-per-second) while off-balance, and the more time you have to compensate for minor shifts before you have a catastrophe.

Gimbaled rockets have excellent control authority, and the engine thrust will scale with the rocket mass, so in general you can compensate for any small gust of wind or data error if you have sufficient time. A long pendulum gives you that time.

As far as the "fatter" stage, perhaps the advantage there is that the engines, being mounted further out from the centerline, can produce more torque at smaller deflection angles? This would reduce the coupling between vertical acceleration and rotation, affording more tolerance in throttle response time.

62
Why does the SpaceX reusable launcher use vertical rather than horizontal landing?
25
How does the Falcon 9 know where the landing barge/pad is?
3
Does SpaceX performed low subsonic speed wind-tunnel runs of Falcon 9 booster in landing configuration and with legs eventually opened?
12
How does the landing accuracy of Dragon (under parachutes) compare to Soyuz?
49
How does the SpaceX Falcon 9 first-stage straighten for landing?
10
What is the cause of the blue light from LH2/LOX rocket engines?
15
Why does Blue Origin "like landing on a moving ship"?
17
How does a landing spacecraft control main parachute inflation?
5
How does SpaceX Falcon 9 keep balance while it is near to the landing site?
1
How is New Shepard the first suborbital booster to successfully perform a powered vertical soft landing?