What regulations, agreements, or other forces can help mitigate "PrankSats"? [closed]

comment: I've used a somewhat innocuous abstraction of 'pranks in space' below, but there's no end to the trouble that could be caused and the increasing ease with which a state (nation or otherwise) could cause it. The scope of Article IX of The Outer Space Treaty of 1967 is pretty narrow - what exactly happens if party A says that party B may be in violation of article IX? Is there a board of arbitration? Are there any mechanisms of 'punishment' established? What about a non-signatory state? Misdeeds on earth are getting easier to detect and report by independent news media, but how many news orgs have NORAD's capability?

The discussion in the recent article in The Conversation: SpaceX explosion shows why we must slow down private space exploration until we rewrite law focuses mostly on accident and liability issues, and points out that the 50 year old Outer Space Treaty ratified in 1967 may need to be dusted off and looked at more closely. I'd recommend reading the full article - here is a paragraph near the end:

With the increase in private participation in space experimentation and perhaps even mineral mining, the provisions governing civil liability over mishaps arising from the operations of a space station are likely to become one of the most contested areas of space law. What if a module or component part fails to function on a space station? In the absence of multilateral rules on this point, a patchwork of legal rules is gradually maintained through MOUs (Memorandum of Understanding) and other national laws such as the US Commercial Space Launchings Act (CSLA) of 1978. How will private companies fit into these as they possibly become partners?

Further, the "PrankSat" situations may multiply when it becomes more and more common to add significant propulsion capability to cubesats, and control may not be under the same number of levels of security that is currently used for "serious" satellites.

Other terms that may apply in some cases include "tit for tat-sat" and "a proportional response-sat." 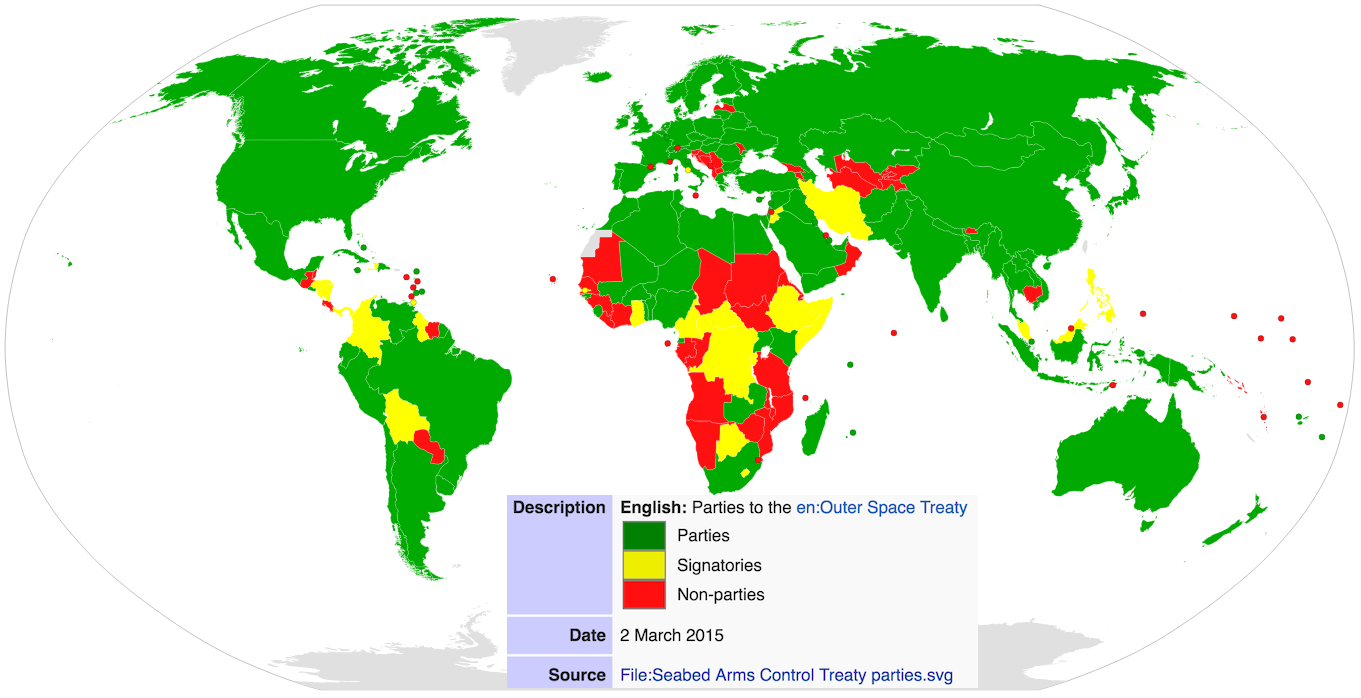 above: Outer Space Treaty parties, signatories, and non-signatories as of March 2015 from here, modified by pasting legend (sorry Antarctica).

If a hypothetical President Wisenheimer felt secure that his/her country's large supply of neodymium, palladium and unobtainium gives them some economic protection, what international regulations, agreements, or other forces could help the rest of the world stop, or at least discourage the president from allowing his/her brother in law's aerospace company OrbitalPranksters from launching PrankSat and putting it in orbit in front of the Hubble Space Telescope? 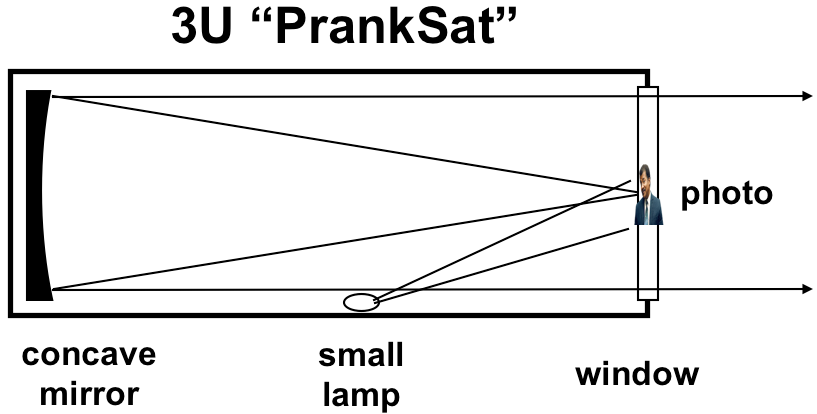 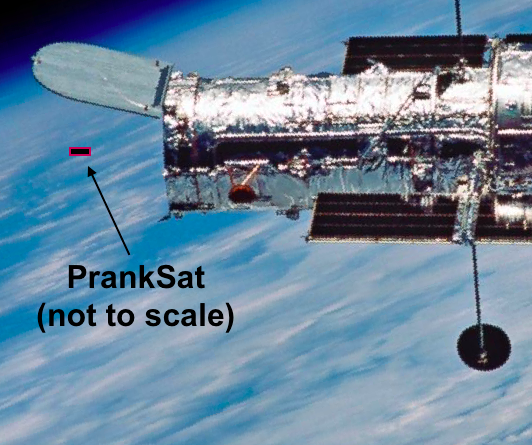 The pranksters know what a collimator is, and understand that the basic point-to-parallel-to-point method will add to the image on the CCD even if it significantly under-fills the telescope's aperture. It will be in focus at all distances since both have infinity conjugate focci. (image from a randomly chosen internet optics catalog), and here are some other collimators that project images into telescopes.

PrankSat could navigate near the HST, or - since the divergence of the FOV is small - intercept the scheduled HST view from kilometers away and "Flash". It could also attach itself to the HST in some way, occasionally move into view, and really become a pest. above: I found this on the internet. Used with warm regards to Dr. Tyson and all he does to further the public's understanding of science.

For your specific example, the answer is cost. Nobody is going to spend hundreds of millions (or even just 1% of that) just to prank a community of astronomers.

For other examples? What stops China or Russia from launching a set of rockets to destroy GPS satellites, or military communication satellites? Neither country wants to initiate World War III. What stops a private company from doing the same? Cost, technological capability, laws, negative consequences, lack of positive consequences, etc. Even though private space industry is coming up, it's still heavily government regulated. If a private company in Russia were to launch a set of rockets from Russia that just happen to destroy the GPS constellation (why the heck would they do that?), the Kremlin probably should expect a phone call from the White House, and quite likely somewhat more than that. If Inmarsat were to launch a set of rockets destroying the Iridium constellation, they won't stay in business terribly long.

The answer, as gerrit has eluded to, is that going to space is hard and expensive, which places it outside the realm of even the most dedicated pranksters.

For example, assuming you can get your pranksat a launch, there is a bevy of launch-vehicle levied requirements on how your pranksat must be designed. Each of those needs to be validated through (most likely) testing, to ensure that your payload will not harm the launch vehicle (for example, by shaking apart in its container.) The facilities and knowledge to execute such testing and design is expensive.

There's also a ton of national and international bureaucracy involved in going to space. How would you talk to your prospective pranksat? You'd likely use radio, which in the United States places you under the thumb of the FCC. It would be difficult to convince the safety-oriented bureaucrats at the FCC that a pranksat is worth allocating the radio bandwidth.

Finally, the act of conducting rendezvous is non-trivial; determining a spacecraft's orientation and position requires specialized hardware and software that requires considerable expertise to construct. Additionally, flying around near other spacecraft is a great way to collide with them, causing at the very least an international incident and at the worst a major debris-causing incident.

While cubesats are becoming more common, the factors outlined above place hard constraints on the cost and inherent risk of building the type of pranksat you outline.

Not the answer you're looking for? Browse other questions tagged launch cubesat regulatory or ask your own question.

10
Most accurate attitude determination system in spacecraft?
12
How can just making the ground broadcast stronger neutralize a zombie(sat)?
6
How rare is it in the 21st century to use five stages to get to LEO, especially for a low-mass payload?
5
Are there orbits for a starshade and a telescope to stay linear to an interstellar object?
8
Does the US Navy guard SpaceX drone ships and make sure bad actors don't abscond with critical technology on the high seas?
5
How will insurance work for manned commercial missions?
3
North Korean objects 41332 and 41333; how fast are they losing altitude?
4
Is 45 km unusually close to pass the ISS and deploy a microsatellite without warning?
3
Has a cubesat ever caused a problem for another spacecraft? Examples? Close calls?
0
What inclination change could the 5th stage Orion 38 motor provide ORS-5 (SensorSat)?
See more linked questions

26
What are the possible legal consequences of an unauthorized launch of a satellite?
27
At what height does it become international territory / outer space, instead of state-controlled air territory?
33
Why didn't NASA use the shuttle to make a profit?
13
Might ISRO's 2018-004 launch be at least a technical violation of the Outer Space Treaty by India?
3
What can be done in future mass-cubesat deploys to make them "less irksome" to orbital space debris experts?
5
The fine prints of launching a satellite
8
Are the SpaceBEEs still "illegal" or did they eventually receive approval to operate?
8
If Country A's rocket hits an incorrectly declared satellite of Country B, which institution can arbitrate the dispute? Under which international law?
4
Does Article VI of the Outer Space Treaty apply to a Launching State?