Curiosity is still dirty! How will the ExoMARS Rover keep its solar panels dust-free and collecting sufficient power?

After snagging a new rock sample on August 9, 2018 (Sol 2137), NASA's Curiosity rover surveyed its surroundings on Mars, producing a 360-degree panorama of its current location on Vera Rubin Ridge. The scene is presented with a color adjustment that approximates white balancing, to resemble how the rocks and sand would appear under daytime lighting conditions on Earth. Two versions are included here: one with scale bars, and one without.

The panorama includes umber skies, darkened by a fading global dust storm. It also includes a rare view by the Mast Camera of the rover itself, revealing a thin layer of dust on Curiosity's deck. In the foreground is the rover's most recent drill target, named "Stoer" after a town in Scotland near where important discoveries about early life on Earth were made in lakebed sediments. 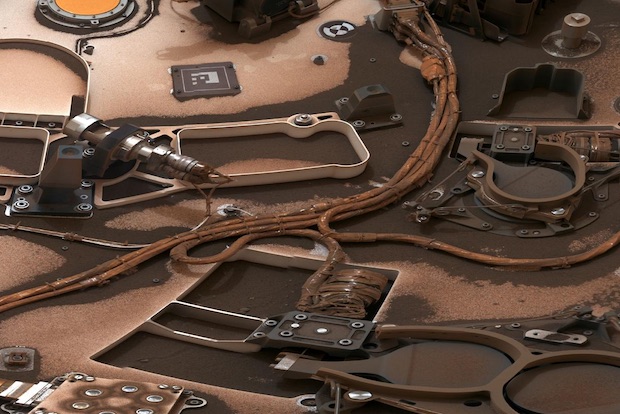 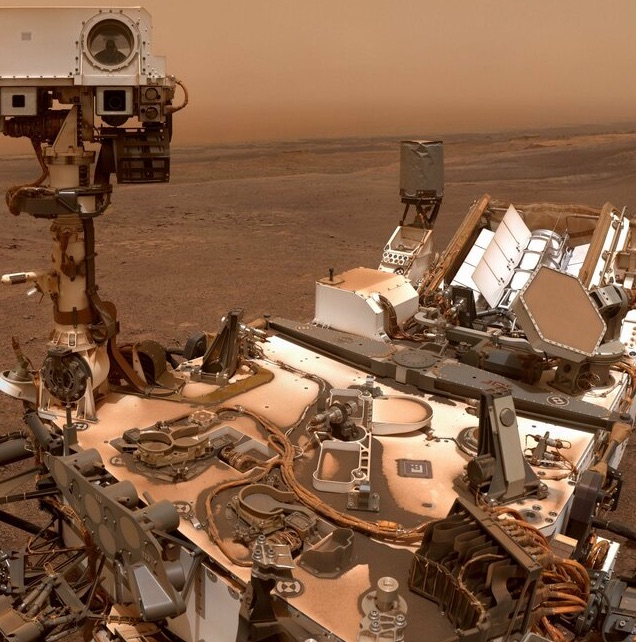 above: even the inclined surface of the high gain antenna seems covered in dust! Cropped from Phys.org's Curiosity says farewell to Mars' Vera Rubin Ridge .

Edit: In light (or lack of light in this case) of the current dust storm on Mars discussed in the recent NASA news article Opportunity Hunkers Down During Dust Storm and since almost two years have passed, I've un-accepted @Phiteros' answer to see if there is an update on ExoMARS' dust-on-solar-panels strategy.

Since it does not have an RTG, ExoMARS relies on efficient collection of solar radiation for its mission to succeed. 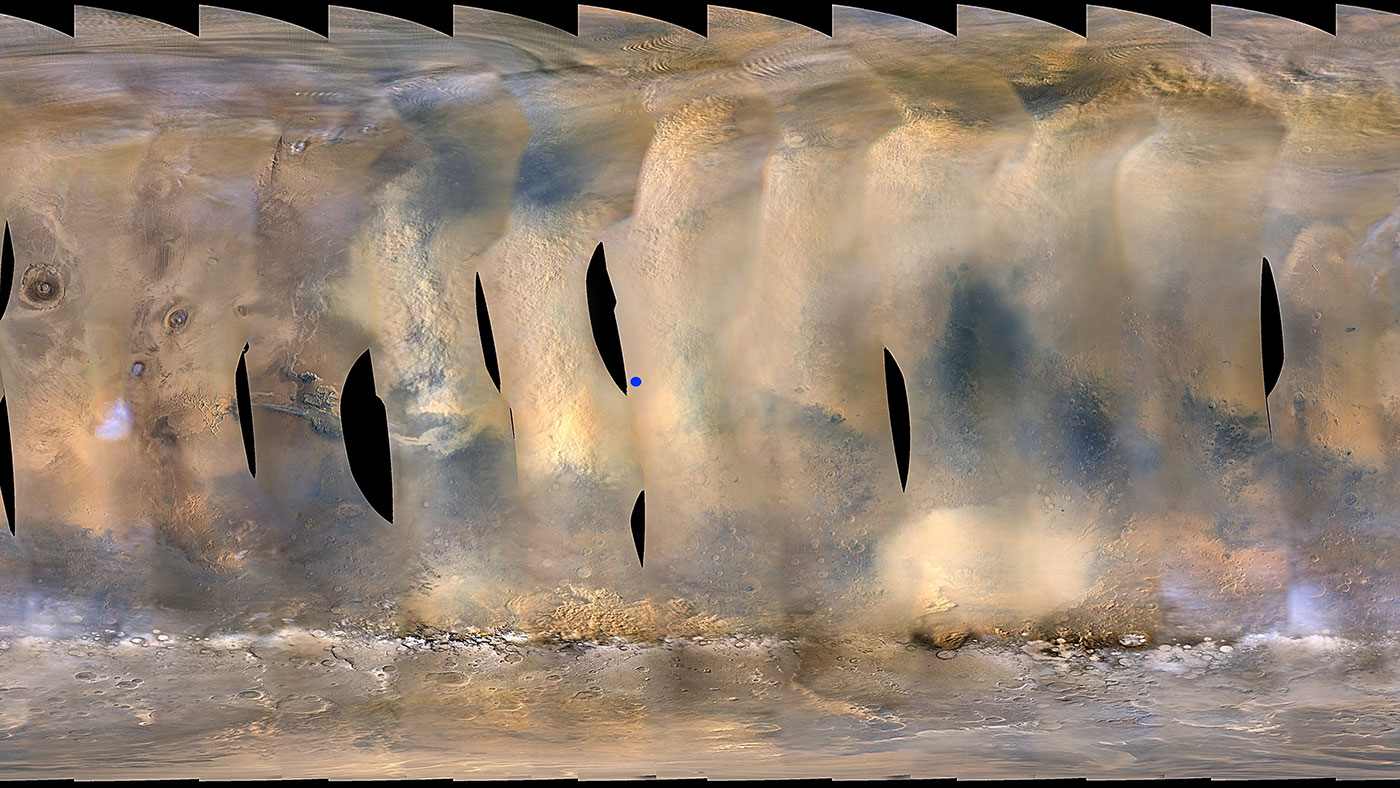 above: "This global map of Mars shows a growing dust storm as of June 6, 2018. The map was produced by the Mars Color Imager (MARCI) camera on NASA's Mars Reconnaissance Orbiter spacecraft. The blue dot indicates the approximate location of Opportunity." From here. Credits: NASA/JPL-Caltech/MSSS

I remember reading stories about the Spirit and Opportunity Mars rovers related to solar power and dust - about problems with dust storms, and parking on an incline for the winter in order to collect enough power to 'stay alive'.

The Curiosity rover carries a large, powerful RTG for both thermal heat (circulating fluids) and of course electrical power.

Now it seems the ExoMARS rover will use solar panels again. The do seem a bit larger compared to the size (or volume) of the craft compared to Spirit and Opportunity, but I am wondering, what management techniques are begin considered for the ExoMARS rover to handle covering of the horizontal panels by dust, or low solar elevation in 'winter'? 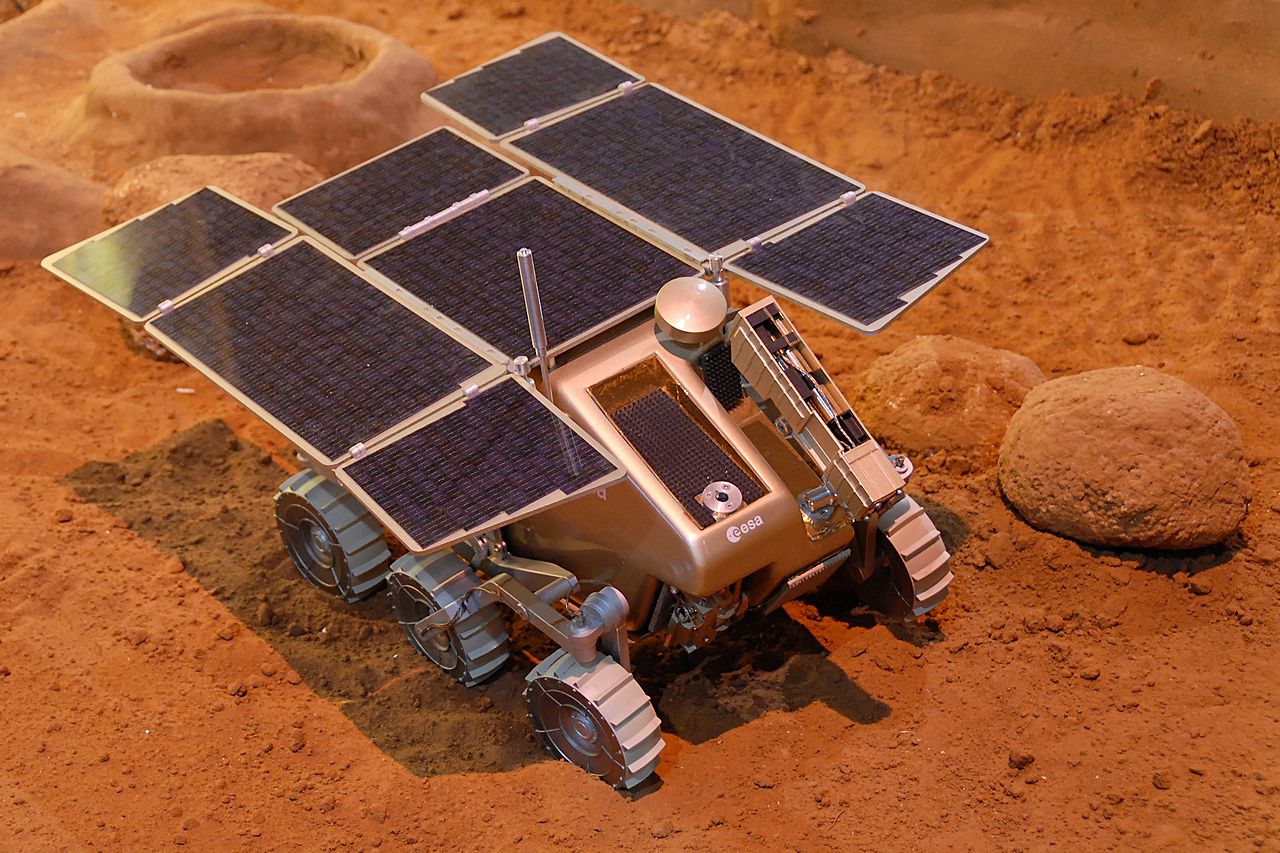 above: "A 1:4 model of the ExoMars rover at the ESA pavilion, 2007 International Paris Air Show at the Le Bourget airport." From here. 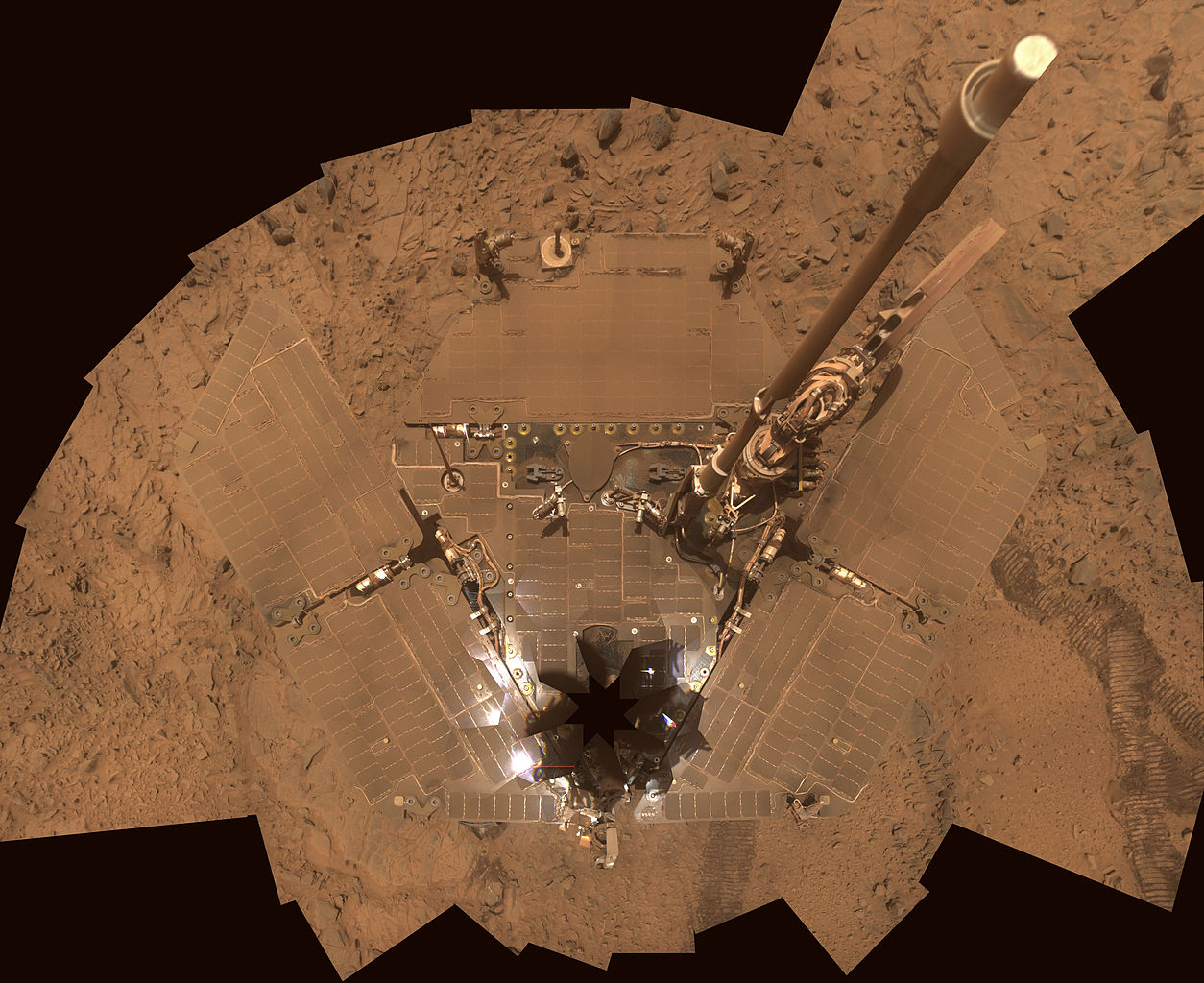 They will likely be relying on two things:

Spirit and Opportunity were only expected to last 90 days, but when it was discovered that the dust occasionally gets cleared off, the missions became much longer. Spirit only stopped when it became stuck in soft sand and could no longer angle its solar panels correctly. Opportunity, on the other hand, is still going, 12 years later.

Here is a news article about one of the more recent cleaning events for Opportunity.

As far as hibernation during the winter, they will likely follow the same techniques used by Spirit and Opportunity. Unfortunately, I do not know this for sure, but since it worked for MER, they will likely use the same legacy technique. Some of the instruments will also have their own independent batteries, such as the DREAMS experiment, which will operate during the dust storm season.

In all likelihood, ExoMars will not have any method to remove the dust. There are several reasons for this. A mechanical device would probably have trouble because of the dust's static charge. Tilting and shaking the rover could work, but it would be complicated and possibly damaging to sensitive instruments. Other methods involve washing them (which requires liquid), using an electrostatic charge (still requires tilting the panels, and could also damage sensitive electronics), and blowing them off (requires moving a high-powered fan across the panels).

This is from 2005, not sure if still exactly the same but the plan is variable inclination solar panels can be tilted anywhere from horizontal to vertical (folded up like a butterfly). So it can tilt them to optimal angle. For a dust storm there's not much light and its from the whole sky, so they use especially efficient solar panels for low light conditions and lower them flat during a dust storm

DEVELOPMENT OF THE ESA EXOMARS ROVER

It was also going to have radioisotope heating units to keep it warm at night so even with no solar power in a dust storm it will still stay warm.

But these were dropped

" RHUs have not been adopted, avoiding the technical and organizational complications associated with their use. The inclination angle of the SA can beadjusted to maximize solar power collection for different landing latitudes. This system also provides flexibility while driving on slopes and permits lowering the array in case of dust storm conditions. "

I don't know if these variable inclination arrays still apply. And they seem to think that dust will impact on operations and leave it at that:

The larger lander and its European-built rover are expected to operate for 7 to 12 months, relying on solar panels for their power supply. Although ExoMars 2020 will arrive outside the main dust storm season, the mission is almost certain to be affected by dust during its operational lifetime. In particular, a build up of dust on the solar panels will reduce power supply and may necessitate a temporary shut down of surface operations.

A stormy arrival for Schiaparelli?

Not the answer you're looking for? Browse other questions tagged mars rovers solar-power dust exomars or ask your own question.

24
Can the Mars lander's/rover's solar panels be cleaned?
13
How are the Mars Rovers maintained?
13
Do Mars rovers protect optical windows during dust storms? Do they "avert their eyes" or do they just "grin and bear it"?
7
Gravel on Curiosity Rover?
4
How long would astronauts' footprints on Mars persist?
7
Is InSight capable of cleaning itself?
7
Could dusters be installed on solar panels on a mars lander?
4
Have any systems on any Mars rovers failed (even partially) as a result of a dust storm? (besides loss of solar power)
8
Has Curiosity ever taken a good hard look at the dirt covering its top surface? Can it? Have individual particles been sized?
8
Perseverance individual sample collection post-mission; what stops them from blowing away or getting covered and hidden by dust?
See more linked questions

17
Why does Curiosity use an RTG rather than solar (as Spirit and Opportunity do) for power?
6
Why is Curiosity remaining on the Vera Rubin Ridge for so long?
4
Have any systems on any Mars rovers failed (even partially) as a result of a dust storm? (besides loss of solar power)
1
Will the Mars helicopter be able to remove the dust from solar panels?
2
Will the Rosalind Franklin (ExoMars) rover solar panels be able to clear themselves of dust by tilting?
13
Do Mars rovers protect optical windows during dust storms? Do they "avert their eyes" or do they just "grin and bear it"?
8
Has Curiosity ever taken a good hard look at the dirt covering its top surface? Can it? Have individual particles been sized?