Is it possible to colonize planetoids by using perfluorocarbon lakes?

Is it possible to colonize planetoids using breathable liquid such as perfluorocarbons (PFCs) with dissolved oxygen and filling craters and depressions with it instead of building insulated habitats?

I think this would require much less oxygen than creating a breathable atmosphere and at the same time would not limit the colonists to the inside of their dwellings.

Besides liquid breathing, fluorocarbons have other wonderful properties:

As uhoh suggests in a comment, one scenario for breathable liquid environment is "walking on the ceiling": 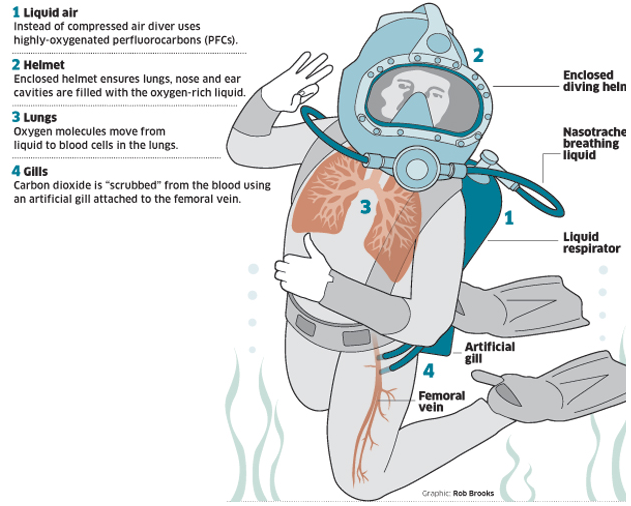 Intriguing idea. I looked briefly at whether Mars' lowest lowlands could contain CFC atmospheres with acceptable pressure at the bottom, plus some oxygen, CO2 and nitrogen for open-air ecosystems. (I was inspired in this partly by C.S. Lewis' Mars, which posited very deep gorges hosting reasonable atmospheric pressure at their lowest elevations; but also by the geological results from Mars rovers, which suggest lots of chlorine and fluorine minerals in the soil.) It never occurred to me that you could have lakes of a breathable liquid. This might require some modifications on people (perhaps prosthetic) to keep the liquid out of their GI tracts; maybe also some neurosurgery to suppress gag reflexes. It might make more sense for agricultural purposes, with people visiting the submerged fields in SCUBA gear and the like.

Not the answer you're looking for? Browse other questions tagged colonization terraforming or ask your own question.

3
What would be the challenges for a settlement immersed in liquid fluorocarbon on Mars?
0
How to calculate the pressure at the floor of Ganges Cavus on Mars when it is filled to its edge with perfluorobutane?

2
Do we have the technology to colonize the nearest habitable planet by sending hundreds of people with spacecraft?
3
Is it possible to make open-air parks on Mars by putting oxygen tubes here and there?
0
Would it be possible to burn off Venus' atmosphere using the sun?
7
What steps is Elon Musk taking to colonize Mars?
16
Can our civilization colonize solar system while reliant on fossil fuels?
3
What would be the challenges for a settlement immersed in liquid fluorocarbon on Mars?
5
Terraforming Mars using a combination of aerogel and GM microbes?