Problems compressing the helium tanks inside the F9 2nd stage LOX tank at the last minute?

"At this stage of the investigation, preliminary review of the data and debris suggests that a large breach in the cryogenic helium system of the second stage liquid oxygen tank took place."

This has been repeated in several news outlets, but spaceflightnow adds:

The Falcon 9 rocket’s upper stage liquid oxygen tank contains several composite helium vessels, each pressurized to about 5,500 pounds per square inch in flight. The helium is routed through the second stage’s Merlin engine, where the helium warms up and is injected into the rocket’s propellant tanks to pressurize the stage as the launcher burns fuel, keeping the tanks structurally sound.

While cryogenic helium was aboard the Falcon 9 at the time of the explosion, the mishap occurred around eight minutes before the rocket’s main engines were scheduled to ignite for the on-the-pad “static fire” test Sept. 1.

At that point in the countdown, the propellant tanks are normally not pressurized for launch.

I'm trying to understand the implications behind: "The Falcon 9 rocket’s upper stage liquid oxygen tank contains several composite helium vessels...". According to this answer "In the move to Falcon 9 v1.1 and the Merlin 1D engine they moved them into the LOX tanks on both stages. This de-cluttered the engine area a great deal." - mentioned in this answer as well - I can see that the helium tanks have been relocated inside the LOX tanks for several practical reasons including layout/arrangement and thermal management - inside the LOX tanks the temperature is much colder than ambient.

At a given maximum pressure, a lower temperature allows for more helium to be stored in the tanks, or a smaller/lighter tanks can be used for a fixed amount of helium, although I am not sure the actual reason. Boiling LOX is about 90K (only about one third of ambient absolute temperature), and SpaceX is (often/usually?) subcooling below that to pack even more LOX into the tanks.

Consider for a moment the NORS 6000 psi oxygen tanks for delivery to ISS as described in this answer. According to that article:

Working inside the high bay of the Space Station Processing Facility at Kennedy, about a dozen people perform the operations to fill a single tank following two to three days of inspections and work stand preparations. They work about 40 feet from the stand with the tank and leave it alone for a day so it can cool down after the pressurization. (my emphasis)

The team performed several fills on other tanks to make sure the process could be handled safely and performed as planned.

"There's really no other place in the world that operates up to 10,000 pounds per square inch like this in an operational environment," Bigos said. "We've had to be exceptionally cautious. It's not yet normal day-to-day operations but we're getting there."

It doesn't sound like you'd want to pressurize a 6000 psi tank submersed inside a sub-cooled LOX tank just minutes before liftoff - due to the heat generation if for no other reason. The helium tanks may or may not be smaller, but this is not a location where you'd want to be generating much heat. 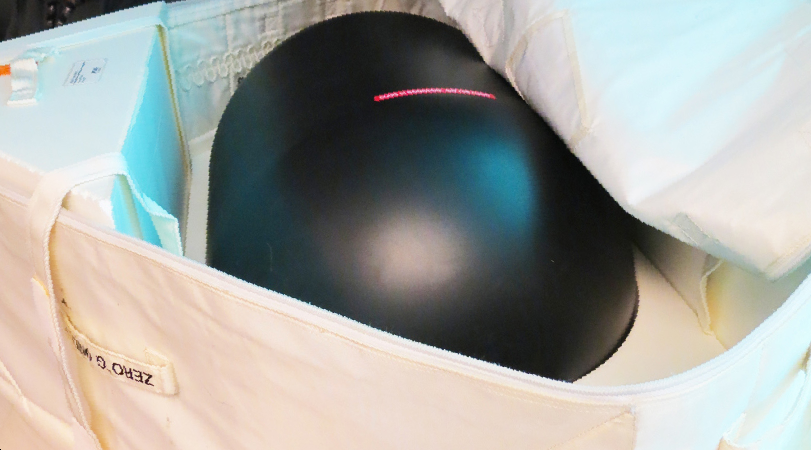 I know it's just the color and general shape, but just looking at that makes me nervous - I think it's reminding me of these for some reason.

You can always top-off a boiling LOX tank at the last minute, but I don't think you can really re-sub-cool a LOX tank inside of a rocket. Heat introduced into sub-cooled LOX will raise its temperature and the LOX will expand and its density decrease, unless there are additional "chillers" in there as well.

However in any case I now understand that the pressure of the helium is still used outside of the LOX tank and that they were moved inside for other reasons.

This countdown sequence confirms: He and LOX are loaded simultaneously at T -30 minutes.

The He is stored either as a very compressed gas (high pressure tank) at LOX temperature OR it is stored as a even colder 4K liquid (moderate pressure dewar).

The amount of He must be sufficient to expand or vaporise to fill empty LOX and fuel tanks to flight pressure. Remember that liquid He takes up a lot less volume than compressed He.

Either technique will work:

The heating of the He will provide some welcome cooling of the engine for no additional cost.

Both options gain a benefit from placement in the LOX tank.

The low temperature of the expanding He would be a potential problem in the fuel tank as it would freeze around the dewar and pipes in flight and the benefits of the cryogenic LOX temperatures are lost if the liquid He option is used.

Many of the comments in this thread point to the fact that the He in the LOX tank is liquid and this would have the most benefits from moving the He storage inside the LOX tank.

EDIT:
It is clear that the Helium in the tank is initially colder than the LOX. It also appears that the He tanks are of complex structure with an aluminium internal liner surrounded by a composite strength member. The problem during filling seems to have been the cold rather than heat. The He tanks seem to be able to handle high pressures rather than large temperature differences. It appears that they are filled with liquid He and then hold pressurised He as they heat up to LOX temperature. The slower filling technique that has been proposed may use pressurised He to fill them causing MORE heat load rather than less but perhaps avoiding the suspected solid O2 formation. https://www.geekwire.com/2017/spacex-falcon-failed-helium-tank-iridium-jan-8/

9
Is the pressurization of propellant tanks necessary for structural integrity?
7
Where are the COPVs on Falcon 9's second stage?
6
Is this explanation for the SpaceX 1-Sept-2016 anomaly plausible?
6
Supply of liquid oxygen (LOX) maintained on the ISS? Kept cold using "space", or refrigerator?
0
Is the "cryogenic helium" system in recent discussions actually LHe for cryopumping?

6
Is this explanation for the SpaceX 1-Sept-2016 anomaly plausible?
0
Is the "cryogenic helium" system in recent discussions actually LHe for cryopumping?
8
Autogenous pressurization with sub-cooled propellant
4
Liquid Helium (4.2K) sealed, then raised to sub-LOX temperature (~70K) - what is the new pressure?
10
Why would sub-cooled LOX tanks need to "topped-off" until the last minute or so?
1
Could in situ (in-rocket) evaporative cooling/refrigeration be used for methane or hydrogen cryogenic propellants?
11
Falcon-9's subcooled LOX is continuously refrigerated in-situ, what about its subcooled RP-1?
2
Is the first stage LOX tank on the Falcon 9 monocoque or semi-monocoque?