Is the pressurization of propellant tanks necessary for structural integrity?

Propellant tank pressurization is a critical aspect of liquid propellant rocket design. Many designs use high pressure helium, heated and recirculated, however the propellant gases themselves can be used - at least in the case of LH2 as explained in this answer. In the case of Falcon 9 this is mentioned here and here as I've learned in the discussion and links associated with this question.

Another question Why do pressure-fed systems have to be pressurized with helium or nitrogen? addresses the question of why the choice of pressurization gas must be helium or nitrogen, and self-pressurized by their own boil-off gas. This is a different question. I am asking about the function or purpose of the pressurization, and the relative importance of two following possibilities.

I had thought the pressure was necessary only to feed the propellants into the pumps and other plumbing of the engine fast enough, but then I saw this line in the CSMonitor article: SpaceX launch explosion traced to helium system. Now what?:

Helium is injected into fuel tanks to keep them structurally sound as the launcher burns fuel during flight. This system apparently leaked during the static test.

Thinking about it, overpressure would certainly help maintain rigidity of the tank. Anyone who's seen the "crush the can" experiment can't forget it.

Question: Is the pressurization of propellant tanks actually necessary for structural integrity? And while maintaining pressure above ambient may be necessary to prevent buckling, is further positive pressure used in the mechanical design of a rocket to substantially stiffen the structure? 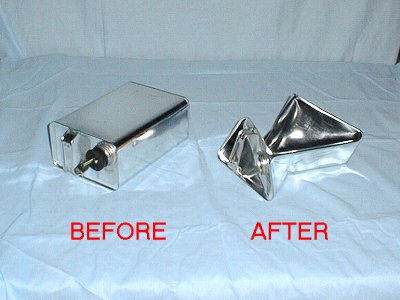 above: Image of the "Crush the Can" experiment, Ronald Lane Reese, Johns Hopkins University (1999).

Pressure stabilization is used in some rockets, and to varying degrees.

Lets take a rubber boat as an example. The tubes of the boat must be filled with air to let the boat float and carry some load. But to give the boat stability in the waves, a certain amount of pressure is needed. To much pressure inside the tubes of the boat will destroy them. The pressure has to be kept between certain limits.

The fuel tank of a rocket has to be as light as possible, a certain pressure inside will make the tank structure stiff against bending forces. Again the pressure has to be kept within the limits, too low and the tanks may be destroyed when bended (because they are made from metall, not from rubber), too high and the pressure itself destroys the tank. The pressure limits must be observed when the rocket stands at the launch with empty tanks, during the fuel loading, while the rocket is waiting for ignition and LOX and LH2 boils off, when the fuel is pumped into the combustion chamber and also when the air pressure outside decreases from sea level to vacuum. It is not the absolute pressure inside the tank that has to be maintained, it is the relative pressure to the outside.

A tank which is stable when the pressure inside is equal to the pressure outside may be build too, but it will be heavier and thus the velocity at engine shutdown will be lower. The tubes of the rubber boat demonstrate what additional stiffness is possible when inside pressure is above the lower limit.

Not the answer you're looking for? Browse other questions tagged fuel liquid-fuel high-pressure-environment or ask your own question.

1
Is fuel tank pressure structurally important?
12
Why do pressure-fed systems have to be pressurized with helium or nitrogen?
13
Why does the 2nd stage of Falcon 9 need compressed He tanks?
14
Disposition of the Oxidizer Tank in Rockets with Autogenous Pressurization
5
Why are these Falcon 9 1st stage bodies (apparently) wrapped in black plastic for transport?
11
Why are balloon tanks used by so few rocket designs?
10
How can firing a Space Shuttle OMS engine below 21 km cause its nozzle to "collapse"?
5
Problems compressing the helium tanks inside the F9 2nd stage LOX tank at the last minute?
1
Starship vs submarine hull

12
Why do pressure-fed systems have to be pressurized with helium or nitrogen?
5
Problems compressing the helium tanks inside the F9 2nd stage LOX tank at the last minute?
8
Autogenous pressurization with sub-cooled propellant
4
Liquid Helium (4.2K) sealed, then raised to sub-LOX temperature (~70K) - what is the new pressure?
6
How is it that "blow-down" propellant storage systems work in micro/ zero-gravity?
10
Why can't cryogenic oxygen and cryogenic kerosene be "stored" together?
10
Is it correct that the Saturn V RP1 tank was pressurized by high pressure helium and the LOX tanks were pressurised by oxygen?
3
Can the cryogenic expansion of liquid oxygen and liquid hydrogen be used to pump a rocket engine?