In this Astronomy SE answer to How can "Geysers" on Europa reach heights of 100km? there is discussion of the possible role of pressure at the top of Europa's ocean in the ability of the recently observed vapor plumes to reach 100 to 200 kilometers above the surface. Europa has a surface gravity of about 1.3 $m/s^2$ and it would take a velocity of 500 $m/s$ to rise ballistically to 100 kilometers for example. 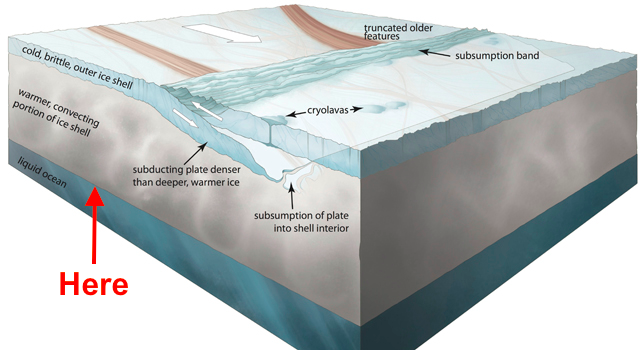 above: Diagram of Europa's Ice surface and subsurface ocean, from the JPL News feature Scientists Find Evidence of 'Diving' Tectonic Plates on Europa.

9
Can there be an atmosphere in a cave on an atmosphere-less planet?
4
A certain way to blow up Europa, what is wrong with this suggestion?
4
Why does Scott Manley say "the gravity of Europa is low enough that it's at the high end of what is possible in scuba with highly technical gear"?

10
Is the water ice in craters near the moon's poles likely to be accompanied by other volatiles?
4
Could the Martian atmosphere, in it's heyday, have caused liquid water in oceanic/sub-oceanic volumes?
4
Is there a way to achieve any kind of atmospheric flight on the moon Europa?
8
What forms of water ice have been observed and verified in the solar system?
11
If there is actual ice on the moon, why hasn't it sublimated?
23
Is there any economical way to move the water from the Martian poles to the people?
13
Are there any possible methods for keeping surface water on Mars?
1
Does the polygonal pattern on the floor of this "crater" on Mars mean that there's water ice below its surface?
4
Why does Scott Manley say "the gravity of Europa is low enough that it's at the high end of what is possible in scuba with highly technical gear"?