What forms of water ice have been observed and verified in the solar system?

The cool plot in this answer (from here) got me thinking about the more than sixteen distinct forms of ice, and how many of them have been actually seen to occur naturally in the solar system.

There are wide ranges of temperature and pressure present in the solar system and there seems to be a lot of agreement that water should be present in many of these, most frequently as ice.

If you include amorphous ice, there may be two or three forms of ice observed to occur naturally right here on (or directly above) earth - if you include the atmosphere and even though noctilucent clouds seem to suddenly be a lot more frequent now in the Anthropocene you still consider them 'natural' in as much as any effect on the Earth due to life processes is natural (e.g. the appearance of atmospheric oxygen).

So just for example, are there measurements that can look at comets and say "yep, that's probably Ice $n$!" (where $n$ is the kind of ice)?

Do different ices have any electromagnetic signatures - visible, infrared, microwave - that allows one to deduce the type of ice that might be there?

Or other physical differences that could be detected in some way?

OSIRIS-REx will return a bit of a comet to Earth, although by the time it collects its sample the surface of Benu will probably be warm enough that any water ice that might be present on or just below the surface somehow will be hexagonal Ice I, and of course the sample's toasty return to Earth via re-entry has a maximum sample temperature specced at +75 °C, this discussion of water ice phases says

Subjected to higher pressures and varying temperatures, ice can form in 16 separate known phases. With care, all these phases except ice X can be recovered at ambient pressure and low temperature in metastable form.

so maybe some day, we'll see different forms of ice returned to Earth in specially designed capsules, or even see them first hand on an exploration mission.

The only form of ice that we see naturally in bulk on Earth is Ice I, all within the sub-h variety. There's no place on Earth that gets cold enough for any other form--but that's not necessarily true for the rest of the solar system.

Unfortunately for this question, there is nowhere in the solar system that we could ever find any type of ice that depends on high pressure. The best option for that would be deep under the surface of Europa, obscured by the surface ice and the (possible) liquid ocean under the surface, but the maximum pressure under Europa's ice is around 7 mega-pascals (Many thanks to @Innovine for calculating this), so other forms of ice would not form there. High-pressure situations simply do not occur on the surface of any planet. And high-pressure situations tend to have higher temperatures, so that restricts other forms of ice.

So yes, there may be pockets of other forms of ice in our solar system. 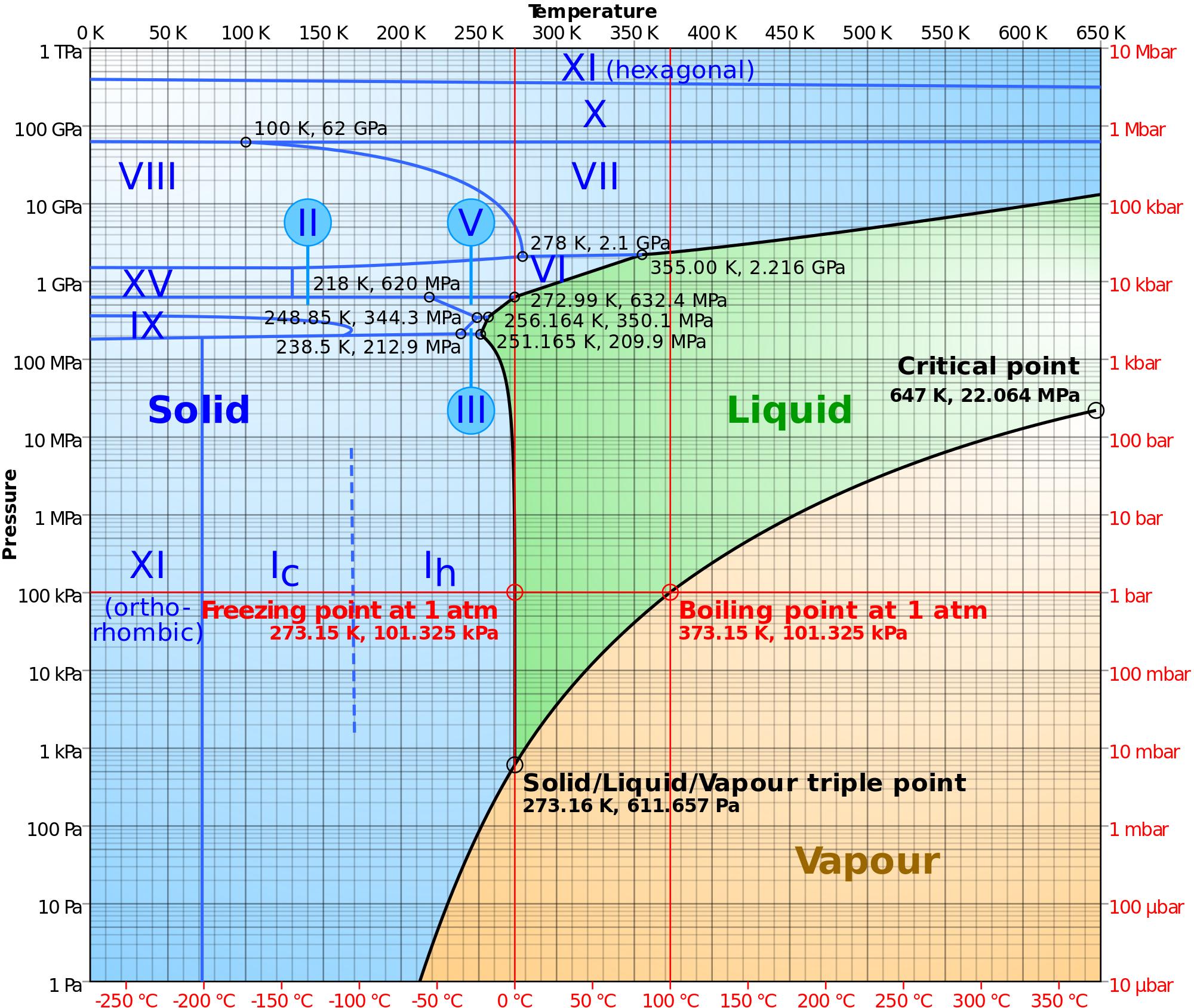 above: Phase diagram of water from here

The most likely types of ice that will be found in the solar system are Ice I sub-c, or ice XI. These forms of ice occur at lower pressure, and at temperatures that are relatively easy to achieve in our solar system. And indeed, ice XI is present on the surface of the Moon, and on Hydra (one of the moons of Pluto). Ice XI is detected because it absorbs infrared light differently from the absorption profile of Ice I--the differences are discussed in Amorphous and Crystalline H2O-Ice, by Rachel M. E. Mastrapa (the article is behind a paywall).

Actually, Ice VII has been discovered in diamonds on Earth. The water is first trapped in the diamond as the latter is formed deep in the mantle. Then when the diamond cools at the surface its rigid lattice retains the high pressure in the interior enabling the water to reach a combination of temperature and pressure where it forms Ice VII. The presence of water in the deep mantle discovered in this way has significant implications for our models of heat transfer and tectonics within Earth and may even impact the prediction of earthquakes.

The discovery was published on 09-Mar-2018 in Science Ice-VII inclusions in diamonds: Evidence for aqueous fluid in Earth’s deep mantle 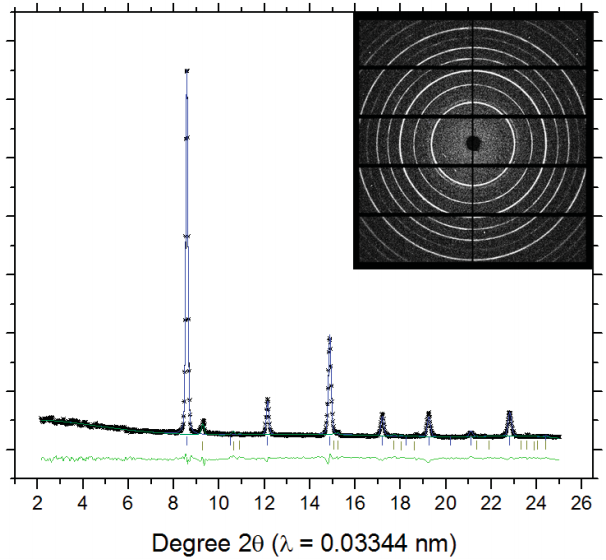 Fig. 1. Diffraction pattern of ice-VII in diamond M57666 from Orapa. Black crosses are data points; the Rietveld refinement based on this pattern of the type material (blue curve) converged to a weighted profile refinement parameter Rwp of 5.72% with a profile refinement parameter Rp of 4.57% and with c2 = 1.71 for 1398 observations. The structure factor–based refinement parameter RF was 4.0% (see table S3). The green line indicates the residual of fit. Blue tick marks denote symmetry-allowed reflections of ice-VII; olive tick marks denote allowed reflections of (Fe,Ni,C). (Fe,Ni,C) contributes 0.75 ± 0.05 volume percent to the pattern. The equation of state (27) allows estimation of the current pressure of this inclusion of ice-VII as 9.2 ± 1.6 GPa. The inset is a diffraction image of ice-VII. A diffraction image of ice-free diamond ~20 mm afar was used as a background image. Remaining single-crystal reflections are from the hosting diamond.

Where, and how, else might high pressure ice phases be found? Europa, mentioned in another answer, is not a good candidate because it is not all that icy; its ice layer is too thin to generate the needed high pressures (and we know of no processes similar to the formation of diamond-borne Ice VII on Earth). Ganymede, Callisto, Titan and Triton are the large moons with thick enough ice/water layers to make bulk high pressure ice phases a realistic possibility. This article explores the possibilities of using seismic measurements to identify phase structures on icy moons, for example suggesting that an Ice VI layer could be detected beneath a liquid water layer. Different ice phases would be distinguished by their higher densities and thus higher wave propagation velocities versus the ordinary stuff now (January 2019) on the ground in Chicago. Such ice/water structural analysis is motivated by the prospect of underground oceans supporting life and how the presence or absence of ocean-bottom ice phases would impact this possibility. So ... Stay tuned.

Not the answer you're looking for? Browse other questions tagged water comet measurement sample-return ice or ask your own question.

12
Boiling ponds and pools on Mars?
9
How will Bennu's volatile compounds stay cool and unmodified by the heat of re-entry (OSIRIS-REx)?
10
How hard is the hardest ice in the solar system? Is it in Pluto's ice mountains?
2
How is the presence of water detected on celestial bodies?
2
Asteroid Catalog

26
How to explore subsurface oceans (cheaply)?
14
What about gathering water ice from Saturn's rings?
6
Where do ice giants contain ice?
3
Why would bringing samples from Mars back to Earth be a “civilization-level changing capability”?
4
What are the technologies that can identify, validate, and quantify water-rich locations on Mars?
5
What kinds of instruments do you need to detect whether liquid water/ice is on a planet?
7
What precautions are planned to prevent samples returned from Mars crashing and releasing organisms on Earth?
5
Choosing a specific region to live on Mars, how important will the degree of dust there be, compared with the availability of water?
10
How hard is the hardest ice in the solar system? Is it in Pluto's ice mountains?