In this way this engine will work and the propellant (iron balls) will never be reduced.

I have a question that suppose if the iron balls could reduce its velocity with itself and hit with electromagnet with low velocity then this engine will move or not?

Suppose the iron ball is expelling with 5 meter/second speed from Gun system and is hitting the electromagnet or a wall with 2 meter /second velocity then this device should work or not?

Furthermore I would like to inform you that we will use ferrofluid (magnetic fluid) to reduce the velocity of these Iron balls. These iron balls will be filled up with this magnetic fluid and at the time of expelling this fluid will be in solid state but once expelling from the gun system it will convert into liquid form to reduce the velocity of iron balls. In this way this iron ball will reduce its velocity with itself due to ferro liquid. 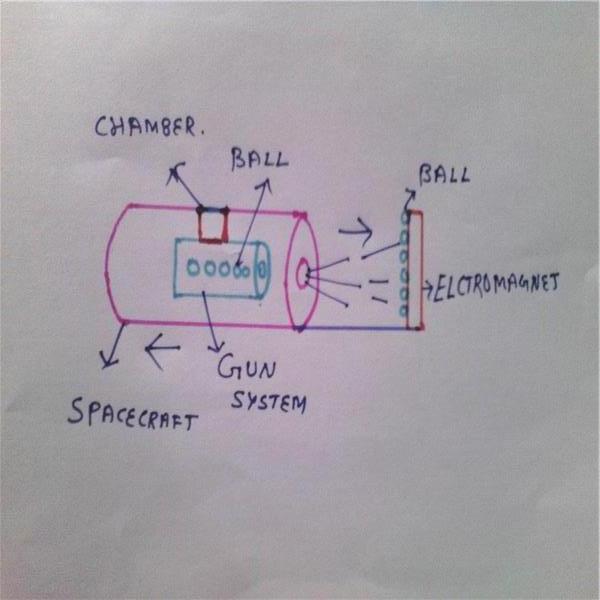 As a rule of thumb: if you think you invented either a way to generate infinite energy or infinite propellant: you are wrong. 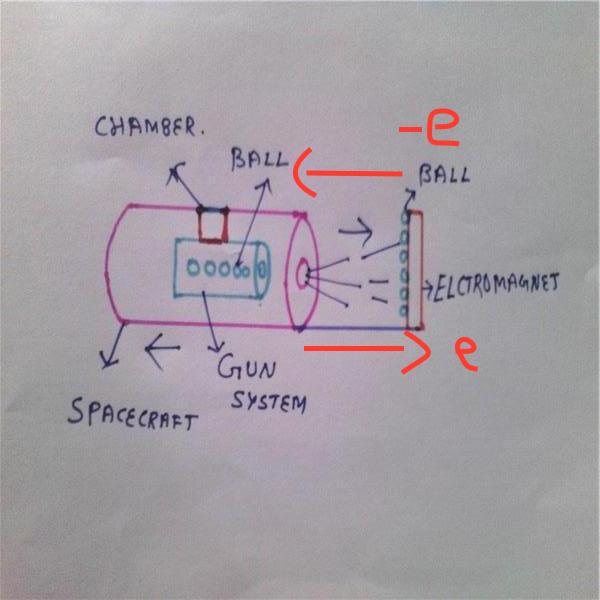 If the magnet or liquid are attached to the main craft you achieved a final velocity change of 0.

If it is not attached to you craft, the propellant is not the bullets, it's the liquid/magnet. Which is now moving away from your craft.

To quote TARS in Interstellar: "Newton's third law: the only way humans have ever figured out of getting somewhere is to leave something behind."

Everyone has this idea at some point, and every time it doesn't work. However, you came to the right place if you want to learn. Antzi explained it very well, but I think there's something deeper to be said: You can never cheat physics.

If you tied a long spool of string to your bullets, firing them quickly and reeling them in slowly might seem like it would work - But it doesn't. Physics doesn't make rounding errors, so the momentum I gain from firing at a high speed is precisely counteracted by slowly stopping them.

"But I'm using magnets, not string." True, but have you ever held a magnet near metal? You'll notice that the magnet is being pulled towards something ferrous just as much as said ferrous thing is being pulled towards it. On their own, the magnet and object gain velocity towards eachother, but the combined magnet-object system (Your gun) has a net velocity change of zero.

"Alright, What if I use gravity to pull the projectiles back in." Again, no. Every object has gravity proportional to its mass, your projectiles included. As your ship pulls them back in, the projectiles are pulling the ship aswell. Long and short, You can't sidestep the issue by changing forces.

However, your idea of using a gun for propulsion isn't entirely without merit. The magnet/self-replenishing-fuel-source idea is, but not the gun. If you ditch the magnet and replace your 5m/s pea shooter with a 40km/s Railgun, you have a truly amazing exhaust velocity, and thus a very efficient propulsion system.

Not the answer you're looking for? Browse other questions tagged propulsion energy or ask your own question.

7
What upgrades does the Merlin 1D need to increase its time between overhauls to 1000 hours?
2
Usages of electric propulsion versus chemical engines
9
Do any realistic rocket systems use different substances for propellant and fuel?
11
Is it possible to use zinc powder as a NTR propellant?
2
Could a CubeSat be propelled by this low-tech electromagnetic propulsion system?
6
How is it that "blow-down" propellant storage systems work in micro/ zero-gravity?
2
For a DAWN-like solar-electric deep space mission, would using propellant particles much heavier than xenon atoms be beneficial?
2
What are all the kinds of electric propulsion that don't qualify as ion propulsion in standard spaceflight lingo?