Did Rosetta improve on models of non-gravitational effects on comet 67P's orbit?

Question: Since the presence of the Rosetta spacecraft near comet 67P allowed for a detailed mass measurement, extremely precise position and velocity determinations, and physcal measurement and imaging of ejecta from the comet as it passed through perihelion, did Rosetta improve on models of non-gravitational effects on comet 67P's orbit?

The calculation of the orbits of comets can be more difficult than those of most asteroids for a number of reasons. Some comets have such highly eccentric orbits that aphelion is too far for the comet to be observed continuously, or the period is so long that only one pass has been observed and a period can not be calculated, or it passes so close to the sun that it's orbit is highly modified. However comet 67P/Churyumov–Gerasimenko currently has a period of only about 6.4 years a perihelion/aphelion of 1.2 AU and 5.7 AU respectively. While it's orbit is within a so called "frost line" it remains further from the sun than the Earth's orbit.

In this answer I plot some data from a recent NASA JPL Horizons ephemeris for comet 67P. The current default solution soln ref.= JPL#K084/25, data arc: 1995-07-03 to 2016-05-30 appears to use Marsden coefficients to model non-gravitational forces on the comet. Brian . Marsden was a British astronomer who contributed greatly to the field of cometary orbits. (See also here and here.) While exact modeling of non-gravitational forces on comets would be extremely complex, he introduced a simple empirical parameterization that provides a framework to discuss the magnitude and potential effects of these forces on the orbits of comets.

I've reproduced these here to illustrate the basic idea. There are further considerations including a delay term and effects of rotation. However with this parameterization it is possible to discuss and at least get a handle on non-gravitational effects without a detailed physical model. These effects might the Yarkovsky and Poynting-Robertson effects, and of course recoil from material energetically ejected from the comet, especially as it approaches the sun and is heated.

The parameters $A_1,A_2,A_3$ in model can be used to express effects from physical models of comets, but they can also be used as fitting parameters to improve orbital solutions for comets based on observational data. 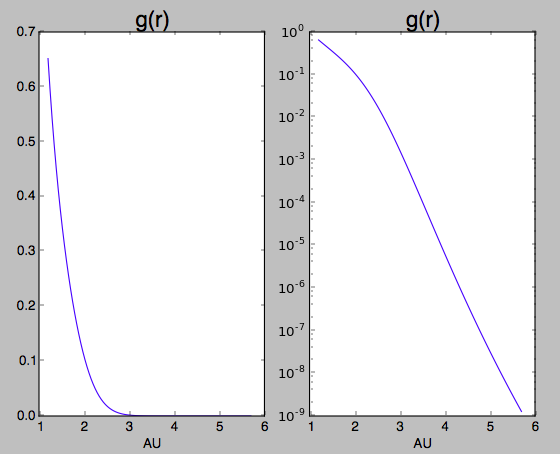 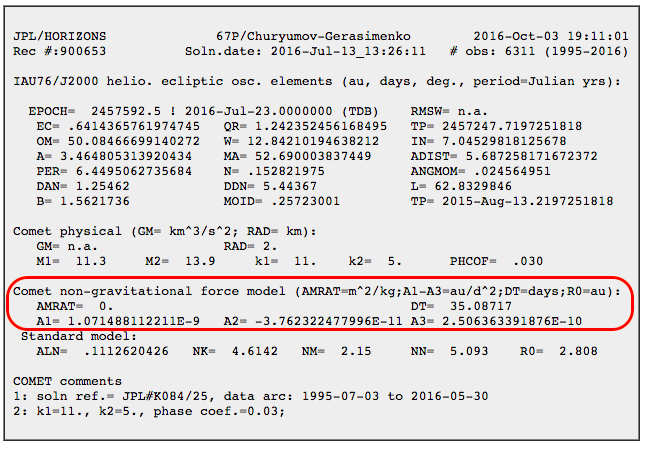 above: Example of the non-gravitational parameters used in the most recent JPL Horizons ephemeris for comet 67P. The coefficients have units of $AU/day^2$. For a comparison, the gravitational acceleration at a distance of 1.2 $AU$ is about 0.0041 $m/s^2$ or about 2.1E-04 $AU/day^2$. This suggests that the non-gravitational forces used here have a parts-per-million effect per orbit which will become substantial over a large number of orbits.

12
Why does Starman/Roadster have radial acceleration?
11
Besides retarded gravitation, anything else to worry about when calculating MU69's orbit from scratch?
4
How will OSIRIS-REx scan and characterise the near-earth asteroid Bennu?
5
Could Rosetta find its way back to Earth?
4
Outgassing as a viable explanation of Oumuamua acceleration excess
3
Can we watch the object move towards the Moon and hit it this week at home? Will there be live telescope feeds?
4
How well can the orbits of Jupiter Trojans to be visited by Lucy be predicted?
3
Planets positions determination
3
Where will the DSCOVR mission Falcon 9 2nd stage rocket body end up?
2
Would the Yarkovsky effect ever be faster than a solar sail from a 1 AU orbit to the Sun?
See more linked questions

15
Will Rosetta have to adjust its orbit around Chury due to the comet's coma and tails?
9
What is the smallest body that has sufficient gravity for another body to orbit it?
10
Did we expect Comet 67P/Churyumov-Gerasimenko to be dusty?
2
How close can Rosetta come to the 67P/Churyumov-Gerasimenko comet?
3
Why are JPL using this expression to emulate Schwarzschild orbits?
2
Would the Yarkovsky effect ever be faster than a solar sail from a 1 AU orbit to the Sun?
6
Can an orbit rotate around a non-orthogonal axis?
6
Which of the 2 delta-v calculations for a Mercury orbit insertion from LEO is right and which is wrong?