This question and its answers explain the basic theory behind GPS. I particularly like the second answer by @jah138. Using jah138's notation, GPS satellites provide extremely accurate $x_i$, $y_i$, and $z_i$. Meanwhile, $c$ and $\rho_i$ are both known with extreme accuracy. $\Delta t$ is known from the cell phone. With multiple satellites, you end up with a system of equations, and can solve for $x_u$, $y_u$, and $z_u$, make relativistic corrections, blah blah blah, you have your answer.

Where I get held up on is that $\Delta t$ is not known with extreme accuracy since (as I understand, and this is where I think I'm wrong) it comes from my relatively cheap and inaccurate cell phone. GPS obviously works which I believe means it requires a very accurate knowledge of $\Delta t$. How does a cell phone get extremely accurate $\Delta t$ without use of an on board atomic clock?

Actually, the accuracy of a quartz clock is sufficient, since only very short periods are measured by the GPS receiver.

The following is a simple sketch on how GPS works: Three satellites A, B, C send out a signal at the same time, containing their position. 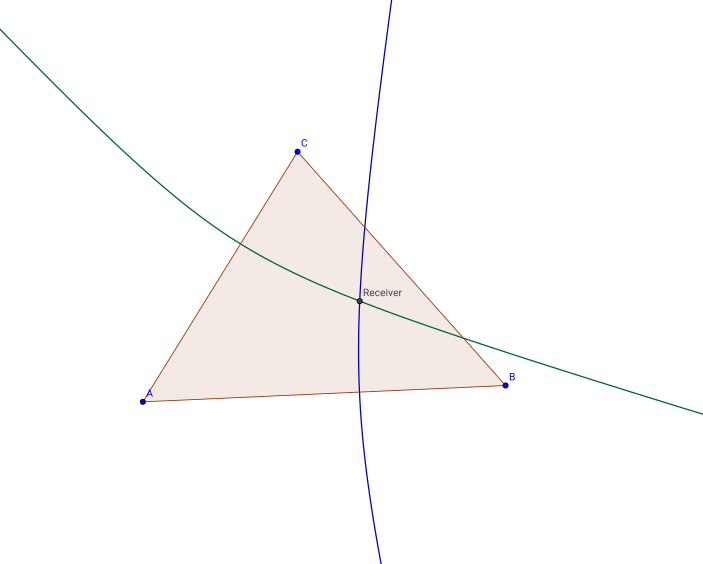 Now, a quartz clock isn't as precise as an atomic clock. It is said that it can drift up to 30s per month, i.e. the clock is too slow/fast by a factor of 0.00001. If the delay between the signals of two satellites is about 1 second, this gives an error of 300000km/s*0.00001s = 3km.
But GPS satellites don't send just a single "ping" each second, they continuously send a data stream including time stamp. From the time stamp, a coarse delay between the signals is calculated. Looking at the waveform of the signals, the single bits have a duration of about 1ms, so it is possible to determine the delay between two signals with a precision of better than 1ms.

Since there are many other uncertainties e.g. due to weather, the receiver uses more satellites than necessary to calculate the most probable position. In my sketch, only timing A<->B and A<->C was used, if we use B<->C, too, we get three possible positions, and the truth is somewhere in the middle: 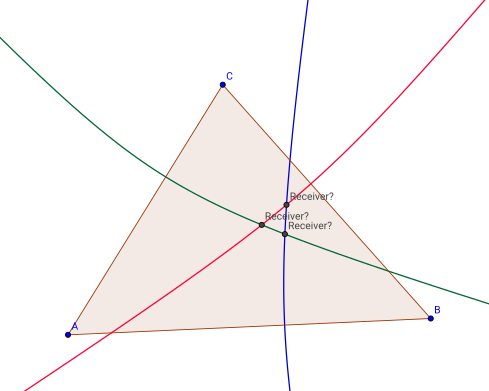 As you said yourself, you get a system of equations from which the location can be calculated. Here the Δt consists of the difference between the time of the signal being sent at the satellite and the time of arrival. Now it is important that if we have 2 satellites next to each other in space, the Δt should be the same.

This requires that the 2 clocks in the satellites should be equal, hence the atomic clocks which are synchronized from earth. But the clock in the receiver is in both cases the same, so even if your phone is of by 2 hours, the Δt will still be the same in both cases.

Not the answer you're looking for? Browse other questions tagged gps accuracy or ask your own question.

37
How does GPS receiver synchronize time with GPS satellites?

9
Does GPS work at ISS?
37
How does GPS receiver synchronize time with GPS satellites?
11
How does GPS work exactly?
5
How does GPS module gets time even before a fix?
8
Would a GPS receiver with an onboard atomic clock only need 3 satellites to determine position?
2
Does GPS spoofing ever come from space? How are spoofings usually detected?
3
Could a satellite use a Miniature Atomic Clock (MAC) to provide GPS services?