While watching a launch of an Atlas V, I couldn't help but notice that the boosters were positioned asymmetrically. There was one booster on one side of the rocket, and two boosters on the other side.

Further research revealed that the positioning for the booster was intentional. Which is odd, because off-setting the boosters will give more thrust to one side of the rocket, and in turn, end in a disaster!

But that didn't happen during the launch. The rocket managed to fly perfectly upwards! How did they manage to do that? Why did they even position the boosters that way! Does it hold some sort of benefit? And if so, why don't people use that more and more often?

The main engine on the Atlas, as with most orbital launchers, is gimballed such that it can direct thrust to offset the imbalanced thrust from the boosters (or any other disturbance). Atlas uses only as many boosters as it needs for a given payload -- from zero to 5 -- and some of those configurations are asymmetrical. It looks especially odd using only a single booster, as in this video:

Another approach would be to discard the odd numbered configurations altogether and go to 2, 4, 6, 8 boosters. That means a higher manufacturing cost and more dead weight (more attachment points, less efficient boosters).

In both cases there's a tradeoff between manufacturing cost and complexity, and rocket efficiency (performance loss due to non-optimal configurations). Apparently the tradeoff was favorable for the current 1-5 booster configuration. 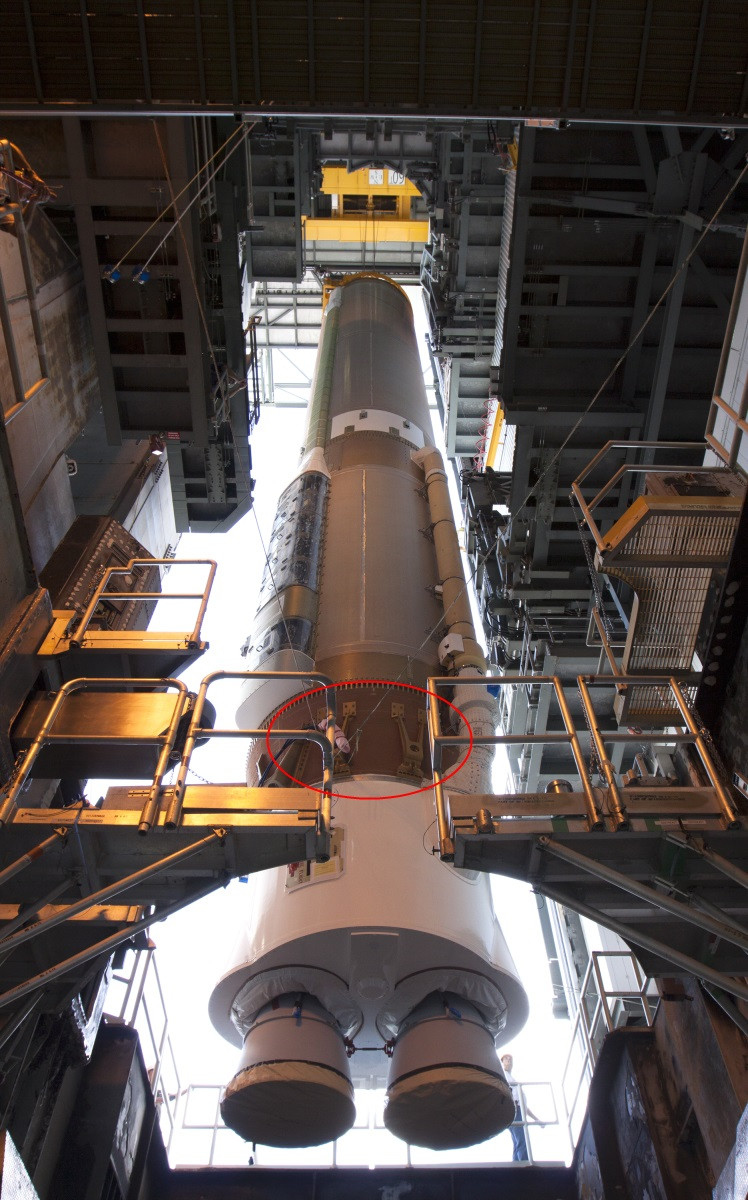 This photo also shows there's lots of places around the circumference of the stage where you can't attach boosters due to LOX lines or electronics attached to the outside. This is why e.g. the 4-booster variant is asymmetrical. Apparently, the Common Core Booster was not initially designed to be used with solid boosters, and when they had to be added later they didn't want to rearrange the rest of the stage.

Being designed for government contracts in an era with very little competition, it's feasible they didn't want to spend money wringing out the last bit of performance from the design.

The Delta rocket started out with separate versions of the aft end for different numbers solid rocket boosters attached. Eventually McDonnell Douglas standardized, introducing the Universal Boattail Thor (UBT) with with a full complement of nine attach points regardless of how many solid boosters were to be flown on a mission. The positions for the boosters were not evenly spaced on the UBT, though unlike for some Atlas V configurations the aggregate thrust was always symmetrical.

As I'm sure was the case with Atlas V, MDAC's decision to use the same aft end regardless of the number of solid boosters flown on a mission was founded in engineering analysis which traded performance increments against program cost increments, and took consideration of reliability intangibles such as that the more versions of something you fly, the more chance for problems and the less flights each version gets compared to if there is just a single one... diminishing the demonstrated reliability for any of the various configurations relative to only a single type.

Finally, it appears from inspection (i.e. I don't specifically know, but I do have a structural engineering background) that these "attach fittings" are structural elements which carry loads for the frustum. That would allow the frustum and associated internal structure to be made lighter, so the attach fittings would thus not be deadweight even if no booster is present at a given position. More like that they are external "ribs", which then do double-duty when there is a booster attached.

Not the answer you're looking for? Browse other questions tagged design booster atlas-v or ask your own question.

20
Why were Delta II SRBs asymmetrically mounted?
7
Are side boosters sometimes angled even if they are symmetrically arranged?

28
For a 3 booster rocket, why do they start with igniting the starboard booster, followed by the center and port?
8
Why do rockets separate from both its strap-on booster cores simultaneously instead of one at a time? (Delta IV Heavy, Falcon Heavy, Angara)
12
How many 1st stage boosters will SpaceX settle for, for its LEO/GTO fleet?
19
What would the challenges be in developing a Falcon Heavy with three or four strap-on boosters?
10
Why aren't airbreathing SRBs a thing?
7
Are side boosters sometimes angled even if they are symmetrically arranged?
6
ULA just launched a very asymmetric Atlas V 511. Why does its plume look so asymmetric... after SRB jettison?