If so what is the reason ?

The main reason is it's a lot easier. It requires an enormous delta v to change the inclination of the spacecraft such that it would be perpendicular to the plane of the solar system. Furthermore, there isn't that much of interest beyond the ecliptic plane.

The only reason to send a spacecraft perpendicular is to somehow study the poles of the Sun, or to orbit an object significantly outside of the ecliptic plane. This has been done once, with the Ulysses spacecraft. It achieved the required delta v by a carefully planned flyby of Jupiter. This flyby allowed it to have an inclination of 80 degrees around the sun. There aren't many objects worth visiting outside of the Ecliptic plane, so there just hasn't been many missions to make the change.

Because of the slightly fuzzy understanding of planes demonstrated in this question and HyperAnthony's similar question, I want to clear up the matter of planes.

First, keep in mind that planes are two-dimensional. They have zero thickness.

The ecliptic plane is the plane on which the Earth's orbit is located.

Generally, most objects are going to be inclined (at an angle away from) these planes. In the case of planets, it is significantly so. Here is a handy chart from Wikipedia that shows the inclinations of each of the planets: 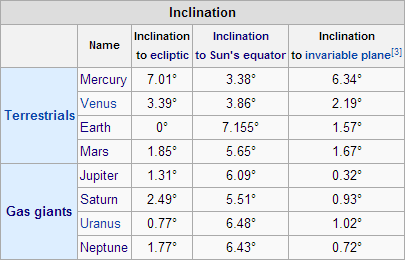 Since all of our destinations in the solar system (and even in the galaxy) are inclined from the ecliptic plane, travel to those destinations involves plane transfer (changing the inclination of the space craft relative to the ecliptic).

The greater the change in inclination, the greater delta v required.

To change inclination to perpendicular to the invariable plane would require "an enormous delta v", as PearsonArtPhoto said in his answer. Just how much would this be? Well, for a simple plane change (where the orbit size stays the same), $\Delta V = 2V_i * sin (\theta / 2)$. $V_i$ is the initial velocity, and $\theta$ is the angle change. That's nearly 1.4 times the initial velocity increase in velocity to transfer from the ecliptic plane to a plane perpendicular to the invariable plane. And that's assuming you don't have to change the size of your orbit (which you will).

In addition to previous points above, I offer the following. Firstly, the dV required to reach the outer planets, or leave the SS, can be partly picked up by repeated gravity assists from the planets (see Rosetta's flight plan with which it can catch a comet). To do this you have to stay in the planes of the fly-by planets. Second, the dV to get a 'polar' or perpendicular orbit can be reduced if either the launch trajectory is north/south or if your path has a fly-by by a pole of another planet. The Voyagers did this after their last planet encounter. (V2 is at about 55deg declination). It can take very little dV to bend an outbound trajectory to meet a planet on a polar orbit approach. By the way, launching into a terrestrial polar orbit uses more energy than an equatorial one because you can't take advantage of the angular velocity the rocket has sitting on the pad.

Why is inclination low?

It costs a lot of energy to change the orbital inclination significantly. That said, NASA has done so with at least two probes, by use of gravity slingshots. Plans for use of a Venus encounter to put a probe into solar polar orbit were public discussion in the 80's, but I have no idea if they are still on the drawing board; the early 90's Ulysses probe was slingshot off of Jupiter.

Most of our probes are being sent to other planets in the system - deviation from the ecliptic plane is thus not in our interest; Voyager 1 being sent off was more to do with getting the desired encounters at Saturn. The joint NASA/ESA Ulysses probe used a jupiter assist to enter a fairly large 80° inclined orbit, specifically to get views of the solar poles. In theory, an encounter with Mars or Venus could do the same, and this was proposed for Pioneer H, but NASA instead put that craft on display in the Smithsonian.

Any orbit intending to avoid the "clutter" of the ecliptic plane still crosses it twice an orbit, and still has risks; further the higher the inclination, the greater the crossing velocity and more severe the potential impact energy. Thus, while it reduces the overall chances of collisions slightly, it increases the risk from each encounter greatly. Further still, there are a lot of small bodies in highly inclined orbits already, and the coronal mass ejection risk isn't reduced either, so the only reasons to do so are for research that requires a highly inclined orbit anyway.

Space telescopes like Gaia and the James Webb will not study planets, but they are still placed in the ecliptic plane of the planets (and Earth's moon) in order to take advantage of their gravity. Another potential "resource" in the ecliptic is shadow from the Sun, and for a radio telescope on the far side of the Moon, a radio shadow from Earth.

Reasons not to stay in the ecliptic would be to study the Sun's poles, like the Ulussey probe did. Oort cloud and Kuiper belt objects can be very inclined and could require missions way outside of the ecliptic. Even such missions would take advantage of gravity assist by planets before they leave the ecliptic.

A space telescope which would not be placed in the ecliptic would be a radio telescope placed so far out that it can use the Sun as a gravitational lens. That's at least 550 AU away, about 14 times the distance to Neptune. And maybe twice that because of the Sun's disturbing corona. It would get great magnification only in the direction of the Sun, so it would be sent on a course away from the object one would like to study. Maybe a specific star or the supermassive black hole at the center of the Milky Way. On an interstellar scale, the plane of the planets in the Solar system becomes irrelevant.

Not the answer you're looking for? Browse other questions tagged orbital-mechanics probe orbit-selection or ask your own question.

29
Why are probes that tend to explore outer system always launched to go outwards instead of straight upwards or downwards?
18
Would leaving the ecliptic plane offer any benefit to interstellar travel?
8
What are the advantages and disadvantages of sending a telescope into deep space?
1
Can we get different images of the Milky Way? Or solar system?

18
Are there any (Lagrange) points in the Solar System in perpetual shade?
8
What are the practical limitations of gravitational assists?
28
Is there any way to find and track Pioneer 10, 11, and Voyager 1, 2?
12
What significance did Pioneer 10 & 11 have?
6
Are there any private space probes presently active?
8
Is there any plan to send balloon like probes to gas giants to explore interior of gas giants?
4
Probes on a Solar System Escape Trajectory
1
Can we get different images of the Milky Way? Or solar system?