Why did the Apollo program become a MULTIPLE human landing program?

How did JFK's promise of landing one man on the Moon grow into a whole series of landings of 12 men on 7 missions, with even more planned? Given the motivation of the program, shouldn't Apollo have been discontinued after the successful Apollo 11?

How did this idea of continuous exploration of the Moon emerge as a de facto space policy for a decade or so? Especially by using the Apollo architecture which was optimized for going there once. Being uneconomical for a lasting human presence on the Moon. It seems to make neither engineering nor political sense.

Most of the cost in such a program is in the capital expenditures, the R&D, infrastructure, etc. Launching an additional Apollo mission is much less costly than a single mission would be. See the inflation adjusted chart below for how the cost of Apollo varied with time. Note that the cost for Apollo peaked in 1968, the cost went down dramatically once the only cost was building additional missions. 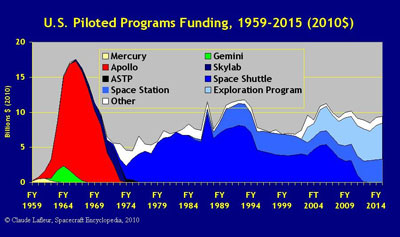 In addition, multiple landings were required for a number of missions:

In addition, NASA wished to accomplish more science than they could do for a single mission. They wanted to learn as much as they could, to take advantage of it as you said.

Given that there had to be backup missions planned, it only made sense to have those missions in progress. The lead time for building a new rocket was on the order of years, including the training of the crew. Without having a backup mission or two in line, it could have been as long as a year before another rocket could have been built to accomplish the mission. And once you have spent the money, you might as well launch the rocket.

After Apollo 11's mission was successful, many people questioned the continuing use of the Apollo program, and over time the public stopped watching the missions, stopped following the progress, and they almost became routine. Despite the fact that there was more hardware available, the Apollo program was cancelled, in large part due to what you mentioned (The goal was to send a single mission there)

Short answer: it was always intended as a multiple landing program. The Apollo program existed before Kennedy's moon speech. NASA was committed to space exploration, and moon landings -- and more than two and a half hours of science on the moon -- were an essential and obvious part of that.

Kennedy's challenge set a goal date, but that didn't have any particular formal or legal weight -- and even less so after Kennedy's death. There was no more reason to stop space exploration on July 25, 1969 than there was on November 23, 1963.

Not the answer you're looking for? Browse other questions tagged the-moon nasa apollo-program history policy or ask your own question.

4
Why did NASA sent people to the Moon more than once?

21
Why didn't the Apollo program do an uncrewed landing/ascent rehearsal?
21
Why did the Apollo Lunar Module have four landing legs?
2
What is the case for human presence on the Moon?
4
Why did Mercury use multiple CAPCOMs while Apollo did not?
8
Did Apollo astronauts play on the Moon their pre-recorded music?
11
What is the “mistake” that caused Doug Loverro to resign as NASA's Human SpaceflightChief so shortly before DM-2?
17
Was “Apollo” an acronym for “America’s Program for Orbiting Lunar and Landing Operations”?
3
Technical historical books covering the Apollo-Saturn program
4
How was an emergency landing site at Diego Garcia used during the Apollo program?