Mapping the moon: how to use the Lunar Reconnaissance Orbiter (LRO) image data? 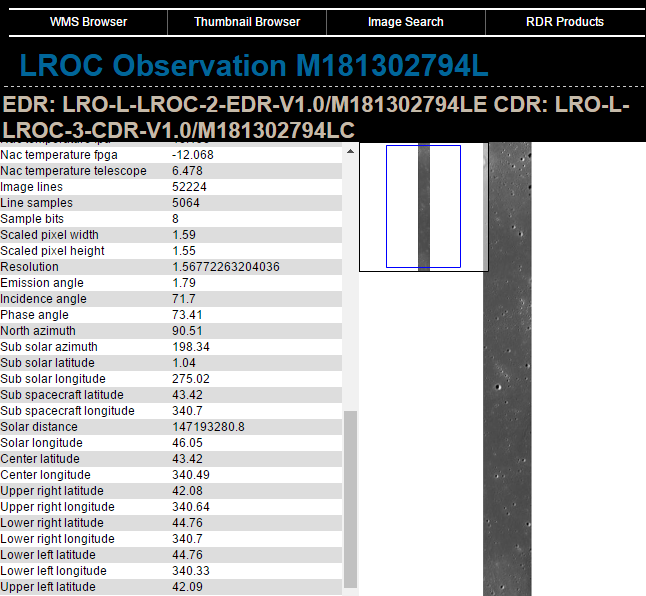 tl;dr Those numbers are meters per pixel. But you have to be careful because they are scans along the spacecraft orbit with the moon rotating underneath, so x and y are skewed.

This answer will get you started. The LRO is an amazing spacecraft with a wide variety of instruments to map the moon's surface by a number of characteristics as well as simultaneous laser ranging information for LRO-Earth and LRO-Moon paths improving lunar gravity models. There is a very helpful one page overview in The Lunar Reconnaissance Orbiter and the New Moon: Mission Highlights and Two More Years of Science From Lunar Orbit! by project scientist John Keller. You are interested in the LROC/NAC (LRO Camera / Narrow-Angle Cameras) 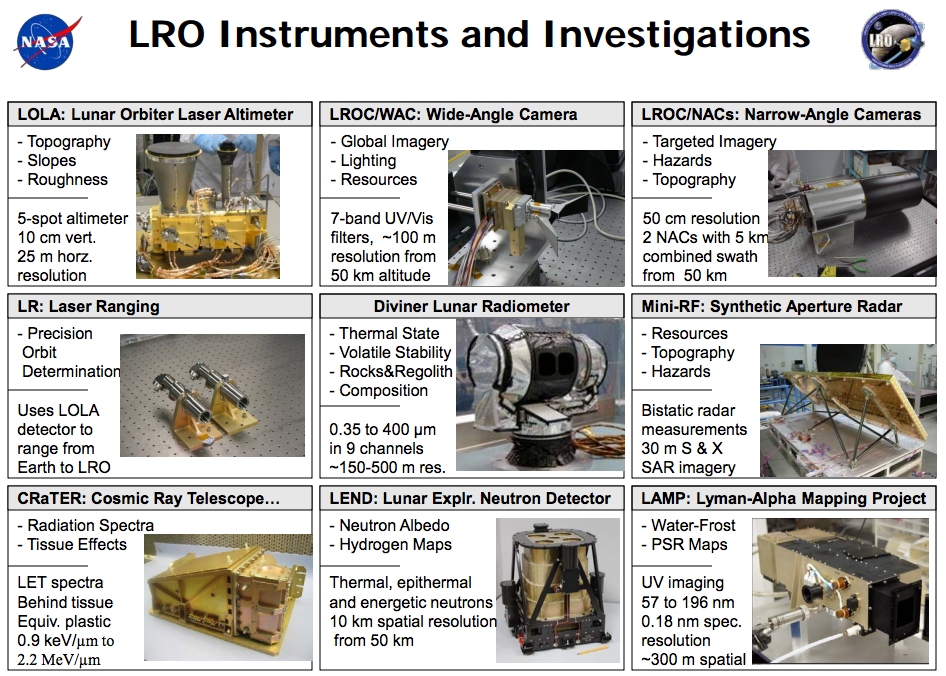 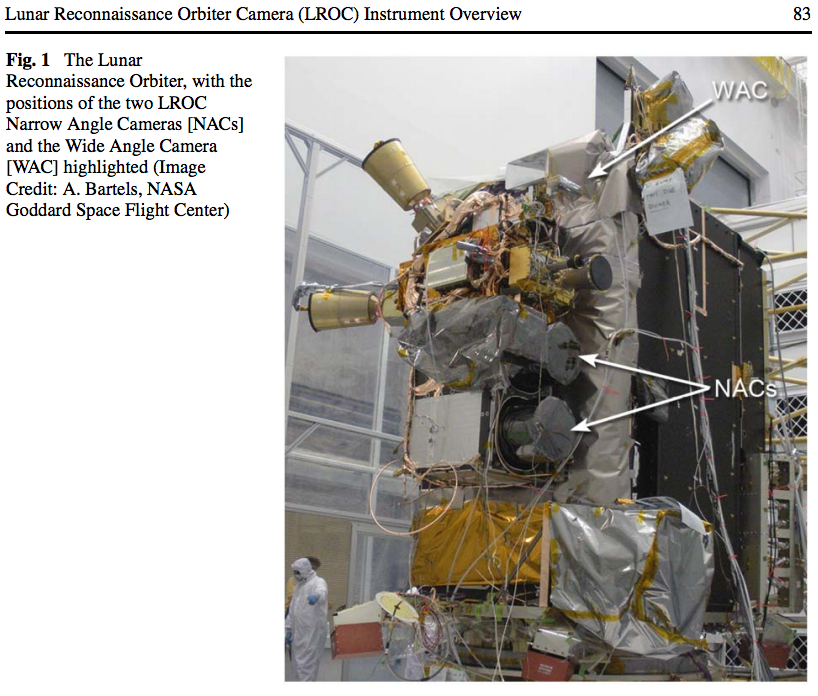 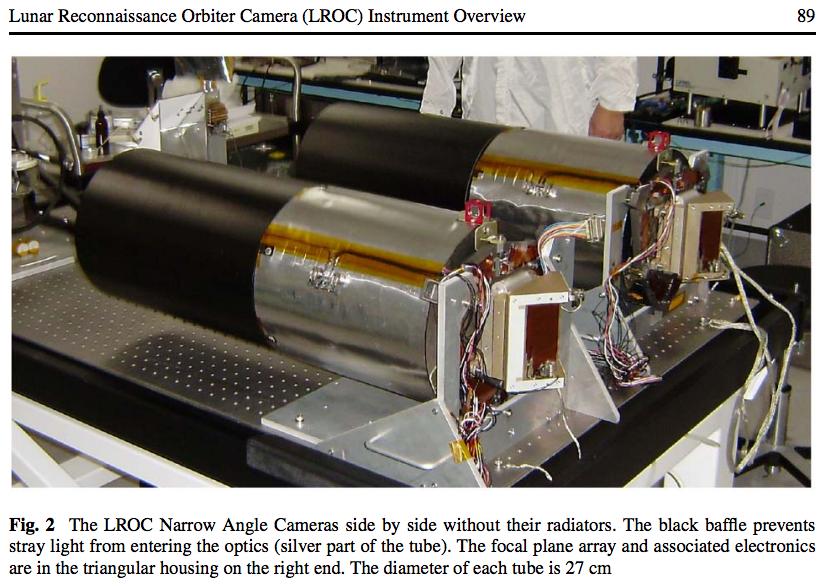 There are two essentially identical narrow angle cameras, named "L" and "R" in the data arcives. Each camera uses a roughly 5000 pixel by 1 pixel CDD, and the LRO's orbits in the "X" direction continiously scans like a FAX machine or flatbed scanner. The FOV of the cameras slightly overlap in the middle, but extend to the left and right of the centerlin thus the "L" and "R" designations in the image data archives as well.

Much of the data is taken in a roughly polar orbit, including the data in January 2012 you've mentioned, so the ~5000 pixels of a given camera in this case are nearly parallel to lines of lunar latitude.

From that we can plot the approximate border of the image: 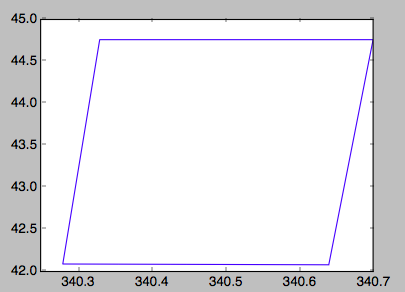 The skewing is due to some combination of the inclination orbit rotation of the moon under the spacecraft while it scans. Remember to consider the skewing when trying to use these images!

The width is about $340.7-340.33\approx0.37$ degrees in latitude. The data below show that the camera is looking nearly straight down.

The width of the field is roughly 0.37 degrees of longitude, correcting that for the latitude, the width on the surface assuming small angles is:

So of course the scales in the metadata are going to be more reliable than my approximation, and you should use those numbers because a correct calculation would be much more complex! But my calculations serves as a) a sanity check (did I pass?) and b) an instructive illustration of what's actually going on.

Here is a quicker way to get at the scale, but it doesn't clue you in on the skewing. The table below shows that the LEFT camera has 10.00 microradians per pixel. Multiply that by the distance from LRO to the imaging location on the moon of 158.79 kilometers and you get...

1.59 meters/pixel! Same as the pixel scaling given.

For fun, you can go to https://lrostk.gsfc.nasa.gov/preview.cgi and see a real-time animation of what LRO is scanning right now! 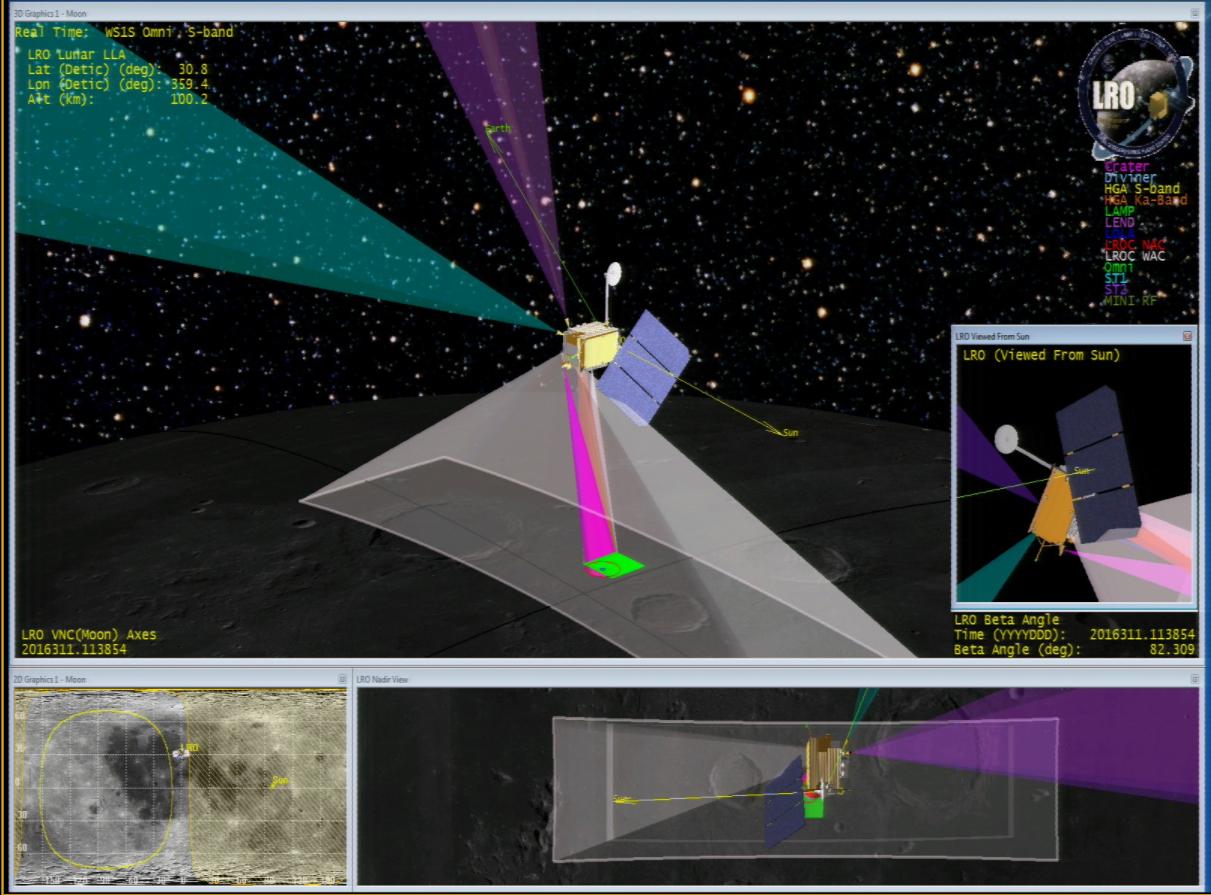 Not the answer you're looking for? Browse other questions tagged the-moon imaging mapping raw-data lro or ask your own question.

1
The "live" 3D webpage showing LRO's activity is down, is this temporary?

9
How do I properly use the LROC Image Search tool?
12
Is there a map or list of all the lava tube skylights the LRO has detected on the Moon?
1
How could the recently explained "glints" seen by DSCOVR appear so compact considering the finite size of the sun?
3
How can ICEYE-X1 capture 2D high resolution SAR images in "tens of seconds"?
6
Comparison of Lunar Orbiters image resolution after 4 decades?
1
How to extract coordinates of an LROC Image?
3
Wide angle camera of Lunar Reconnaissance Orbiter, were rectangular lenses used?
1
Can I retrieve longitude of Lunar Reconnaissance Orbiter around the Moon by POST method (URL)?
5
Where to find the full reflectance map of the Moon?
1
Lunar Reconnaissance Orbiter (LRO) stereographic projection transformation equations issues