Is 45 km unusually close to pass the ISS and deploy a microsatellite without warning?

Eight years ago, on September 27, 2008, the Shenzhou-7 carying three taikonauts deployed the microsatellite Banxing-1 for testing maneuvers and external imaging. A few hours later at 15:07 UTC the pair passed the ISS with only about 45 kilometers between Shenzhou-7 and the ISS. Banxing-1 is described in detail here.

On September 27 at 3:07 p.m. Greenwich Mean Time, the Shenzhou-7 ship passed within 45 kilometers of the International Space Station, according to the U.S. Strategic Command...

No one has offered a full explanation for why Beijing would do this. But China's track record of using all of its Shenzhou missions since 1999 for dual military-civil missions justifies speculation that it might have been part of a test of a new antisatellite missile technology. About four hours before Shenzhou's point of closest approach to the space station, Shenzhou-7 started one of its main missions: the launching of a 40-kilogram maneuvering microsatellite called BanXing-1 or BX-1...

It seems that after it was deployed, Banxing-1 was out of control during this close pass. The intended purpose was to remain and maneuver close to Shenzhou-7 and photograph it. Luckily it was drifting on the opposite side from the ISS.

Chinese state television reported on October 2 that "after the satellite was released by the Shenzhou-7 last weekend, it quickly started drifting away from its intended trajectory." NASA has not responded to questions about the BX-1 ventured closer to the space station than the Shenzhou incident. Neither has Washington.

Is that unusually close to the ISS to deploy and test a new satellite's propulsion and maneuvering without warning? The relative velocity seems to be about 3 kilometers per second!

Below are plots made from the TLEs. I've rotated the data into the frame of the ISS (black dot at the origin) with the thin black line pointing Earthwards (Nadir). Distances in kilometers. Blue/solid = Shenzhou-7, red/dashed = Banxing-1. 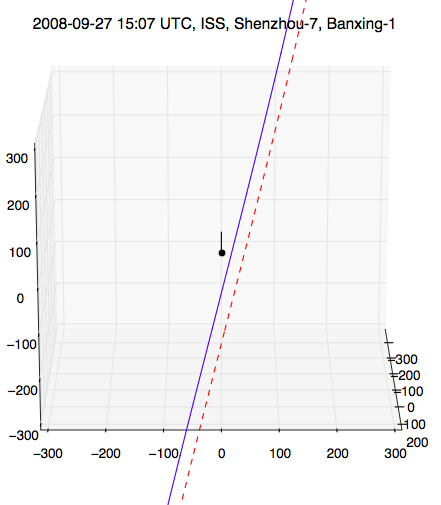 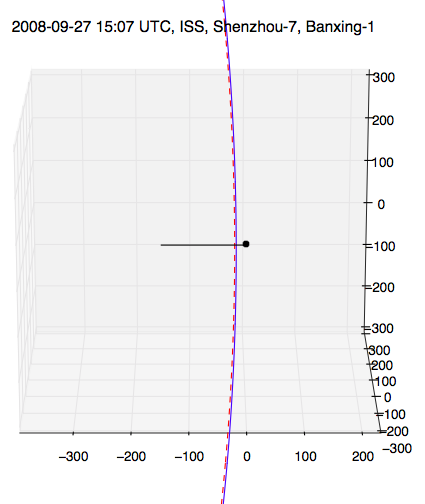 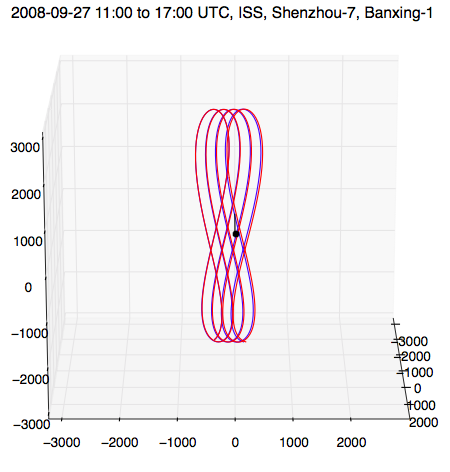 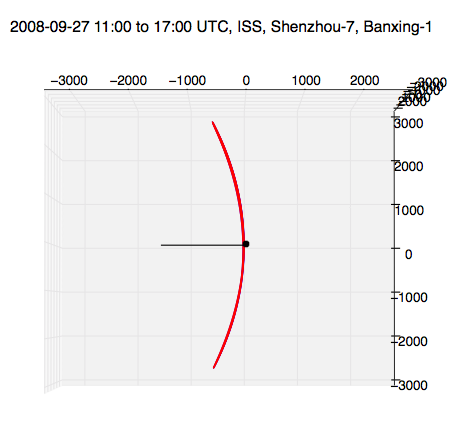 I know nothing of this specific incident, but the generic ISS COLA (COLlision Avoidance) "box" is sized such that a body passing at 45 km could be inside the COLA box, but wouldn't trigger the "notification" rule. 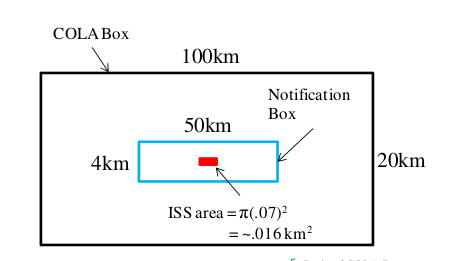 Not the answer you're looking for? Browse other questions tagged iss orbital-maneuver safety collision-avoidance or ask your own question.

6
Has an astronaut ever seen another object in LEO pass by that wasn't mission-related?
8
Where/how did the CRS-10 Dragon capsule “wait” before the 2nd, successful docking attempt?
7
ISS - Tiangong 2 minimum safe distance
-7
What regulations, agreements, or other forces can help mitigate “PrankSats”?
3
Why did the Chinese put the Tiangong-2 so high?

18
Do astronauts aboard the International Space Station (ISS) actually use their legs?
37
Why doesn't ISS pass over the polar regions?
2
What are the steps between rocket launch and docking to the ISS?
36
Why is China still not invited to the ISS? (Or, why do certain countries not get invited/rejected to work on the ISS?)
54
Is 75 meters an exceptionally close distance for two satellites to pass at >6,000 m/s?
5
Does the ISS have any ability to detect or sense unexpected/unscheduled objects in close proximity?
21
Is it safe to see the ISS with the naked eye?
4
Was this large pieces of “space junk” just released from the ISS in the “nadir and retrograde” direction?
17
How close is the ISS to a closed system, in terms of carbon, hydrogen, and oxygen?
5
Any official size for the ISS pizza box?