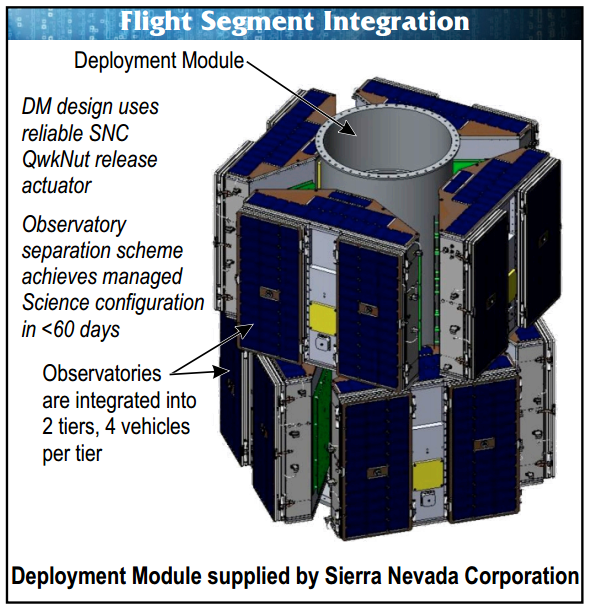 Short version: you have to read the Algorithm Theoretical Basis Documents (ATBD), conveniently collected at https://clasp-research.engin.umich.edu/missions/cygnss/data-products.php . All of them. They are too long (143 pages in total, by my count) to do them justice here, but I will try to give you a whirlwind tour.

At the most basic, the satellite instruments measure raw detector counts, which are just numbers on some arbitrary and unknown scale. In NASA jargon, that is known as "Level 0" data. The Level 1A ATBD takes six pages to explain how to turn the raw counts into received power, measured in Watts. This is by far the simplest of the ATBDs, so it makes a good place to start.

The Delay Doppler Mapping Instrument on CYGNSS is a combination of a GPS receiver with a sort of microwave radiometer, which measures the total amount of energy deposited in each collector bin in some time interval. The raw values are called counts by convention. This is partly because they're integers, because that simplifies the on-orbit signal processing; and partly because if the incident radiation were perfectly monochromatic and the detector were perfectly efficient, energy deposited would be proportional to photon count, because photon energy is Planck's constant times frequency. Keep in mind, radio signals are all just photons, as infrared and ultraviolet and visible light and X-rays and gamma rays are all just photons, but you need very different designs and materials to make detectors sensitive to each kind.

CYGNSS's raw detector counts are linearly proportional to energy collected in each bin during each snapshot in time. Dividing by time length gives the average power, but not all of that power is the desired GPS signal. Some of it is noise collected by the antenna from the portion of the Earth in view; this is mainly thermal emission, because the radiation spectrum of a blackbody at 300 K extends well into the microwave. Some of it is noise generated within the receiver, due to thermal emission from the spacecraft itself. These sources must be continuously calibrated, so their estimated contributions can be subtracted out, and the result multiplied by the correct, experimentally-determined conversion factor.

The Level 1B ATBD takes sixteen pages to explain how to use knowledge of the orbits of both the CYGNSS spacecraft and the GPS spacecraft to locate where the specular (mirror-like) reflection is centered, and use that to turn power in Watts into Radar Cross Section (RCS) in square meters. This involves estimating a wide variety of possible errors, such as inconsistencies in the GPS satellite transmission power, unusually large temperature variation in the receiver's low-noise amplifier (LNA), and lots of other stuff.

The Level 2A ATBD, as linked by @danipascual, takes ninety-six pages to explain how to convert calibrated RCS into wind speed. This involves integrals galore, and the consideration of another dozen or more sources of noise, some of which can be calibrated out, but the rest you just have to live with (though you can make a good try at estimating their typical size, and people also try various ways to flag cases when they have grown unusually large).

The Level 2B ATBD takes nineteen pages to explain how to convert calibrated RCS into Mean Square Slope (MSS), their chosen metric for surface roughness. This involves knowledge of the local weather in the area of reflection, because the models they use for connecting RCS to MSS depend on the sea surface salinity and temperature, which themselves come from analysis of the data derived from other kinds of weather satellites.

The Level 3 ATBD takes six pages to explain how to turn the Level 2 products, each of which is obtained from just one spacecraft, into a single, global, gridded data product combining measurements from all eight CYGNSS satellites.

I have never been involved with the CYGNSS project, but once upon a time I was a NASA contractor on a different weather science project, and what I did all day was execute some of the procedures described in our Level 2 ATBD (ours was 243 pages), and sometimes discuss parts of them with their creators. If you want to understand how it all is really done, the Algorithm Theoretical Basis Documents are the authoritative source.

CYGNSS uses Delay Doppler Reflectometry to record ocean choppyness. What this means is, essentially, the satellites listen to GPS signals bounce off the ocean surface and look at how much the signal is scattered and delayed. The data is published at different levels, and the algorithms between the levels aren't necessarily public. However, the level 0 data has pretty usable data as is; for example, this article shows an example of how just simple signal-to-noise ratio (listed as 'signal strength') gives an obvious difference between water and land.

Each satellite gets a few (3-4, normally) spectral tracks on the ocean where GPS signals bounce off; those are the spots we can measure. With 8 satellites in orbit we can get pretty good coverage of the east coast of the US with pretty fast turnaround times for data; the satellites are talked to nominally once per day but special circumstances (like hurricanes) occasionally call for more frequent downlinks.

Other answers, of course, covered all of this well, but I feel obligated to post an answer since I was a Flight Controller for CYGNSS :)

I am not sure what you mean by "ocean roughness", but the CYGNSS products are wind speed and Mean Square Slope (MSS). You can read the retrieval algorithms here (pag 47) and here (page 5) respectively.

Not the answer you're looking for? Browse other questions tagged earth-observation gps scientific-data smallsat cygnss or ask your own question.

26
What is the purpose of the rotating dish antenna on the ISS
4
Rocket to launch 8 cubesat to LEO at an equidistant distance
8
What goes into the planning and execution of the deployment of groups of LEO satellites?
3
Delay-Doppler maps in space science
3
How many existing satellites have a continuously varying orbit because of human design decisions?
2
Has "parasitic radar" ever been used in space?
3
CYGNSS launch - a lot of unpowered coasting
1
How will NASA's TROPICS cubesats be inserted into their three orbital planes and proper phasings?
0
Why did some of the optical sensors of CYGNSS satellites suffer UV and radiation-induced loss of sensitivity? Was this unexpected? If so, why?

6
Did the NASA PhoneSat actually try to use the GPS from the phone itself?
2
How can ISRO's RISAT satellites search for the lost IAF AN-32?
1
How can GEDI be considered a carbon-monitoring instrument?
5
How can satellites measure the energy of individual ~100 MeV gamma ray photons with reasonable certainty
3
How will the Ionospheric Connection Explorer (ICON)'s Michelson interferometer measure wind speed?
1
Which spacecraft can see plants "glow" during photosynthesis during the day, and what wavelength does it use?
3
When going to Mars, how do you measure exact distances to determine course corrections?