Do only Eagles walk on the moon?

If so other then attributes of birth (country of origin, etc), are there any other accomplishment they all share?

No, they were not all Eagle Scouts. While at least forty astronauts earned the rank as a youth Eagle scouts, in fact only two Apollo moonwalkers did: Neil Armstrong and Charles Duke.

But most were Boy Scouts, with only James Irwin not being a scout at all. The ranks earned by the 12 moonwalkers (sorted by rank, then by Apollo mission):

The Bald Eagle is however the USA's National Emblem and often depicted on badges, pins, buttons, insignia, and other emblems, so chances are they all wore on their person "The Eagle" in one form or another while walking on the Moon.

And the first Lunar Module (LM) to ever have landed on the lunar surface during the Apollo 11 mission, with Neil Armstrong and Edwin "Buzz" Aldrin onboard being the first and the second moonwalkers, has been named Eagle. Perhaps the most memorable mention of the module's name is described in Wikipedia as:

Armstrong acknowledged Aldrin's completion of the post landing checklist with "Engine arm is off," before responding to Duke with the words, "Houston, Tranquility Base here. The Eagle has landed." Armstrong's unrehearsed[24] change of call sign from "Eagle" to "Tranquility Base" emphasized to listeners that landing was complete and successful. Duke mispronounced his reply as he expressed the relief at Mission Control: "Roger, Twan-- Tranquility, we copy you on the ground. You got a bunch of guys about to turn blue. We're breathing again. Thanks a lot.

Additionally, the Apollo 11 insignia, designed by Michael Collins, the Command Module (CM) pilot of that mission, also depicted an eagle with an olive branch in its talons: 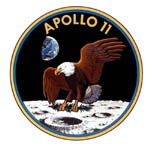 So in the strictest sense of the title of your question alone, it might have as well been that so far, only Eagles have walked on the Moon.

Not the answer you're looking for? Browse other questions tagged the-moon astronauts apollo-program myth-busting or ask your own question.

23
Is true that Armstrong was not designated as first to walk on the moon?
0
How would one go about proving humans have really been to outer space?
15
Who was the first person to touch the moon rocks?
11
What is Astronaut Sunita Williams wearing on their wrist?
3
Did NASA remove four major photographic atlases of the Moon from its Technical Report Server? Gone for good, or just hype?
5
Was lunar module "pilot" Harrison Schmitt legally a "pilot" at the time?
8
Did Apollo astronauts play on the Moon their pre-recorded music?
7
What was the nature of the communication problems during Apollo 11's Eagle's descent? How were other antennas selected?