How will GOES-R simultaneously point some instruments down at Earth and others sunward?

GOES-R is scheduled to launch soon and put in geostationary orbit over North America for high bandwidth continuous monitoring of Earth, with only 120 minutes per year interruptions caused by stationkeeping. It will simultaneously monitor the sun with several instruments and of course it's solar panel. The GOES-R Website describes the satellite in detail throughout many pages and links, and two images are shown below.

I assume that over the course of each day, the shaft that supports the solar pannels and sun-pointing insturments rotates 360 degrees relative to the body of the spacecraft. How do all of the wires for power from the pannels and signal and control connections for the sun-pointing instruments not get twisted up and break after a few days of continuous rotation?

Watch the video below to get a perspecive of the size. 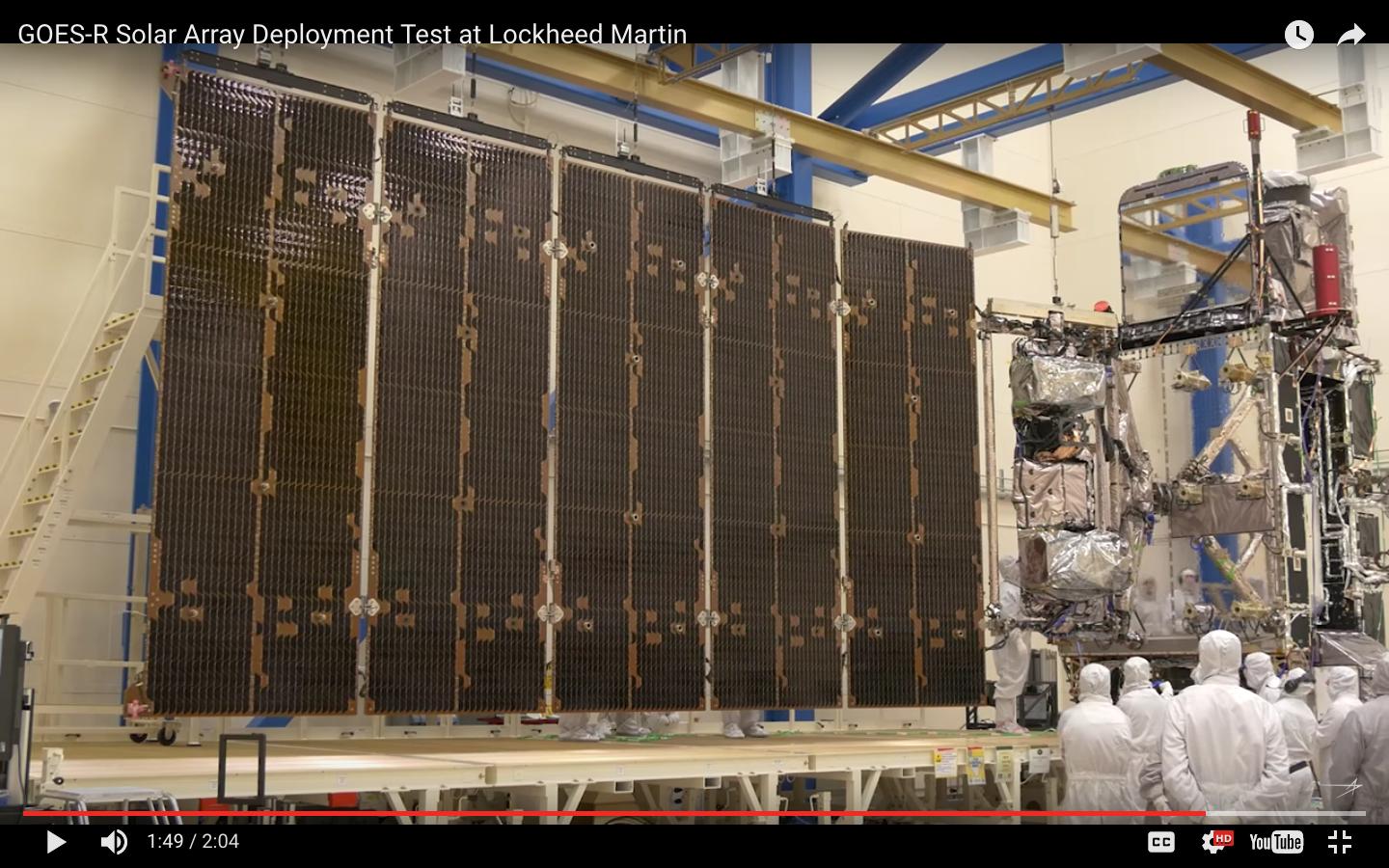 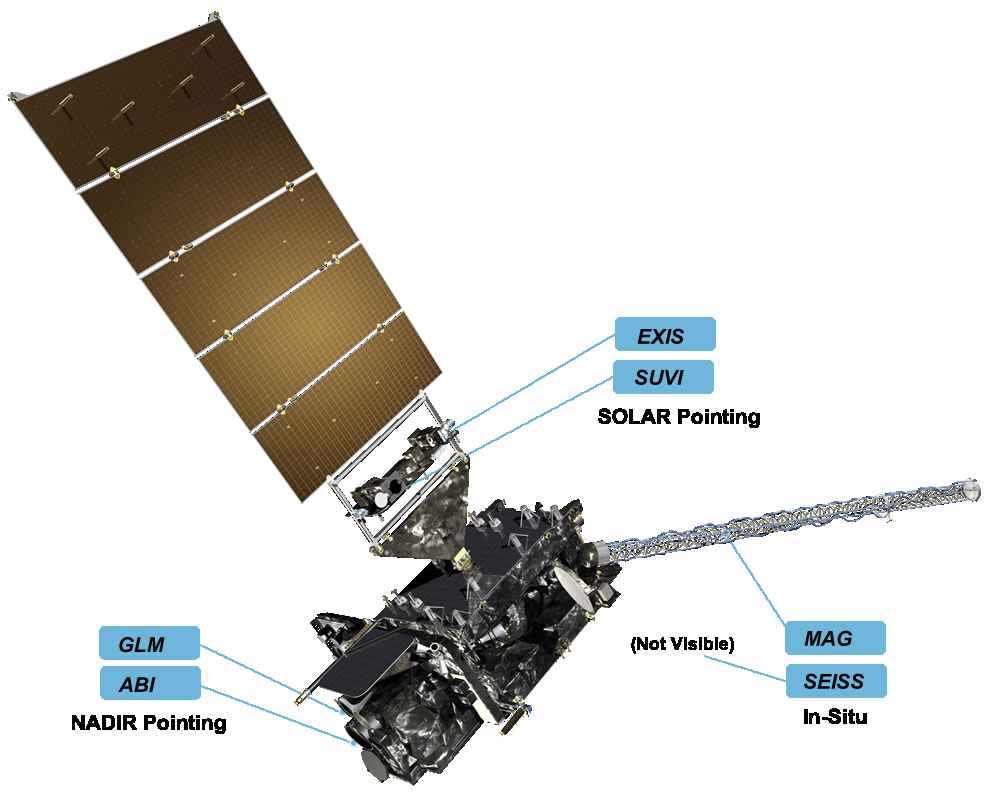 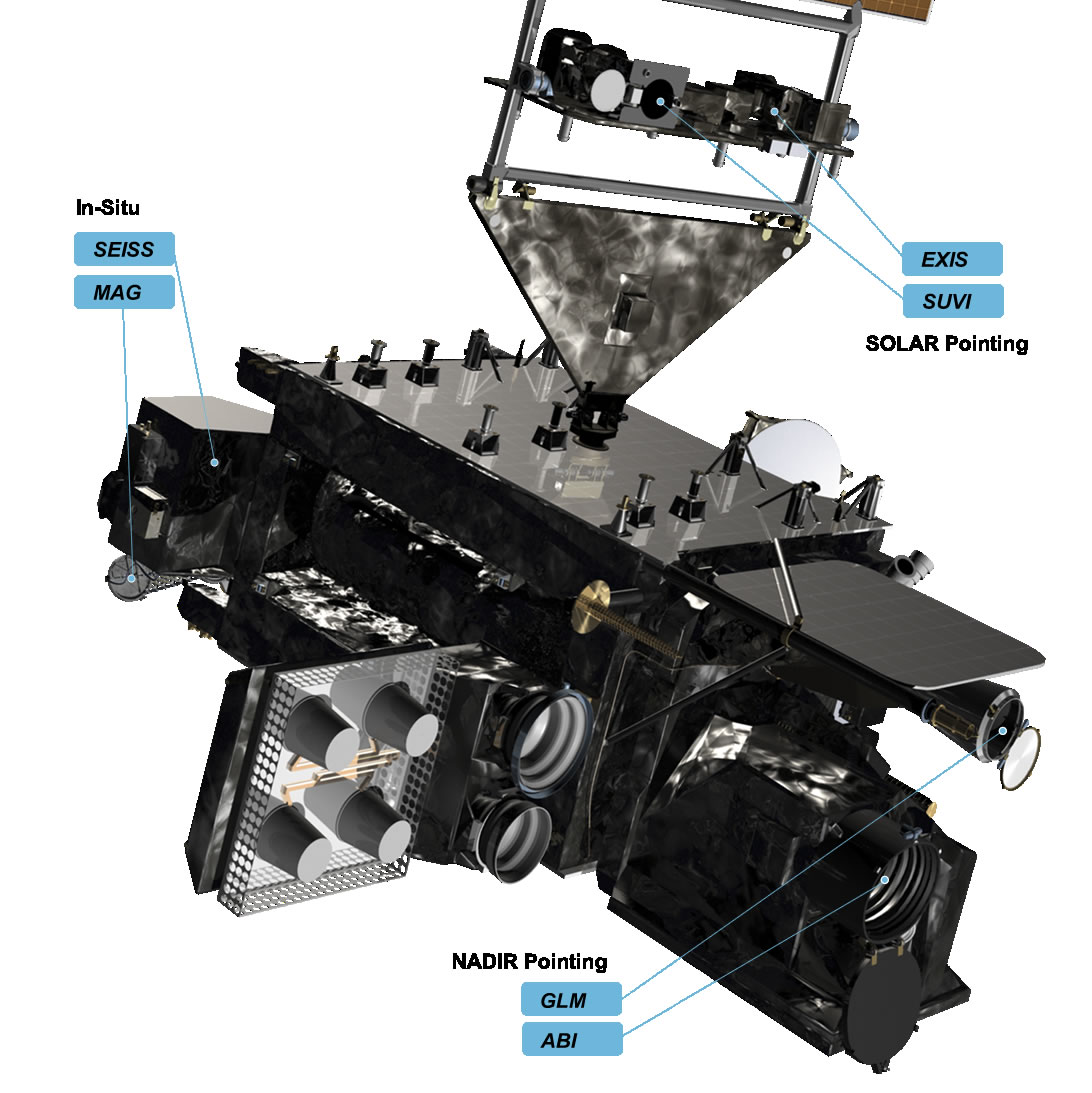 above x2: annotated illustrations of GOES-R spacecraft and its nadir-pointing and sun-pointing instruments.

Goes-R uses a Slip Ring Assembly to transfer power and communications signals from the rotating solar wing to the stationary spacecraft body. The signals going through the slip ring use the SpaceWire network protocol to minimize the number of connections.

Rolling contacts are used e.g. for the Alpha joints on the ISS (which support the large solar panels).

Slip rings can contain a large number of contacts. This example has 6 contacts, but the same type is available with 70 contacts. 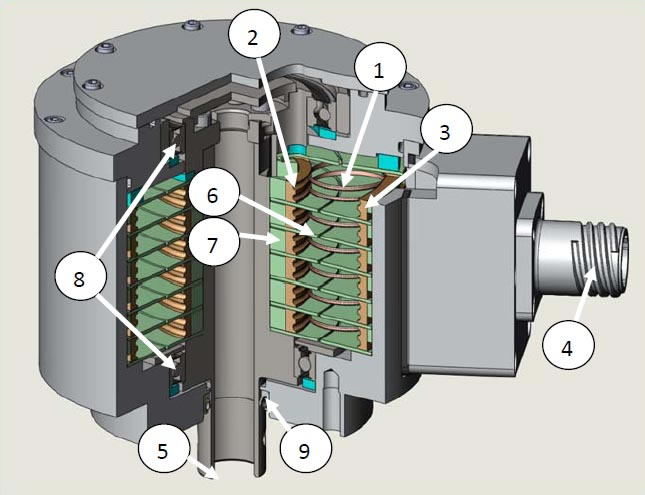 You can also get slip rings for hydraulics and radar signals (using waveguides), for example.

Slip rings suffer from electrical noise when rotating: it's very difficult to make perfect contact at all times. The circuits connected by the slip ring have to take this into account.

Slip rings have some advantages over a radio link:

The GOES-N data book is an extensive description of GOES-P's predecessor. It contains some information on the use of slip rings in that program. GOES-P uses a different design.

Not the answer you're looking for? Browse other questions tagged artificial-satellite spacecraft solar-power or ask your own question.

25
How can you make a vacuum proof rotatable seal?
5
Why was SpaceWire designed with nine wires?
8
Harpooning satellites? Is this really the best way to get them under control?
10
How do the roll-rings at the ISS work?
8
What are these very large, square panels on Inmarsat 5?
4
Can the solar panels on satellites (such as Juno) rotate?
3
What is the difference between dual-spin spacecraft and hybrid(attitude control) spacecraft?
2
Why do the solar panels on the seven Sentinel configurations look so completely different from each other?

7
Why aren't landers designed to point their solar panels and radio antennas to Sun and Earth?
9
How long will a 500 km altitude satellite spend in Earth - shade per orbit
7
How far from earth have atomic clocks (or ultra-stable oscillators) been placed and monitored?
20
Curiosity is still dirty! How will the ExoMARS Rover keep its solar panels dust-free and collecting sufficient power?
9
How are the orientations of the ISS' eight independent solar arrays optimized?
4
At what point when travelling faster and faster around the earth are you not gonna be falling back again (7km/s? 8km/s?)
4
How close will the cubesats be when numerous of them are launched simultaneously?
2
Is it possible to predict if an orbiting satellite will pass over a given point on Earth after n periods?