What would be a few challenges to build a landing strip on mars?

So we are spending a lot of money to get things landed vertically. Its a challenge, and obviously tough too.

So here is the idea. Get to mars. land over there, no need to return to earth (if no human is there) Get the bots to build a long air strip. Maybe something that can be easily made and transported there and that can be quickly put up there.

Now you can have more ships sent out there with lesser risks. What would some of the challenges in this idea, and what would make this not feasible?

UPDATE: So assume at some point we do colonize and then does it make sense to have an air strip. Or would you rather have small shuttles that can take off vertically?

UPDATE: So we have concluded that due to atmosphere thickness, it would not be enough for present aircrafts to fly. What if your aircraft was 1/3rd lighter by the use of advanced materials or carbon fibre, nylon, or something meant only for mars takeoff to space only? Is there a possibility then?

On Mars, the atmosphere is thin enough (around 1% of Earth's) that it's impractical to use aerodynamic lift during the terminal phase of landing.

Therefore, a horizontally landing craft would be much less efficient than a vertical lander.

Even for Earth-returning spacecraft, where aerodynamic lift is relatively easy to get, the mass requirements for wings and control surfaces plus their thermal protection systems are such that they are only attractive if precision landing and reusability is required -- and even then, vertical propulsive landing SpaceX style is competitive.

The problem with a landing strip on Mars would be size. Because Mars' atmosphere is so thin you'd have to be going very, very fast (several hundred mph/kph) in order to get enough lift to arrest your descent enough to land safely. At that speed touchdown would be incredibly hard on the wheels, which would most likely pop instantly - a skid makes more sense I'd guess although that's still a big materials science problem. Say you did manage to get the wheels/skid on the ground, you'd then have to slow down and stop. The air is too thin for aerodynamic braking to matter much and the gravity is low so you wouldn't get the same traction, and would need to brake much more gently - again a skid would probably work better on Mars, but in either case it's going to take much longer to work because there's less gravity.

So because of these factors a landing strip would have to be many, many miles long. The very thin atmosphere also makes controlling an airplane challenging, and because of the high speeds involved an airplane's turning radius would be huge, so you would need a very wide runway as well to compensate. So you'd need a landing strip the size of Manhattan, or even bigger, to be able to land an airplane on Mars. That would be hugely costly compared to other alternatives.

Besides the extremely thin atmosphere on Mars and construction obstacles, there are two other reasons to not build a landing strip on Mars that I can see.

Why go to the same place twice?

Mars is big. It's not as big as Earth, but there's still a whole lot of unexplored terrain that would be of interest to study. By building a landing strip, even if you can build one and it's viable in the first place (which, given the other answers so far, appears highly doubtful), you commit significant resources to a single location. Just like you can't get a good idea of what the Earth looks like by studying only Manhattan or the Mariana trench, missions have deliberately picked highly disparate landing sites at least in part precisely to study different parts of Mars to get a better idea of the planet's overall geology. 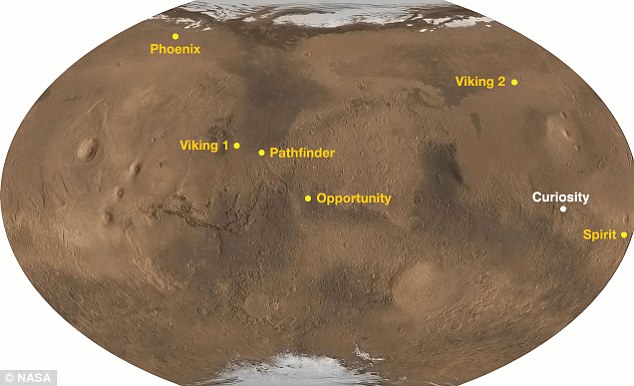 Our Mars landings just aren't precise enough for a landing strip to make sense. You are probably thinking in terms of doing this: 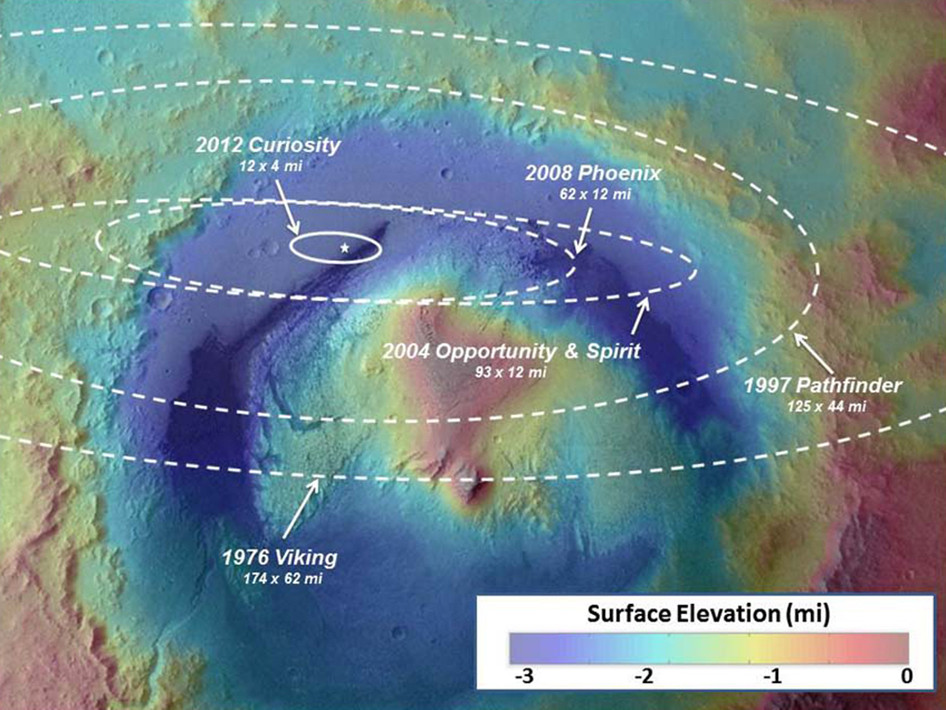 Look at that 2012 Curiosity landing. A landing ellipse of 12 x 4 miles, or 19 x 6.5 km, with touchdown 2.4 km from the centre, is far too imprecise for a landing strip to make any sense. Not only would you have to actually land on the landing strip in the first place; for a horizontal landing onto a landing strip to make any sense at all, you have to be going in just about exactly the right direction when you hit the ground, and hit very close to the correct spot on the landing strip. We aren't talking a few kilometers here; we are talking more like on the order of tens to a few hundreds of meters.

We simply aren't there yet, and I wonder if we will ever be there before we have significant human presence on Mars, at which point there's more productive things for those people to do than flatten and cover a large swath of Mars surface near their base where it is most accessible for study.

The Space Shuttle was able to do that kind of landing, but it did so on Earth (with an atmosphere hundreds of times thicker, with corresponding differences in aerobraking and lift capability), and it had significant constraints on landing. There's a reason why the deorbit burn was called a landing commitment.

Basically all the challenges of a mid-scale construction project, except done by remote control from several light minutes away, and you first need to land all the construction equipment on Mars.

The weight reduction would not be nearly as much as 2/3. Carbon fiber has about twice the yield strength for 2/3 weight compared to aluminum, so theoretically this would mean a 2/3 weight reduction. In practice buckling becomes more likely, and carbon needs a higher safety margin for safe use. If you still don’t believe me compare weight in bike frames. Good high end aluminum frames usually weighs between 2.5 and 3 pounds while carbon is between 2 and 2.4 pounds. Carbon usually uses some 5 times safety margin vs 2 for metals. (Those vary wildly but they tend to be around that.)

The difficulties would be significant after all you would need either the high wing surface area per weight or high landing speed that would be needed but I believe with proper care and lot of extra mass to make the needed structure it would be possible. Not sure why you would do that on a module with such weight penalties. The powered option would be my choice.

Something that might make more sense and contradict what people are saying is using a shuttle like shaped reentry vehicle with a small area to weight ratio. It would not have enough lift to actually land and therefore would need to have a powered landing. You would suffer a small weight penalty because of the shape versus ballistic but the advantages would be lower temperatures on reentry, lower G loads and a greater precision on landing place. it would not be able to correct gross reentry mistakes but would provide a far greater precision. And to correct the misconception presented on one other comment. A properly designed winged reentry vehicle would have no trouble reducing drag while increasing lift so undershooting would not be a problem. The space shuttle has this capability.

Not the answer you're looking for? Browse other questions tagged mars spacecraft landing or ask your own question.

29
Can either Opportunity or Curiosity explore the state of Spirit?
12
How precise are our Mars landings?
2
Could a shuttle be built for Mars?

22
Olympus Mons - viable Mars landing site?
6
How would a manned Mars Lander be tested
4
Earth-based microwave radiometer for the Moon
17
What are the challenges to landing a spacecraft on Mercury?
3
How would vertical landing scale with size - does bigger = "easier" (actually)?
5
Would landing on mars during a storm considerably increase atmospheric drag?
2
Would it be better to build a Mars-fairing ship on land or in space?
0
Why a rover bounces after landing on Mars?
3
What would be the challenges for a settlement immersed in liquid fluorocarbon on Mars?