Is Cassini's 183rd burn; some kind of engine record?

I've just read that when Cassini makes its first close pass of Saturn's F-ring on December 4, it will be the 183rd engine burn which sounds like a lot for orbital maneuvers using a spacecraft's main engine.

This is not only excellent engine reliability, it's great from an orbital maneuver perspective as well. Each maneuver requires careful measurements, calculation, simulation, generation of instruction sets, execution, and follow-up measurements. That's a lot of work for the humans!

So has Cassini's long series of orbit maneuvers using repeated restarts of the main engine some kind of record for the engine?

In the New York Times article How Cassini Will Begin Its Date With Death on Saturn there is a cool 3D rotating GIF of the orbit.

Below is an unattractive 3D plot of the Horizons data, the NYT article and associated GIF are easier on the eyes, but too big to include here. 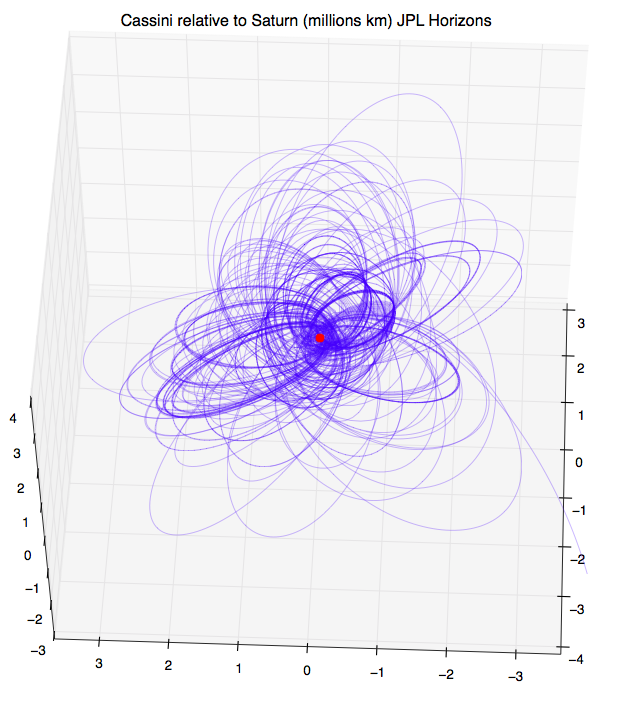 Not the answer you're looking for? Browse other questions tagged spacecraft orbital-maneuver cassini jpl-horizons or ask your own question.

9
How reliable are pressure fed hypergolic engines?
5
What spacecraft has had the greatest total propulsive delta-v?
0
Does Cassini have one or two identical main engines - if two, how does that work?
7
Unravelling Cassini's “ball of yarn” orbit around Saturn, tabulation of propulsive maneuvers?

4
Cassini's camera continuum band filters
15
Will Juno record its deorbit?
0
Does Cassini have one or two identical main engines - if two, how does that work?
0
Cassini's main engines' burns “can be blow-down or pressurized (with Helium)” - why?
7
Unravelling Cassini's “ball of yarn” orbit around Saturn, tabulation of propulsive maneuvers?
3
Why are there so many waveguide feeds (?) near the focus of Cassini's dish antenna?
4
Specific kind of orbital transfer?